Todays Though > News > Dolphins grades, stock up, stock down for loss at Cincinnati – Boston Herald
News

Dolphins grades, stock up, stock down for loss at Cincinnati – Boston Herald 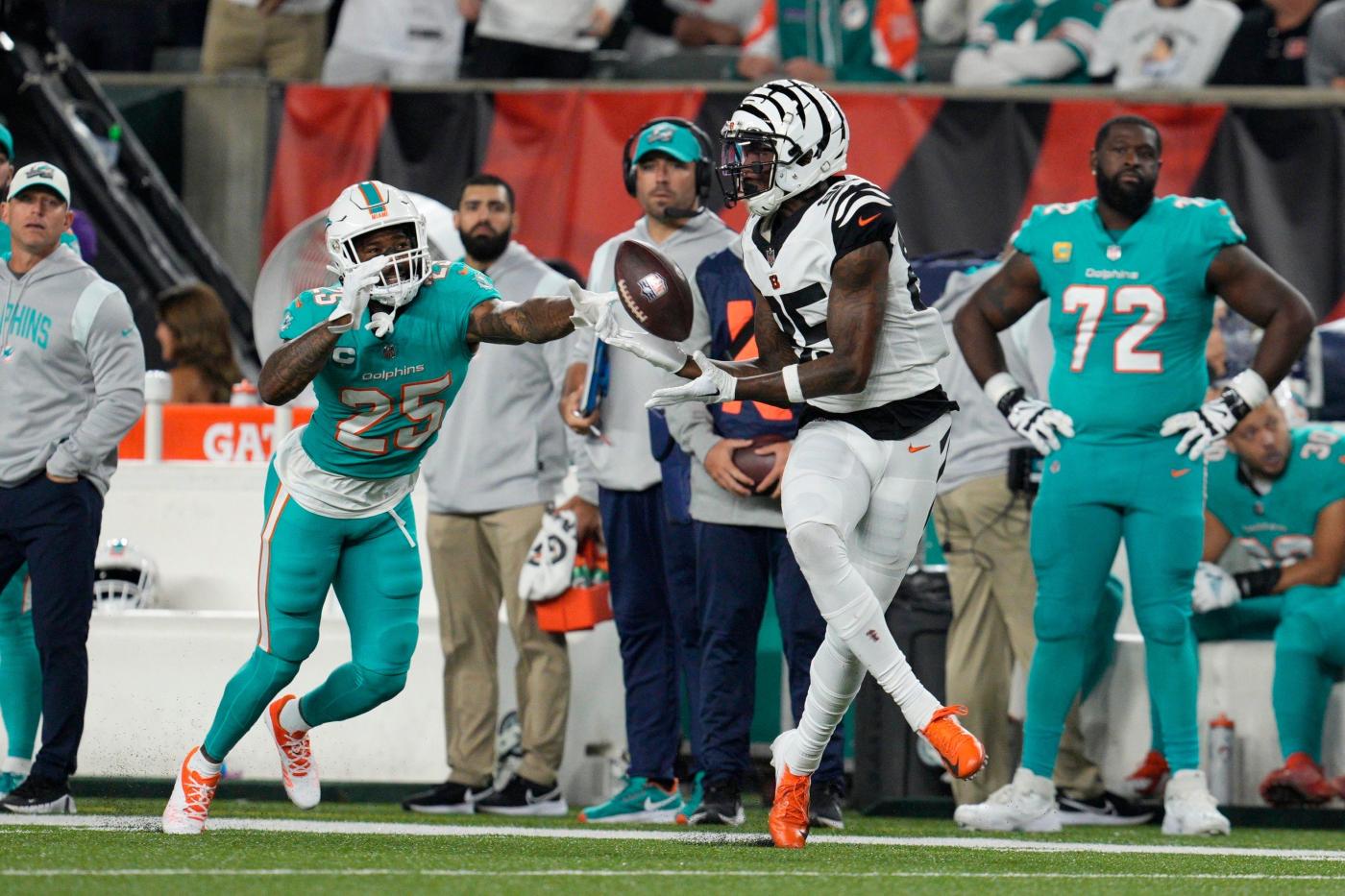 Well, the season just got a little more dramatic. The Dolphins’ 27-15 loss at Cincinnati could be a one-off, meaning it’s a fairly isolated incident, or it could be the start of a concerning pattern.

We know the Dolphins have injury issues starting with quarterback Tua Tagovailoa (head and neck injuries) and also involving All Pro cornerback Xavien Howard (groin). Those are concerning, and in Tagovailoa’s case it’s concerning in more ways than one.

The next month will provide insight into whether the Dolphins are an AFC contender or simply a team that got off to a hot start.

Whatever the case, they must play better than they did against the Bengals.

The numbers weren’t good between Tua Tagovailoa (8 for 14, 110 yards, no touchdowns, one interception, 52.7 passer rating) and Teddy Bridgewater (14 for 23, 193 yards, one touchdown, one interception, 84.1 passer rating). The interceptions were worse. And the one sack the Dolphins allowed put Tagovailoa out of the game. Each quarterback had his moment with an impressive pass or two, but unlike previous games, there weren’t enough moments. Wide receiver Tyreek Hill (10 receptions, 160 yards) was the saving grace. The Dolphins can still connect on big plays to stay in games or even win games. But there’s not much wiggle room. If the passing game struggles, the Dolphins will struggle to score.

This is concerning. The Dolphins totaled 85 yards rushing on 22 carries, an average of 3.9 yards per carry. Raheem Mostert and Bridgewater had 36 of those rushing yards on a pair of carries (a 25-yard carry by Mostert, and an 11-yard scramble by Bridgewater). The lack of a run game puts too much pressure on the passing game. The Dolphins continue trying to manufacture rushing with Hill, but until Mostert, Chase Edmonds (five carries, 6 yards) and the line get it together this will be an anchor the offense must carry. And it gets heavier each week.

Things were reasonably under control until the fourth quarter when quarterback Joe Burrow (20 for 31, 287 yards, two touchdowns, no interceptions, 115.9 passer rating) had completions of 43 yards, 36 yards, 22 yards and 14 yards. That doesn’t even account for Tee Higgins’ 59-yard touchdown in the second quarter. Howard not playing in the fourth quarter was a major factor. But Howard was burned by Higgins (seven receptions, 124 yards, one touchdown), who he shadowed most of the game, on that long touchdown. Ja’Marr Chase (four receptions, 81 yards) did his thing in relatively low-key fashion. The Dolphins didn’t blitz Burrow much and only totaled one sack. And one game after dropping numerous potential interceptions, they didn’t really get close to any interceptions against Cincinnati.

Defending the run: A

The Dolphins held the Bengals to 67 yards on 30 carries (2.2 yards per carry). Running back Joe Mixon (24 carries, 61 yards, one touchdown) was a bull on his 5-yard touchdown run in the first quarter. But he was stopped on a fourth-and-one. You’d like to be able to say more here but the Bengals’ run game was relatively inconsequential to the game’s outcome. So, while it’s good the Dolphins played well in this area, it didn’t matter.

It wasn’t a total disaster, but when you have a 52-yard field goal attempt blocked, miss an extra point and allow a 23-yard punt return, well, it’s not good. We saw Hill deep to return punts for the first time this season but he didn’t get to return either of his two chances. One special teams highlight was Thomas Morstead’s 66-yard punt, but that’s the one that was returned for 23 yards. Go figure. Kicker Jason Sanders made field goals of 23, 48 and 20 yards, but those missed opportunities on the field goal and extra point are more memorable.

Admittedly, coaching through injuries such as Tagovailoa and Howard is tough. However, that’s one of the job requirements. After finding answers in the first three weeks, coach Mike McDaniel, offensive coordinator Frank Smith, defensive coordinator Josh Boyer and special teams coach Danny Crossman ran out of answers against Cincinnati. We’ll soon see what, if anything, opponents have learned about beating the Dolphins.

It’s tough to believe Hill, the five-time All Pro and six-time Pro Bowl selection, could be regarded more highly. But after Thursday’s 10-reception, 160-yard performance, which included a 64-yard reception, it needs to be stated again that Hill is the Dolphins’ MVP.

The defensive backs had a rough fourth quarter after Howard left the game. Granted, the Dolphins were without their top two cornerbacks (Howard and Byron Jones), but they can’t allow those long passes in the fourth quarter. It’ll translate into losses such as it did Thursday.