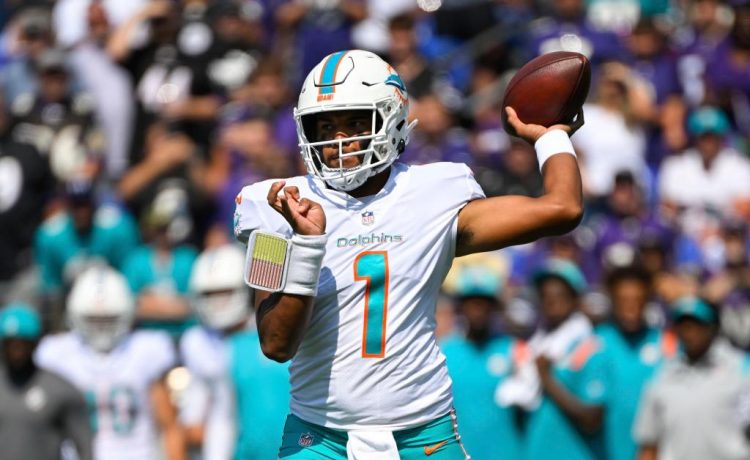 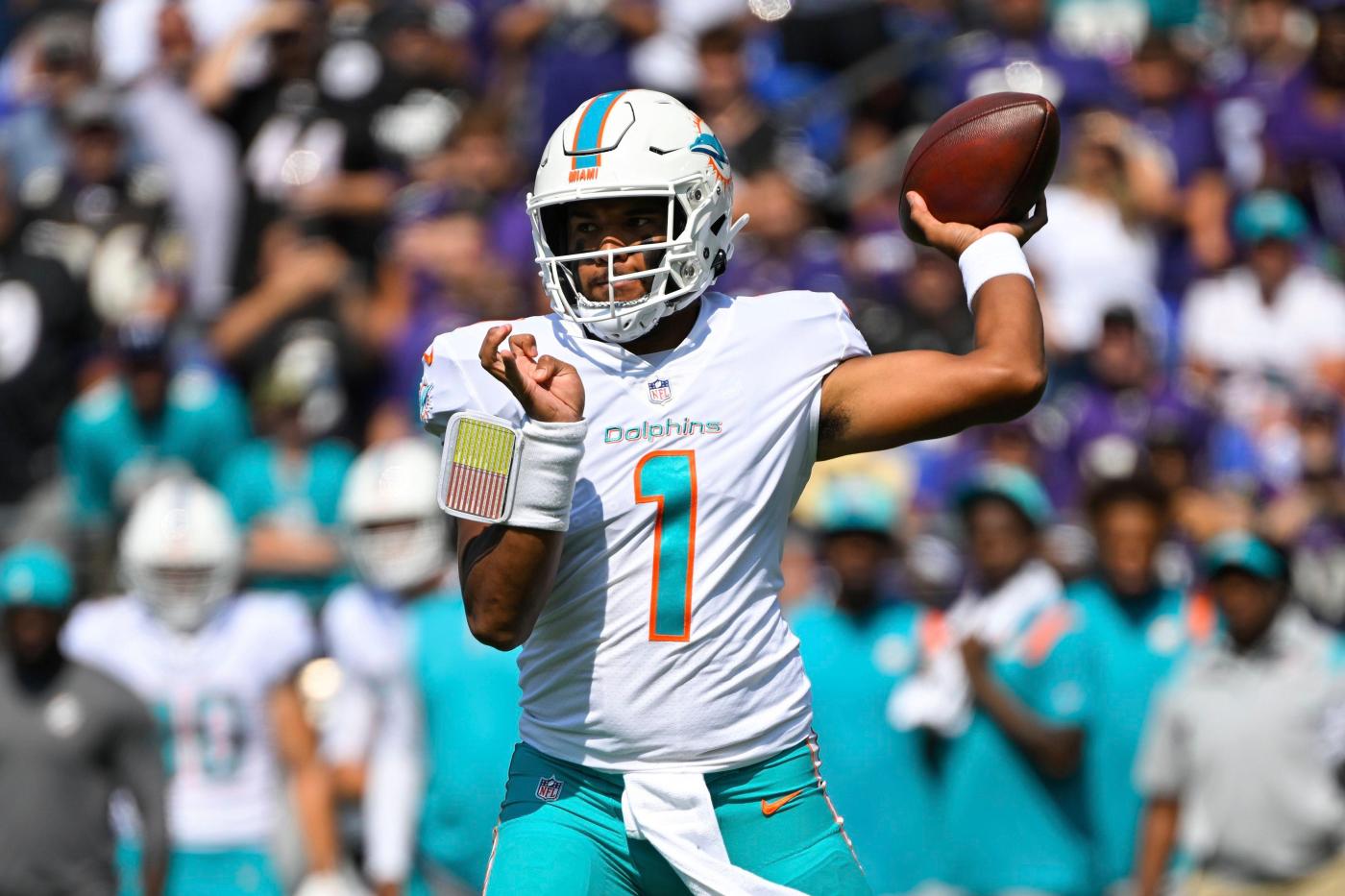 This will be a week of debate on what the Miami Dolphins’ ceiling is now after coming back from a three-touchdown deficit twice, including early in the fourth quarter, to a very good Ravens team for a 42-38 win in Baltimore.

The Dolphins were already expected to be in contention for a playoff berth. Can they compete in the conference? Are they now up there with the top dogs in the AFC after the stunning road win?

Quarterback Tua Tagovailoa had a game unlike anything that has ever been seen from him professionally. His 469 passing yards bested his previous career high by more than 100 yards. His six touchdowns were two more than his previous best and tied Hall of Famers Bob Griese and Dan Marino for franchise records. Four touchdown passes in the fourth quarter tied an NFL mark.

The Dolphins showed remarkable resiliency as the 21-point comeback was the franchise’s largest on the road and second-largest overall. Miami was the first team in 12 years to come back from down 21 in the fourth quarter, with the last 711 teams to face such deficits losing, according to ESPN Stats & Info.

We have now seen Tagovailoa, throwing to Tyreek Hill and Jaylen Waddle, pull off a comeback of such proportions, granting confidence this team can win a shootout if necessary. Meanwhile, the Dolphins’ more conventional style of winning will be to lean on the defense while counting on the run game and short passing game plus an occasional deep shot. Maybe they can do both.

It doesn’t get easier next as the Dolphins host the Super Bowl-favorite and AFC East-rival Bills. In the next big challenge, Miami can either prove it belongs with Buffalo or get humbled back to where it was before Sunday’s thriller.

What else is there to grade the passing game in a historic performance? Tagovailoa was 36 of 50, and he found Hill and Waddle for 11 receptions and two touchdowns each. Hill had 190 receiving yards and Waddle 171 in the case and point of how dangerous Miami’s offense is with the two complementing each other. Opponents simply cannot defend either 1-on-1 — or 1-on-0 for that matter, like on Hill’s tying touchdown where the Ravens watched him streak free deep.

Coach Mike McDaniel wanted to get Waddle more looks, and Tagovailoa targeted him a whopping 19 times. Tight end Mike Gesicki got back in the mix with four catches on his four targets, including the 14-yard touchdown in the back of the end zone. And practice-squad elevation River Cracraft scored a touchdown.

The two first-half interceptions, albeit poor decisions and throws by Tagovailoa, can easily be overlooked when he still finished with a 3-to-1 touchdown-to-interception ratio. If it was a two-interception game with some padded stats late as a comeback attempt fell short, this may be in the C range. But an all-time epic rebound? A. Enough said.

Playing from behind from the start played a part in the Dolphins’ only getting to run the ball 18 times, but the run game was effective for 86 yards, a 4.8 average. This matchup against Baltimore, Raheem Mostert was the featured back after Chase Edmonds got the bulk of the workload in the Week 1 win against the New England Patriots. Mostert went for 51 yards on 11 carries, and Edmonds had 33 on five attempts, mostly on the key 28-yard scamper on the final drive that set Miami up for the winning Tagovailoa-to-Waddle touchdown connection. Tagovailoa and fullback Alec Ingold each converted fourth-and-1 run plays on Sunday.

Ravens quarterback Lamar Jackson had a perfect passer rating through the early portion of the fourth quarter. The Dolphins started off with the blitz-heavy approach that frustrated Jackson when the two teams met last year, but this time, he was ready for it. When Xavien Howard blitzed from his cornerback spot on the boundary, Jackson caught it immediately, on top of various other examples as Jackson finished 21 of 29 for 318 yards and three passing touchdowns. The blitzes didn’t work to pressure Jackson, and Miami never sacked the elusive passer. Howard, who was burned on the 75-yard touchdown by Rashod Bateman, and Melvin Ingram were the only defenders to deflect a pass. The only thing saving the Dolphins from an F is back-to-back incompletions on second and third down late when trailing by 7 to force a Baltimore punt.

The final numbers of 6.2 yards per carry are largely inflated by Jackson’s 79-yard touchdown run. Of course, one can’t simply ignore that the Dolphins allowed it to happen, but they held strong in run defense for much of the afternoon. Kenyan Drake, Mike Davis and Justice Hill combined for 28 yards on 14 attempts. Miami clamped down for fourth-down stops once at the goal line when Jackson fumbled the first-half sneak attempt and then when Elandon Roberts and Trey Flowers stuffed Jackson on a fourth-quarter fourth-and-1 stop that preceded the first Hill touchdown.

Can’t let an All-Pro return specialist like Devin Duvernay beat you on the opening kickoff for a 103-yard touchdown. The Dolphins learned their lesson and kicker Jason Sanders booted the following three kickoffs for touchbacks. The grade is essentially entirely a reflection of that blunder. Sanders didn’t get to attempt a field goal while Baltimore’s Justin Tucker nailed his one 51-yard attempt late. Punter Thomas Morstead was fine with one of his two punts inside the 20 as he averaged 41 yards on those attempts.

McDaniel brought his team together to come from behind with a simple message of not worrying about the score and just playing sound football. Sticking with the same defensive scheme as last time against Jackson worked to the Dolphins’ detriment for much of Sunday. They did make second-half adjustments to get the necessary stops for the comeback.

You thought he was heavily discussed nationally before? Tagovailoa’s really going to be the topic of every sports talk show throughout the week after his career-best performance. Whatever you thought about him before, your opinion today of the the third-year quarterback has to be that he’s better than previously believed. Even if most of the key big plays were wide open, he made those throws.

Howard got burned on the long touchdown to Bateman. This is not too big of an indictment on him as he’s only “stock down” coming from a place where his stock is very high on this team. In order for the Cover-0 blitz scheme — or any defensive call without safety help over the top to work — the cornerback has to lock down his man. He almost made one of his patented game-changing plays late, but drop the interception that could’ve been returned for a touchdown.