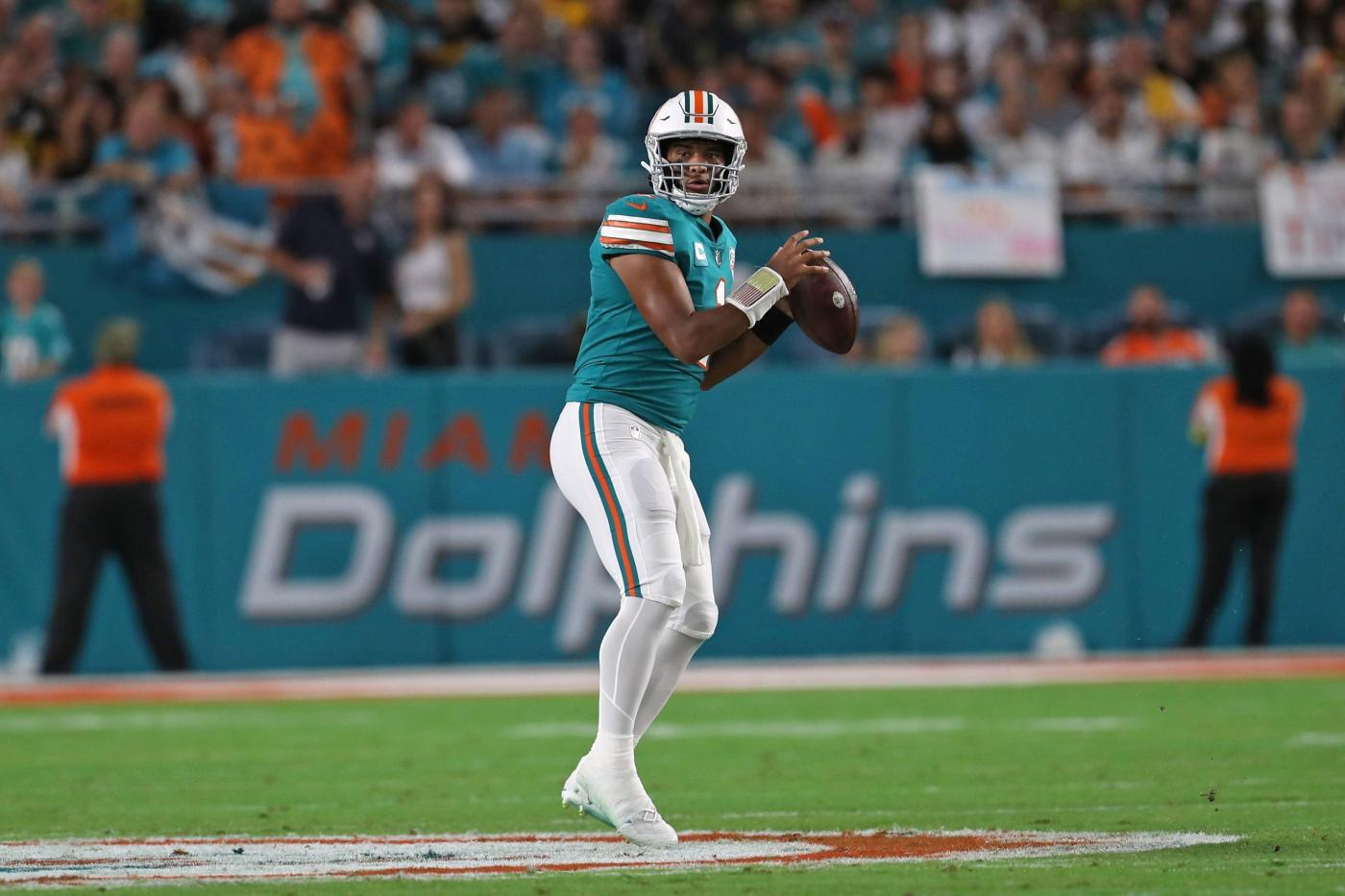 It wasn’t perfect, but the 2022 Miami Dolphins honored the 1972 team the best way they could.

They did what the Dolphins from 50 years ago did all 17 times they took the field: They won.

With quarterback Tua Tagovailoa back from missing two games with a concussion, the Dolphins started strong and held on late to top the Pittsburgh Steelers, 16-10, on Sunday night at Hard Rock Stadium.

Miami (4-3), edging the team where former coach Brian Flores found a landing spot as an assistant, snapped a three-game losing streak and earned the franchise’s 500th win all-time. The Dolphins, hosting their first Sunday night game since 2017, earned their first win on “Sunday Night Football” since a 2004 victory over the Cleveland Browns.

Tagovailoa went 21 of 35 for 261 yards and a touchdown. While he wasn’t intercepted, he had several close calls with Steelers defenders dropping chances at picking him off. The third-year lefty passer also had an eventful 15 rushing yards, twice lowering his shoulder on scrambles in attempts to pick up first-down yardage.

“It felt good running out the tunnel,” Tagovailoa said of returning to action from the scary scene in Cincinnati where he was taken off the field on a stretcher. “The atmosphere was great. Had a lot of support from the fans, and just being able to be out there with my teammates, it was awesome.”

A defense depleted by multiple injuries at cornerback while missing defensive end Emmanuel Ogbah and having safety Brandon Jones go down in the second half with a knee injury held on with late stops and forced three turnovers.

“We’ve been working on a lot of open-field tackling and getting turnovers,” coach Mike McDaniel said. “I thought, collectively, the entire defensive staff and the defensive players put forth a very winning effort, so it’s encouraging.”

Steelers rookie quarterback Kenny Pickett was 32 of 44 for 257 yards, a touchdown and three interceptions, the last of which was grabbed by cornerback Noah Igbinoghene, tapping both feet in bounds on a pass to the pylon with 18 seconds left.

“At first, I didn’t think I caught it because the referee right there said it was out,” said Igbinoghene, who had the gratifying moment after struggling through his first two-plus seasons in the NFL. “I saw the review and I saw everybody get excited and I got excited as well. I got this interception and it’s my first one. It’s a blessing.”

On Pittsburgh’s penultimate chance, the Steelers drove down to Miami’s 15-yard line, but back-to-back penalties from third-and-1 — an illegal shift and then a hold — put Pittsburgh into a third-and-16. Pickett was intercepted by Dolphins safety Jevon Holland.

The Dolphins then went three-and-out to give the Steelers a final chance. Pickett converted a fourth-and-6 to tight end Pat Freiermuth earlier in the final sequence to keep Pittsburgh alive ahead of Igbinoghene’s game-sealing interception.

“It’s a big deal,” said McDaniel of the big play for the former first-round pick who has tried to shed the label of being a bust. “He does his best to ignore the noise, but nobody is oblivious and he really, really wants to do big things in this league.”

Sunday night started with Tagovailoa going 6 of 7 on the opening drive for 68 yards and throwing a touchdown to running back Raheem Mostert in the flat that he took 8 yards for the score. Tagovailoa had completions to Jaylen Waddle for 20 yards, Tyreek Hill for 17 and tight end Mike Gesicki for 18 yards as he found soft spots in the Pittsburgh zone defense early, oftentimes off run-pass-option action plays.

“We were just getting a lot of zone, so it’s just getting in there, sitting down where I need to sit,” Waddle said. “I think [McDaniel] did a good job of play design, putting us all in position to make plays.”

Miami special teams ace-turned-nickel cornerback Justin Bethel came up with an interception that was sandwiched by a pair of first-quarter field goals that extended the Dolphins lead, 13-0. Bethel, who has been forced into defensive snaps due to injuries at cornerback, was running downfield with Steelers receiver Chase Claypool, who fell on his route as Pickett’s pass went up.

The Bethel interception was the Dolphins’ first since the opening defensive series of the season for Miami, when cornerback Xavien Howard tipped a pass to the end zone for a pick from Holland against the New England Patriots. It was the first takeaway overall since Week 3 against Buffalo.

Still moving the ball well early, the Dolphins settled for field goals on their second and third drives of the night. Then, those holes that were open in the middle of the field started closing up.

“I think they made really good adjustments defensively, but there were just little misses here and there that we had offensively,” Tagovailoa said. “A lot of the misses could have turned into really big plays. Just better execution, and it starts with me.”

Tagovailoa showed no signs of playing timid after coming back from a head injury that sidelined him nearly a month between games, exhibited by the two instances he vied for extra yards on the ground.

“I can see the first down, and to me, they were close calls where it’s like, ‘OK, maybe if I do just put my shoulder down, hopefully I can get forward progress with this,’ ” he said. “But that was all it was. I wasn’t trying to be Superman or a superhero out there.”

The Steelers methodically drove down the field on a 13-play, 86-yard drive that consumed 7:29 of the second quarter and was capped by a Pickett touchdown pass to rookie wideout George Pickens, 1-on-1 against Igbinoghene.

Adding another field goal from Jason Sanders before halftime, the Dolphins led, 16-10, at the time that the 1972 undefeated team was honored at intermission. But McDaniel passed up the opportunity to tack on three more and make it a two-possession game in the middle of the third period.

Facing fourth-and-3 from the Pittsburgh 14-yard line, the Dolphins ran an inside run to Chase Edmonds that went nowhere, turning the ball over on downs.

“I’m very aware that it’s one of those things that, if it works, it’s a great play, and if it doesn’t, it could be a deciding factor in the game,” McDaniel said. “It was something that I felt pretty good about it working out. It didn’t, so that’s something that I take full responsibility for.”

Jaelan Phillips recorded a sack early in the second half when Zach Sieler applied interior pressure and Phillips was there on the outside to clean it up. Phillips later split another sack with Christian Wilkins.

The Dolphins next head to Detroit to play the Lions (1-5) in the first of back-to-back road games against NFC North teams, with the Chicago Bears (2-4) to follow Nov. 6.