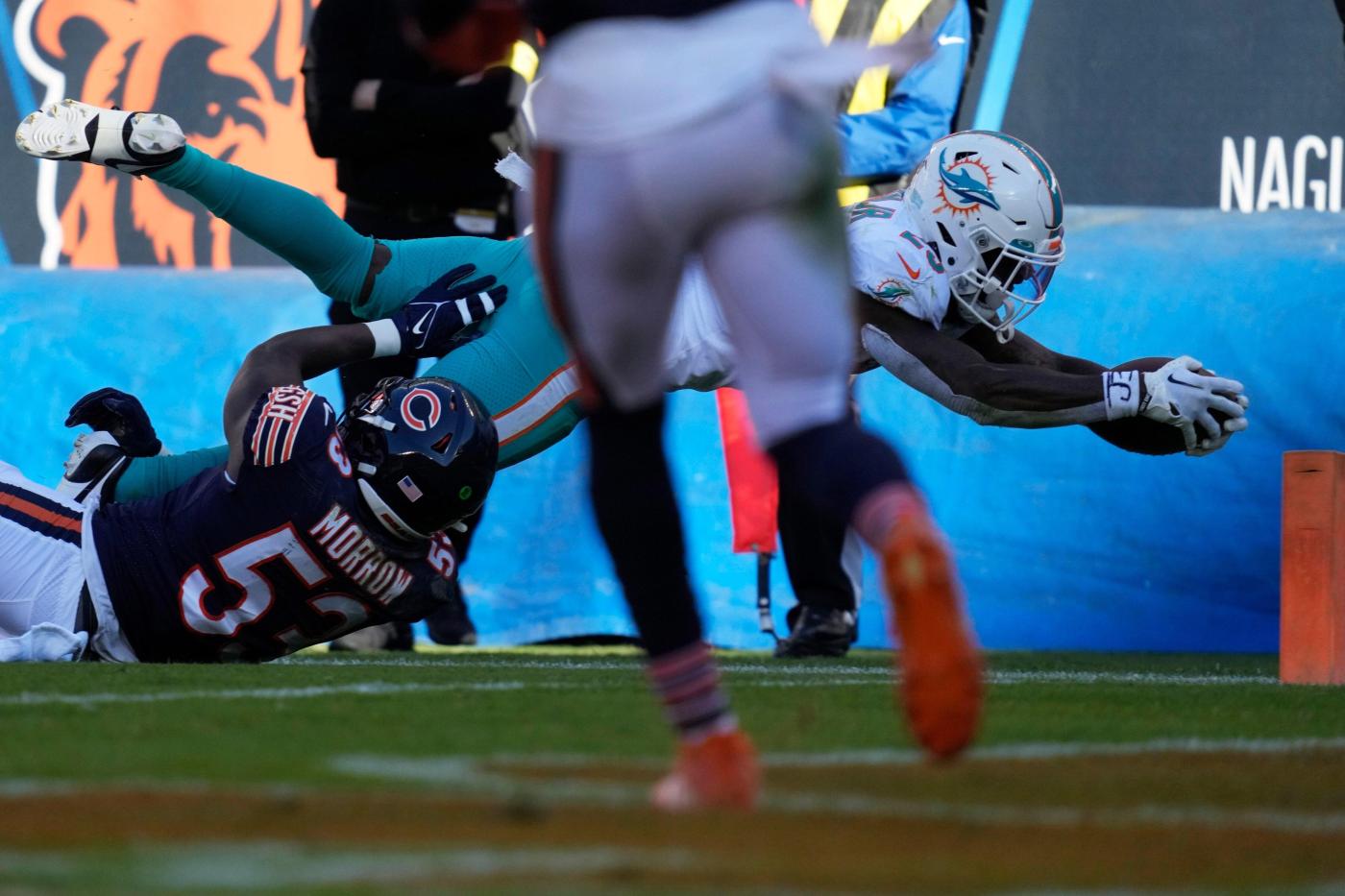 “I don’t try to do it too much when everybody’s here because I don’t want it to look like a distraction,” Wilson said with a laugh about the scooter.

“But, yeah, I normally stay up here pretty late so when everybody leaves I’ll be having fun. It’ll be like on a racetrack around the locker room. It’s cool.”

The scooter isn’t the only thing that shows Wilson has a different mentality.

There’s three plays you could choose among to find the most impactful one Wilson made in his debut last week at Chicago:

—There’s the 10-yard touchdown reception punctuated by his stretching, diving reach for the end zone;

—There was the block that planted cornerback Jaylon Johnson into the Soldier Field turf and allowed quarterback Tua Tagovailoa to complete a 22-yard pass to wide receiver Tyreek Hill.

If you know anything about Wilson’s demeanor and playing style, you know his favorite among those plays.

“The block,” Wilson said. “Definitely the block. Because that’s a play you don’t see a lot of people want to make, and that’s something I want to make. It gives me excitement. It gives me a different type of thrill when I make a block like that.”

The Dolphins love to hear such sentiment.

The hope is Wilson can complete the Dolphins’ pass-dominant offense.

As much as edge rusher Bradley Chubb was brought in at the trade deadline to spark the pass rush, there’s hope Wilson, who worked out with Chubb in preparation for the NFL Combine in 2018 at Exos in Carlsbad, Calif., will spark the run game, a run game that’s 29th in the league at 86.9 yards per game.

You can be sure coach Mike McDaniel wants more out of the run game. When he was offensive coordinator with San Francisco last season they were seventh in the league in rushing on their way to the NFC Championship game.

Compare that to this season when it took the Dolphins until Week 5 to total 100 yards rushing as a team with a season-best 137 yards against the New York Jets. That also the game running back Raheem Mostert, the Dolphins’ only 100-yard rusher this season, had 113 yards rushing.

Wilson said Mostert was pretty much his first friend in the league, the guy who took him out to breakfast and told him how the NFL works and how to stay in the league soon after Wilson signed with the 49ers in 2018 as a rookie free agent from the University of North Texas.

The reunion among McDaniel, Mostert and Wilson has been good on a personal level. We’ll see whether it translates to a business level.

Wilson’s physical running style, ability to catch the ball out of the backfield, and willingness in pass protection are distinguishing characteristics.

All he needs to do is get more familiar with the offense.

The terminology is one place he’ll start the re-acquaintance.

“It’s similar,” Wilson said of the terminology, “but it’s not the exact same at all. So I’ve got to hone-in on all those little details and things. That way I can try to be at my best to try to help this team.”

The rushing attack needs to become a factor in the offense.

The Dolphins have rushed for more than 100 yards in three of the past five games, but the run game has hardly been a factor all season. It doesn’t set up the passing game, it doesn’t give the defense anything to think about, it doesn’t force the defense to drop a safety down into the box, and it doesn’t move the chains on a regular basis.

Wilson knows how to gain ground in many ways.

He got the scooter for free from Bird.

“I ain’t gonna give out the sauce,” he said in reference to exactly how he got the scooter. But it involved sending them a nice note.

“I just got in contact with them and sent ‘em a sweet message and got a sweet ride,” he said laughing.

The scooter, which was used for a brief locker room ride Thursday by defensive tackle Raekwon Davis, was delivered a few days ago.

And as for his role with the Dolphins, Wilson said there’s no pressure to do big things.

“It’s just come in, do what you do, and learn and just play football,” he said. “Let the chips fall where they may. I’m not a person who is too big on worrying about the stuff I can’t control. I’m going to come in here and learn as much as I possibly can, that way when I go out there I’m playing freely and I’m not thinking too much, and I can be me.”

Most likely, the latter won’t be an issue.