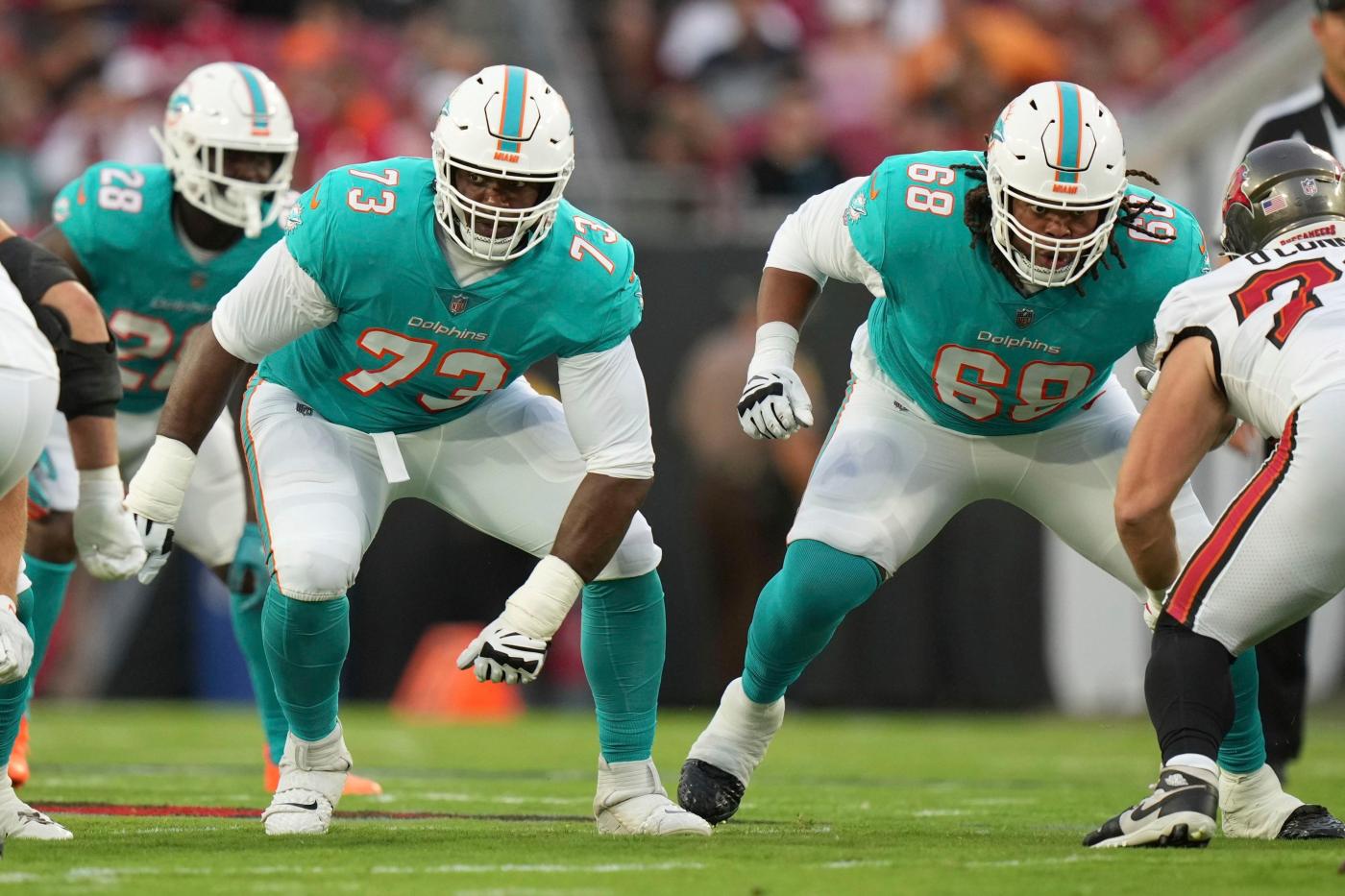 The Miami Dolphins are optimistic the ankle injury right tackle Austin Jackson sustained in the second quarter of Sunday’s 20-7 win over the New England Patriots isn’t too serious, but they’ll take a cautious approach monitoring it this week.

“Serious enough that we’re getting some more eyes on it,” coach Mike McDaniel said Monday evening. “We’ll be continuing along the process to have the best medical information on him moving forward.”

Jackson, who seemed to be limping on his right leg in the locker room after the game, appeared to get rolled up early in the second quarter on a 2-yard run by fullback Alec Ingold. Jackson was slow to get up and reached for his right foot/ankle before joining the huddle.

He played one more play, a Raheem Mostert 3-yard run, then grabbed again at his lower right leg and signaled for a substitution. He walked to the sideline under his own power but was escorted by medical staff before coming back out to the sideline without re-entering.

“He was tough,” McDaniel said. “He stayed in uniform and could’ve gone back in in an emergency situation.”

Dolphins tight end and special teamer Cethan Carter is in concussion protocol, McDaniel said on Monday. Carter left Sunday’s game with a head injury on a kickoff return in the second quarter.

In the protocol, Carter now must undergo a five-step process that includes being granted clearance by a team physician and independent neurological consultant.

“That is, of all things, the most case-by-case basis,” McDaniel said. “We’ll be taking it as such moving forward.”

Jackson’s injury led to an abundance of shuffling on the offensive line throughout Sunday’s game. First, Greg Little entered for him at right tackle. Little went down momentarily, so Robert Jones went in at right guard with Robert Hunt going to tackle. Later, with Little now back, Terron Armstead went to the sideline, and Jones was sprung back into action at left guard, with Liam Eichenberg kicking out to Armstead’s left tackle post.

“We all get paid to do what we do,” Hunt said Monday. “We got a room full of guys that are capable of playing any position. Guys did a really good job of being ready when their name was called.”

Dolphins players were understandably fired up about McDaniel’s decision to go for it on fourth-and-7 from the Patriots’ 42-yard line, and the resulting touchdown pass from quarterback Tua Tagovailoa to wide receiver Jaylen Waddle. But it wasn’t the only time McDaniel was going for it on fourth down — apparently.

Recall New England drawing a five-yard penalty for a neutral zone infraction in the first quarter on fourth and one from the 50. Of course, there’s a chance the Dolphins were looking for the penalty and free first down.

Whatever the case, the drive resulted in a 43-yard field goal from Jason Sanders and a 3-0 lead instead of a punt.

Waddle did his trademark “Waddle” after scoring on the dramatic 42-yard touchdown. He was asked Sunday whether the celebration is here on a permanent basis for his second NFL season. In a strange twist, he indicated fan demand might be too strong to keep it going.

“I don’t know,” he said. “It gets kind of crazy when I see people out, they try to tell me to dance and stuff.”