Todays Though > News > Dolphins must get better after this 49ers loss, and they say that’s exactly what they’ll do – Boston Herald
News

Dolphins must get better after this 49ers loss, and they say that’s exactly what they’ll do – Boston Herald 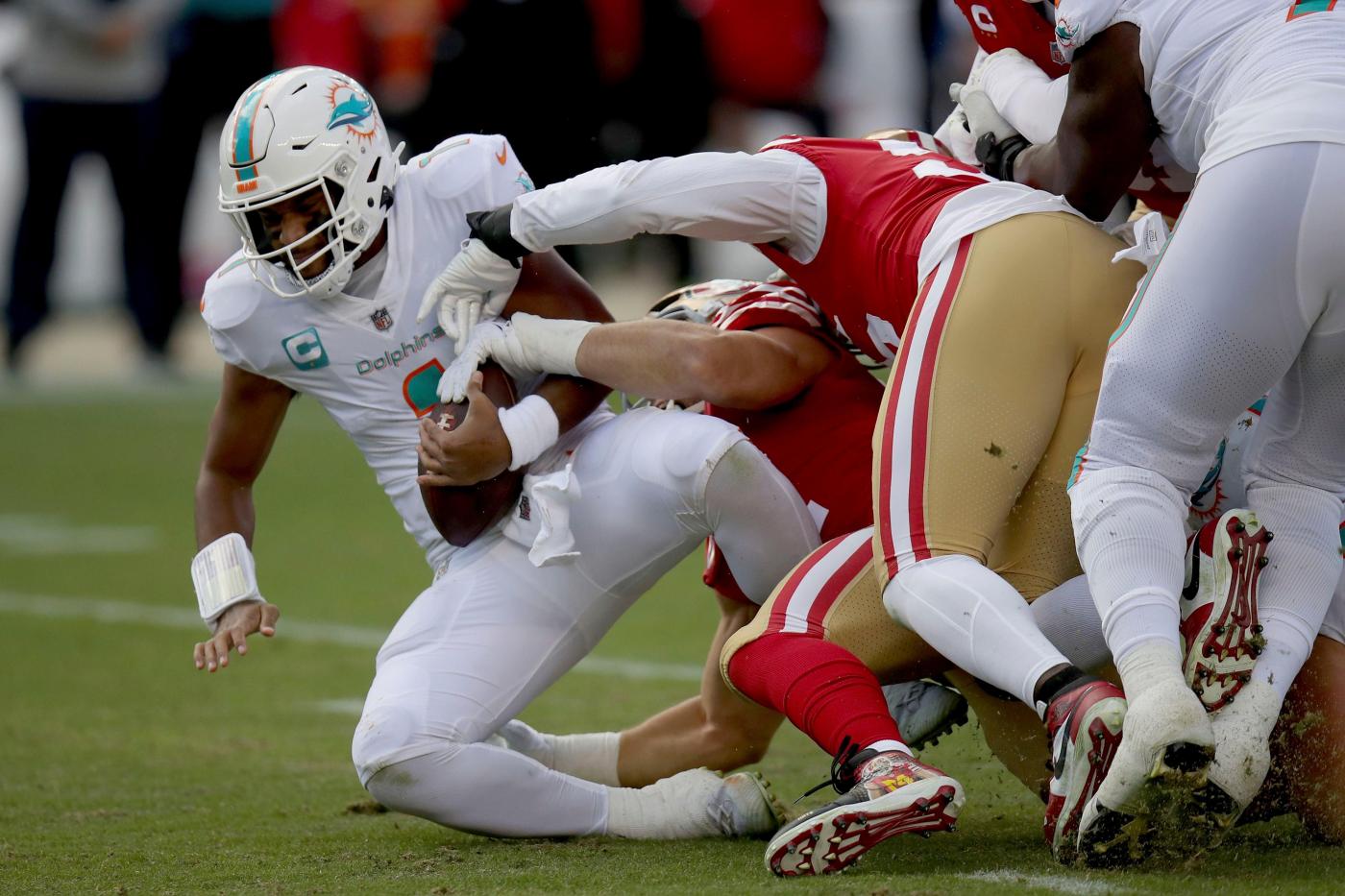 As Dolphins players searched for answers through the disappointment and confusion of Sunday’s 33-17 loss to the San Francisco 49ers, there was one conclusion in the postgame locker room — they must do better. All of them.

That was the overriding message, that there’s more football left, and for the Dolphins to get to where they want to get — the playoffs — they must be better.

You trust they’ll take the message to heart. This team has been good about learning from its mistakes all season, and you have to think this loss will bring the same result.

The Dolphins (8-4) had their five-game winning streak ended Sunday by the 49ers, and the Dolphins lost their chance to maintain first place in the AFC East. In their five remaining regular-season games, the Dolphins must find a way to downplay their weaknesses and play to their strengths.

That was easy against the likes of Houston, Cleveland, Detroit, Chicago and Pittsburgh, the opponents in the Dolphins’ five-game winning streak.

It’s tougher against a team such as San Francisco, which brings what might be the NFL’s best defense. The Dolphins said they’ll use the loss as a learning experience and plow ahead.

“This is December football,” said defensive tackle Christian Wilkins, whose 12 tackles tied with linebacker Jerome Baker for the team lead. “If we want to be the team we can be and want to be, we’ve got to have experiences like this.”

Give the Dolphins credit for sticking together and keeping a good mentality. That’s been the case all season, and through the deafening silence of Sunday’s locker room it seemed be the case again.

There was a quiet resolve to get things corrected, not finger-pointing or a blame game. And the blame could have been aimed in multiple directions.

The Dolphins’ running game only accounted for 33 yards on eight carries. It must be better.

The Dolphins’ run defense allowed 121 yards. It must be better.

The Dolphins were 0-of-7 on third downs. That must be better.

The offense, which had its streak of at least 30 points in four consecutive games come to a halt, is now on a two-game stretch that’s seen uneven and inconsistent play. The offense only scored two touchdowns in the 30-15 victory over Houston, and one touchdown came after the defense set them up on the 3-yard line. Against the 49ers, the offense scored on a 75-yard touchdown pass from Tua Tagovailoa to wide receiver Trent Sherfield and a 45-yard touchdown pass from Tagovailoa to wide receiver Tyreek Hill. Aside from those two plays, the offense didn’t do much. It must be better.

Tagovailoa wasn’t good on this day. He finished 18-of-33 for 295 yards, two touchdowns, two interceptions and a 79.7 passer rating. He was outplayed by San Francisco third-team quarterback Brock Purdy, the rookie from Iowa State — Mr. Irrelevant, the nickname given the last player taken in the draft. Purdy, who got the nod after starter Jimmy Garoppolo went out in the first quarter with a foot injury with backup Trey Lance already sidelined with a leg injury, threw darts into tight windows and ended 25-of-37 for 210 yards, two touchdowns, one interception and an 88.8 passer rating.

“He won the game for them,” Howard said.

Tagovailoa, on the other hand, had overthrows, underthrows and a bad decision or two we hadn’t seen in the previous few games. He must be better.

On and on it goes.

Right tackle Brandon Shell said they must be better on the offensive line, even though their best player, left tackle Terron Armstead, was out with a pectoral injury. The offensive line/pass protection allowed three sacks.

Running back Jeff Wilson Jr., who said he had two errors that led to ugly plays (one was a sack), said the running backs must be better. Wilson only had one carry for 3 yards. Raheem Mostert had seven carries for 30 yards.

But you can feel pretty confident they’ll get to work Monday, finding ways to cover up the things that cost them Sunday. It’s what they’ve done all season, they’ve learned from their losses.

“It hurts, for sure,” linebacker Jaelan Phillips said. “Losing any game hurts, but we’ll just recoup and move on to the next one. We’ll be good.”