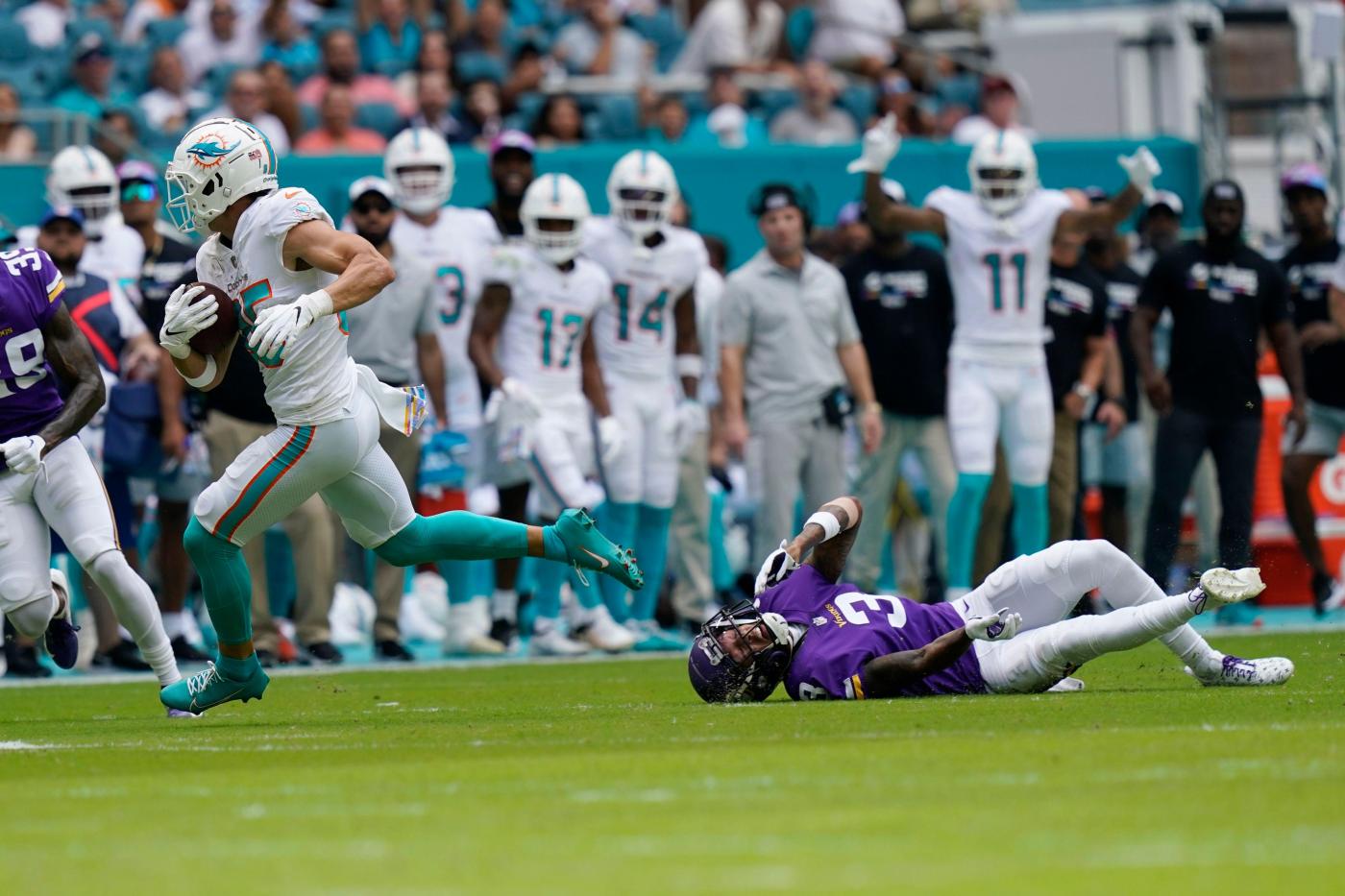 Edge rusher Bradley Chubb is the big name the Dolphins acquired from Denver at Tuesday’s trade deadline, but don’t forget about running back Jeff Wilson Jr., acquired from San Francisco, and what he could do for the offense.

“I’m downhill,” Wilson said when describing his running style. “I don’t like to play too many games. I like to get to where I’m going and get there as fast as I can.”

Coach Mike McDaniel said Chubb and Wilson will play Sunday at Chicago, although McDaniel isn’t sure how much either will play.

“It will be somewhere between zero snaps and what they’ll normally get in a given week, just somewhere in that range,” McDaniel quipped. “But it’ll be more than zero snaps.”

Wilson, the fifth-year player who has 468 yards rushing on 92 carries (5.1 yards per carry) with two touchdowns, could help in all of those areas, and he provides the physical presence to complement the speedy presence of starter Raheem Mostert.

The prospect of an effective running game added to an offense that’s struggling to consistently score touchdowns despite having quarterback Tua Tagovailoa and wide receivers Tyreek Hill and Jaylen Waddle is a scary thing.

The run game doesn’t just add another threat to the offense, it adds a threat to the passing game because it raises the effectiveness of play action.

And an effective run game forces the defense to make the difficult choice between dropping a safety into the box to stop the run, or keeping the safety deep as an added tool to defend against Hill’s blazing speed.

The two, along with Mostert, who took Wilson out to lunch and explained how the NFL works when Wilson was a rookie, are happy to be reunited.

“When I first came in the league, those were the guys I knew,” Wilson said.

Chubb faced Wilson, who also has 10 receptions for 91 yards, earlier this season.

“He’s just one of those guys that when we game-planned against them, we said it’s going to take the whole group, the whole defense to bring 22 down,” Chubb said, referring to Wilson by his jersey number in San Francisco.

Linebacker Jaelan Phillips is questionable for Sunday’s game at Chicago due to a quadriceps injury, according to Friday’s injury report. Friday is the first day Phillips appeared on the injury report. Phillips is expected to combine with Chubb on Sunday to give the Dolphins a glimpse of their future pass rush.

Elsewhere, wide receiver River Cracraft, who hasn’t practiced all week due to an illness, is out, and right tackle Austin Jackson, who was limited Friday, his only practice of the week, as he battles ankle and calf injuries, is listed as doubtful.

Armstead appeared on the injury report with an Achilles ailment Thursday, the first time he’s been listed with that problem. Armstead has been battling a toe injury most of the season, which required him to stay overnight in New York after the Jets game to see a specialist.

The Achilles injury is just another issue for a team that’s been hit hard by injury issues the last few weeks. But McDaniel said he’s not concerned because Armstead knows how to handle himself.

“It’s something he’s always managed,” McDaniel said of the Achilles problem. “It’s the wear and tear of the football season.”

Armstead was asked Thursday whether the toe injury is something he’ll be dealing with all season.

“I hope not,” he said. “I hope it continues to improve. It’s tricky, man. It’s a tricky injury, especially for a bigger guy. It’s been tough. It’s been challenging to deal with, but as long as it’s functional, I’m rolling.”

McDaniel said he scouted Chicago Bears quarterback Justin Fields at a camp when Fields was 17 years old. He said he also scouted Fields when Fields was coming out of Ohio State. McDaniel, who routinely unloads humorous one-liners during his press conferences, was asked how much Fields has grown since then.

Keeping up with the Joneses

Now it’s Robert Jones’ turn. With safety Brandon Jones (knee) out for the season and cornerback Byron Jones (Achilles) still out for an undetermined amount of time, a new Jones steps into the spotlight.

Robert Jones, a Chicago native, will start at left guard in Liam Eichenberg’s place against the Bears. Eichenberg sustained a knee injury against Detroit and has been placed on injured reserve.

Robert Jones, who substituted for Eichenberg in the fourth quarter last week, got a full week of practice as a starter this week and it should make a difference.

“It’s definitely beneficial,” McDaniel said. “It’s not to the degree like when you’re talking about a quarterback working through a week calling plays and doping all those things.

“But, of course it’s advantageous.”

Practice players of the week

Wide receiver Erik Ezukanma, defensive lineman Ben Stille and linebacker Sam Eguavoen were wearing camouflage jerseys Friday, which are symbolic of players who have had the best week of practice.

Long snapper Blake Ferguson was announced as the Dolphins’ nominee for the 12th annual “Salute to Service Award presented by USAA,” which honors the league member who demonstrates an exemplary commitment to honoring and supporting the military community.