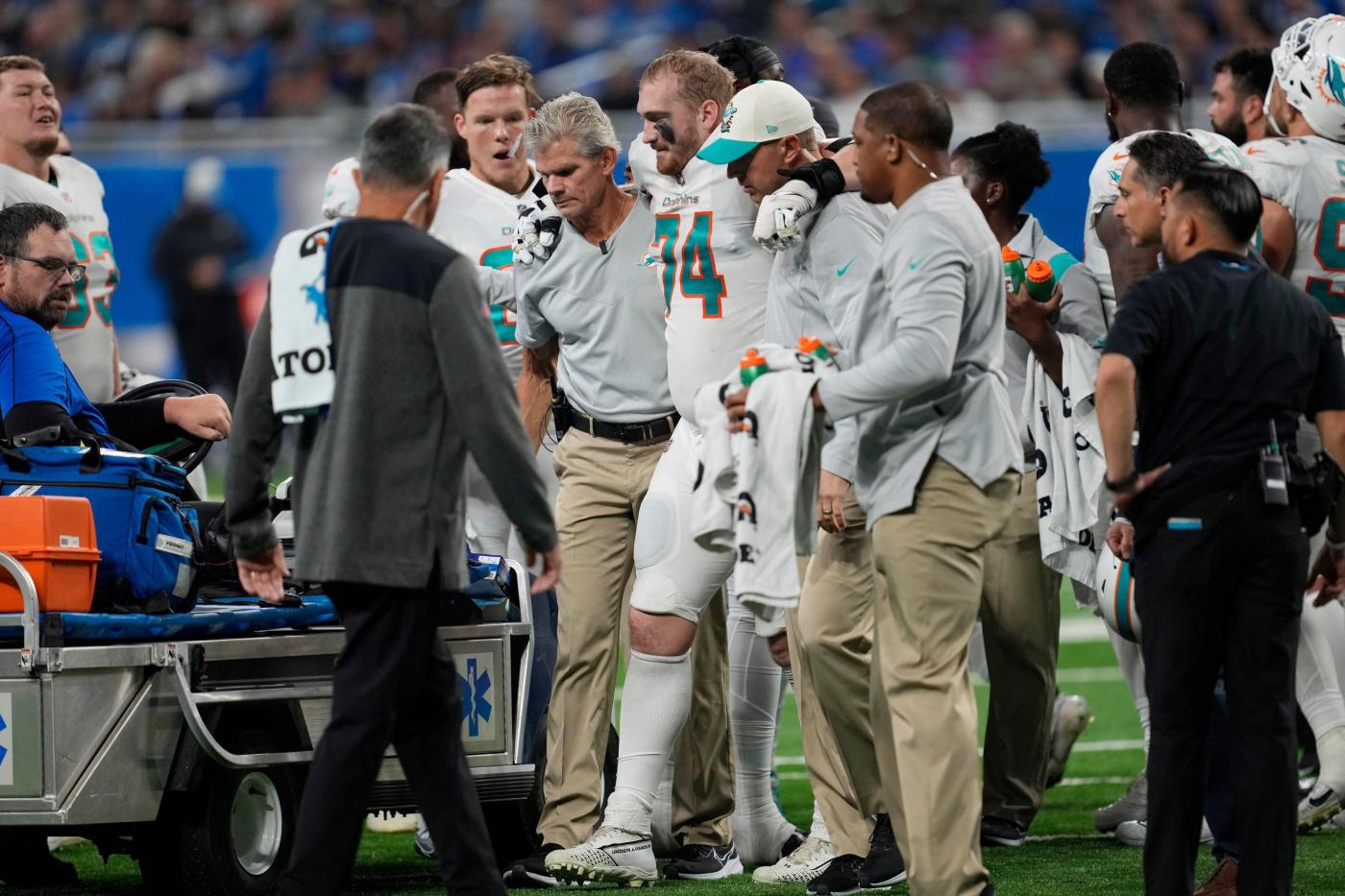 The Dolphins seemingly got some good injury news Monday when coach Mike McDaniel said left guard Liam Eichenberg will be sidelined with a knee injury, but seemed to say the injury isn’t season-ending, and said right tackle Austin Jackson, who has been sidelined with an ankle injury, will return to practice this week.

If and when both return it’ll be the first time since the opener the Dolphins have had their starting offensive line intact. For the record, the offensive line has done some of its best work recently. The Dolphins have rushed for more than 100 yards in three of the last four games, and quarterback Tua Tagovailoa has only been sacked twice and taken three hits.

McDaniel was asked about a report that said Eichenberg, the second-year player from Notre Dame, sustained a MCL (medial collateral ligament) injury.

“I can confirm that,” McDaniel said, adding the injury was “on the positive side of bad news.”

Eichenberg, drafted as a tackle and switched to guard this year, was injured late in the third quarter on Tagovailoa’s 11-yard touchdown pass to tight end Mike Gesicki.

Robert Jones replaced Eichenberg against the Lions and played 15 snaps. Jones could be the starter until Eichenberg returns.

Jackson, the starting right tackle who was injured in the opener against New England, has been on injured reserve. He returned to practice last month, starting a 21-day window after which he either must be placed on the 53-man roster or on season-ending injured reserve.

Jackson has been replaced by Greg Little and, most recently, Brandon Shell.

McDaniel has nothing to offer on trade deadline activity

The Dolphins were mentioned by NBC’s Peter King among the teams possibly interested in trading to acquire Denver edge rusher Bradley Chubb, but Chubb, who is in the final year of his contract, would come with a $7 million rental fee.

The trade deadline is 4 p.m. Tuesday.

Predictably, McDaniel didn’t delve into trade deadline specifics Monday saying he’s focused on the current roster and the next opponent.

“Right now, I’m exclusively a football coach,” he said, “and we have conversations where I’m focused on our team as it stands and the Chicago Bears, who are going to be trying to beat us here in a day less than a week.”

The Dolphins’ pass rush could use a boost. They had one sack and four hits on Lions quarterback Jared Goff. The pass rush help, theoretically, could come from the front end or the back end. Addressing the latter, McDaniel said he doesn’t expect cornerback Byron Jones (Achilles) to be activated this week. And McDaniel reiterated he’s not focused on the trade deadline.

“I’m focused on team, I’m very happy with our team,” he said. “And if there’s adjustments that do unfold, they will be with the best interest for the Dolphins’ organization. But I’m not even worried about that, at this point.”

Armstead does it again

Armstead, the three-time Pro Bowl selection and nine-year veteran, shut down a young phenom for the second consecutive week as he silenced Detroit’s Aidan Hutchinson, the No. 2 pick of the draft out of Michigan on Sunday.

Hutchinson ended with one tackle, no sacks, no quarterback hits, hurries or pressures. Hutchinson entered the game with 18 tackles and 4.5 sacks.

Armstead, who is battling a toe injury, returned from a one-game absence the previous week against Pittsburgh and held outside linebacker Alex Highsmith, who entered the game with 6.5 sacks, to one tackle and no sacks.

Special teams improved, but had blemish

Special teams concerns still exist but things improved Sunday despite some chicanery by the Lions.

Detroit converted a fake punt into a first down in the second quarter on a direct snap that gained 13 yards on fourth and two from the Lions’ 33-yard line. The possession resulted in a 33-yard field goal and a 27-17 Detroit lead.

However, kicker Jason Sanders was 1 for 1 in field goal attempts and remains perfect on attempts of 50 yards or less. Punter Thomas Morstead only punted once and it put Detroit inside its own 20-yard line.

And the Dolphins’ return teams put in good work.

Overall, it was a good showing for an area that’s had recent issues.