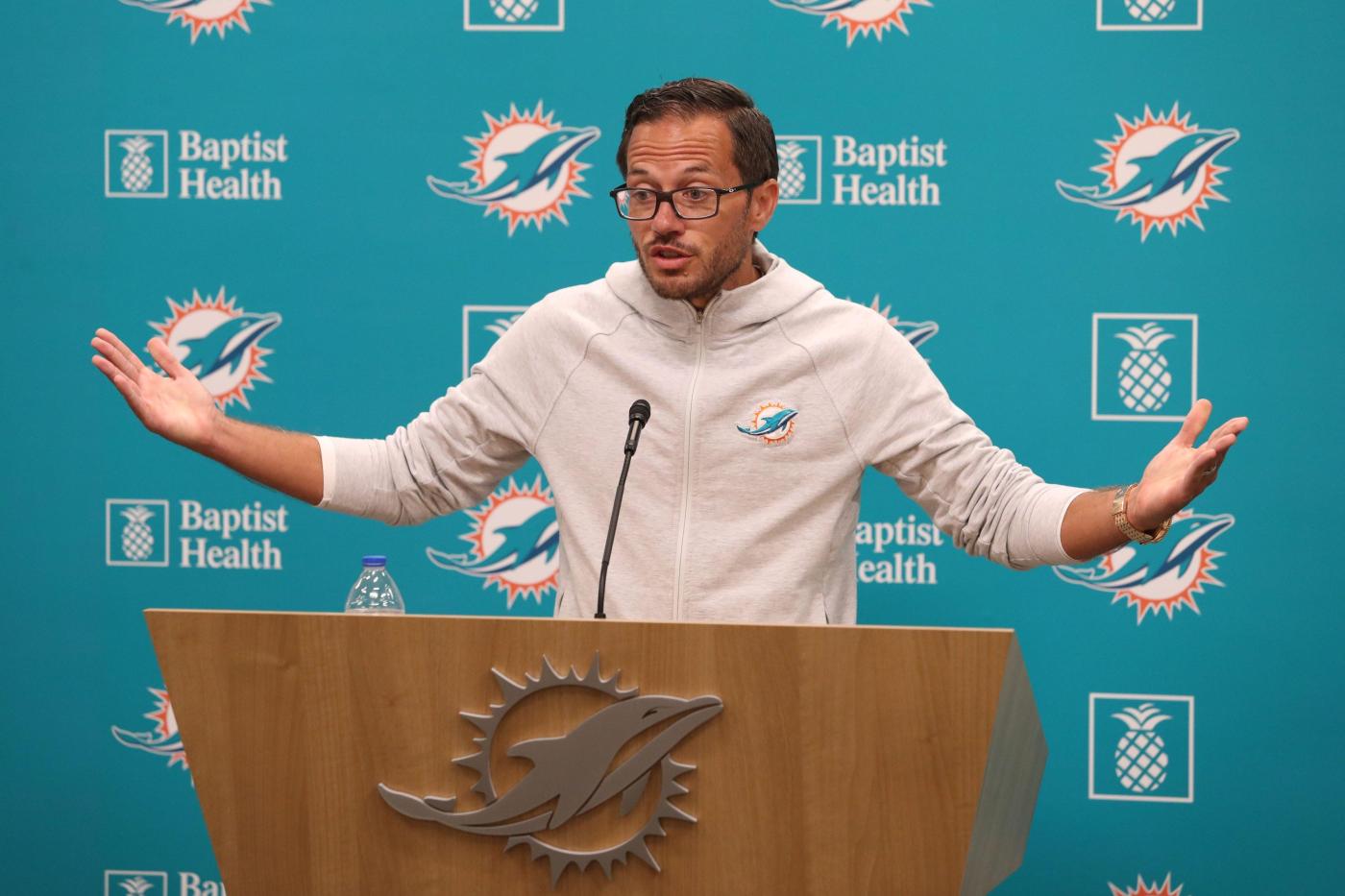 Mike McDaniel will get his first crack at leading the Miami Dolphins in a game setting on Saturday night.

OK, it’s only preseason, but the young, innovative coach will offer an initial glimpse of what it looks like with him on the Dolphins sideline, calling offensive plays and managing his team when the Dolphins play their exhibition opener against the Tampa Bay Buccaneers at 7:30 p.m. on Saturday at Raymond James Stadium.

Sure, something is bound to happen that will get fans overly excited about a roster longshot — or a negative development could create overdramatized concern. But for McDaniel, it’s exactly what preseason should be.

“I look at it to prepare for the regular season,” he said this week as the Dolphins held joint practices with the Buccaneers on Wednesday and Thursday. “It’s an extension of practice to a degree. There are elements of it that feel a little game-like, but really you’re just trying to make sure that you’re your best self before the regular season begins.”

Many of Miami’s top players may sit out. McDaniel has taken a cautious approach with most veterans, although new star receiver Tyreek Hill has been extremely active through training camp practices and the joint sessions with the Buccaneers.

McDaniel also conveyed that Tua Tagovailoa could sit out the exhibition, as the coach has been encouraged by his quarterback’s progress over two-plus weeks of camp. That development came on Thursday as it was later revealed that Buccaneers future Hall of Fame quarterback Tom Brady began a personal leave from the team that will last through Aug. 20.

McDaniel, while now a first-time head coach, will also be his team’s primary offensive play caller for the first time in his career after 49ers coach Kyle Shanahan handled those duties last season in San Francisco with McDaniel as offensive coordinator.

As the head coach, McDaniel will do it from field level. He explained how his experience both on the field and upstairs in a box as an assistant coach has been valuable in preparing him for this moment.

While the Dolphins won’t be too revealing with their play calling in the preseason, Saturday will serve as a trial run for the operation of having coaches and players alike communicate in the game-like atmosphere.

“One of the things that is important for an efficient quality game-day process is that you have other people to lean on,” McDaniel said. “There’s going to be, I think it’s four or five offensive coaches upstairs with each of them having a given expertise that they’re focused on. On the headset, you’re probably going to hear — [offensive coordinator] Frank Smith will probably talk to me the most — but we’ll be resourcing everyone for tangible, equitable information on a down-in, down-out basis.”

Prized free-agent left tackle Terron Armstead is a candidate to sit after being brought along slowly from offseason knee surgery. He had his most strenuous practice workload in Thursday’s drills against Tampa Bay. Center Connor Williams’s snaps are worth keeping an eye on as he’s been inconsistent with it in practice in his move from guard the past four years with the Dallas Cowboys.

While 30-year-old running back Raheem Mostert, also coming off a knee procedure, could similarly see little to no work, Saturday could serve as a preview of the operation of McDaniel’s run game and its wide-zone blocking scheme.

All-Pro cornerback Xavien Howard saw more team practice reps in the joint sessions against the Bucs than he had through two weeks against Dolphins receivers. If he sits, with opposite cornerback Byron Jones already out on the physically-unable-to-perform list, Trill Williams, Noah Igbinoghene and Keion Crossen will be among cornerbacks getting greater opportunities.

Although McDaniel could decide against playing Tagovailoa for even a series or two, he believes he will get preseason action, most likely against the Las Vegas Raiders on Aug. 20.

“There is value in it, but every time that you don’t have a red jersey on, you have the ability to get tackled,” McDaniel said. “That’s risk. There’s a lot of risk in the game of football, but you also have to weigh that upon what’s the best thing for regular season [Week] 1 and it’s a constant battle that you just have to take your time and make the best decision hoping that it’s the right decision.”

Backup quarterback Teddy Bridgewater and rookie seventh-round draft pick Skylar Thompson would get the passing reps, a majority of which would likely go to Thompson.

The preseason is a chance for fringe active roster players on the border of the 53-man cutoff to make their mark. In the past, such undrafted standouts as cornerback Nik Needham, linebacker Sam Eguavoen and offensive lineman Robert Jones have made their mark during this portion of the NFL calendar.

Others can be showcased for other teams if they don’t make the Dolphins’ active roster. Miami could look to display players on the trading block. Wide receiver Preston Williams is a candidate after he has voiced his displeasure with his opportunities in camp. Tight end Adam Shaheen was actually traded on Tuesday, but the deal was rescinded due to his failed physical with the Houston Texans, causing him to return to the Dolphins.