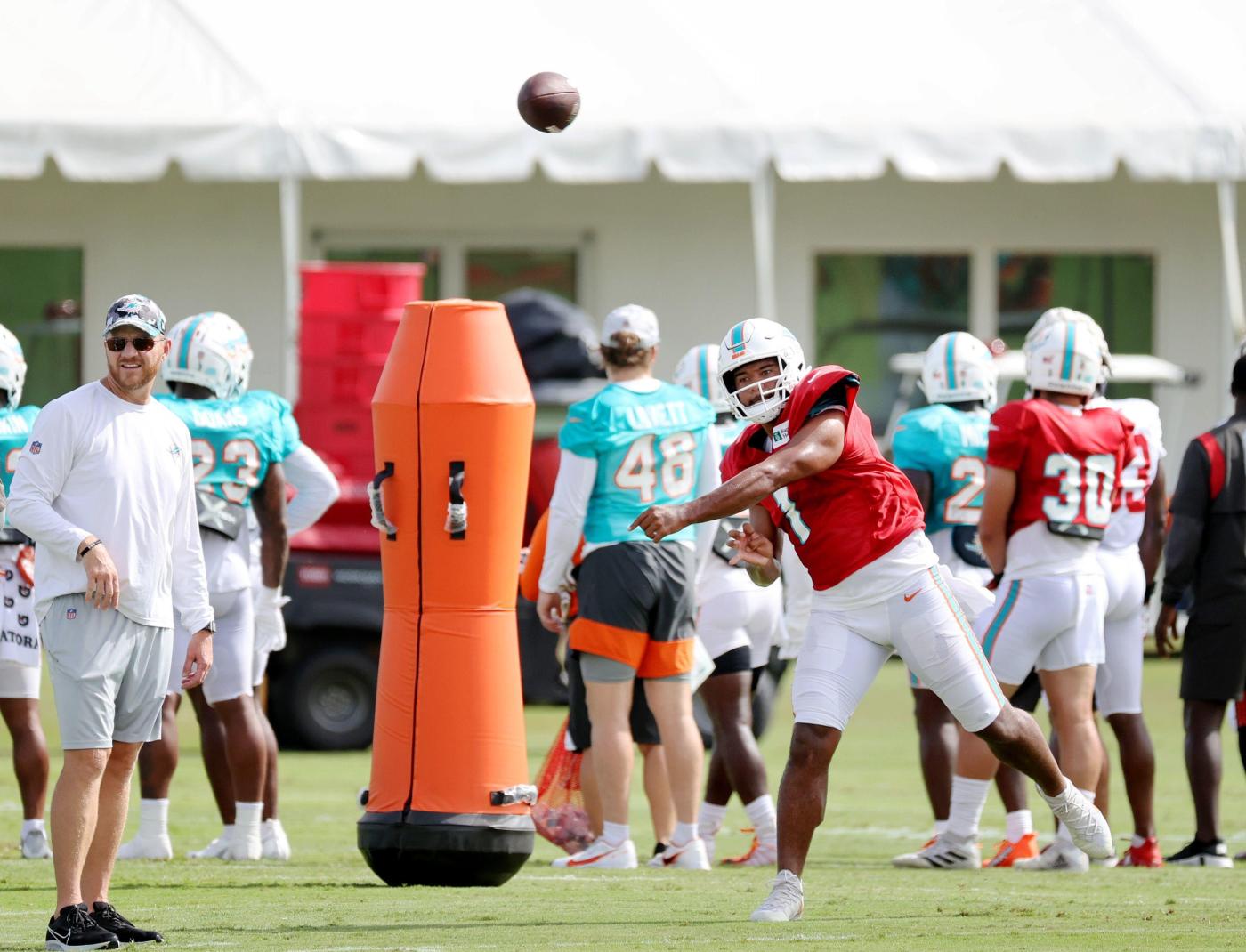 Both starting quarterbacks in the Miami Dolphins’ preseason opener at the Tampa Bay Buccaneers could be kept off the field.

Dolphins coach Mike McDaniel is leaning toward not playing quarterback Tua Tagovailoa on Saturday night at Raymond James Stadium while the Buccaneers’ Tom Brady will be away from his team for more than a week to “deal with some personal things,” as Tampa coach Todd Bowles put it to reporters.

McDaniel appears to feel comfortable with how Tagovailoa has performed in two weeks of intrasquad training camp practices and Wednesday’s joint practice against the Buccaneers entering Thursday’s session.

“Based off of the last couple practices, I’m encouraged about the idea of not playing him, but again, that remains to be seen from what happens [Thursday], McDaniel said. “That has nothing to do with bottom-line results offensively. It’s more how prepared he is at practice. I just want to continue to build on what he’s been building on.”

Following Thursday’s session, which was another effective one for Tagovailoa, wide receiver Tyreek Hill expressed a belief Tagovailoa will be ready to deliver passes to him and his other targets with enough chemistry by the Sept. 11 regular-season opener against the New England Patriots regardless of his preseason snaps.

McDaniel has to weigh the benefits of preseason in-game reps with the potential injury risk.

”There is value in it, but every time you don’t have a red jersey on, you have the ability to get tackled,” he said. “That’s risk. There’s a lot of risk in the game of football, but you also have to weigh that upon what’s the best thing for regular season [Week] 1. It’s a constant battle that you just have to take your time and make the best decision hoping it’s the right decision.”

McDaniel added he would be “surprised” if he went the entire exhibition season without giving Tagovailoa in-game reps but is taking it day by day. McDaniel said he views the preseason as an extension of practice, meant to prepare the team best for the regular season.

Outside of cornerback Byron Jones, who is on the physically-unable-to-perform list, the Dolphins are mostly healthy entering Saturday.

”There’s certain players I feel pretty confident might not play, but I do not get ahead of myself,” McDaniel said. “I talked to the team this morning about it, and as far as they’re concerned, everyone is expected to be prepared to play, but there will certainly be players that don’t, which [Thursday] will have a big impact on

Brady will be away from the Bucs through Tampa Bay’s Aug. 20 preseason game against the Tennessee Titans.

Shaheen back to Dolphins

Tight end Adam Shaheen failed his physical with the Houston Texans, according to a league source on Thursday.

The trade between the Dolphins and Texans, agreed to on Tuesday, is now off and Shaheen will return to the Dolphins. The teams previously agreed on a deal that sent Shaheen and a seventh-round draft pick to Houston for a sixth-round selection.

Shaheen was flagged for a preexisting knee condition, although he hasn’t missed a day of practice in two-plus weeks of training camp.

Shaheen, after missing the Dolphins’ Wednesday and Thursday joint practices with the Buccaneers, returns to a deep tight end room that includes Mike Gesicki, Durham Smythe, Hunter Long, Cethan Carter and undrafted rookie Tanner Conner. On Miami’s initial depth chart release on Monday, Shaheen was listed as No. 5 at the position, ahead of only Conner, who has been a camp standout, consistently making catches in practice reps with non-starters.

In class Tyreek Hill fashion, he had fun with the media pitching the apparel that can be purchased.

“It’s just a bunch of hoochie-daddy shorts,” said Hill, to laughter from reporters as he modeled his post-practice attire. “They’re called ‘Hot Boy Cheetah Summer Shorts,’ you know what I’m saying? So go and get you some.”