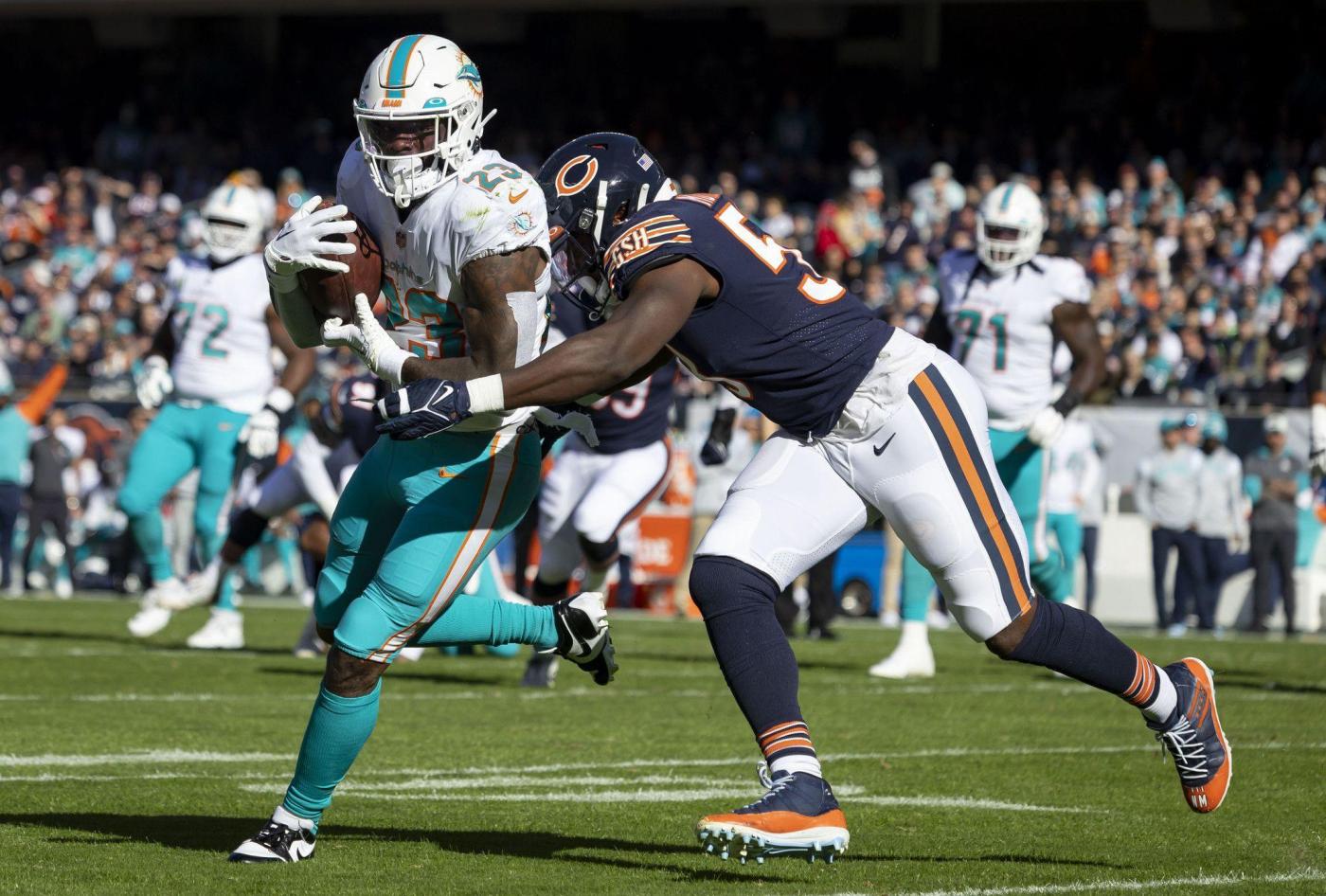 Halfway through the season the AFC East is the best division in football, which means the Dolphins’ season-ending schedule appears much tougher than originally projected. It’s the only division in which every team has a winning record.

Buffalo leads the division at 6-2, followed by the New York Jets and Dolphins at 6-3, and then New England at 5-4.

By the way, every team in the division has a winning road record. The Jets are 4-0, and the three others are each 3-2. In other words, there are no cheap victories in this division.

The NFC East doesn’t have a team with a losing road record as Philadelphia is 4-0, followed by the New York Giants at 3-1, Dallas at 2-1, and Washington at 2-2.

At this point the AFC East has Buffalo, the Jets and Dolphins earning three of the seven AFC playoff berths with New England in the eighth spot behind the Chargers (5-3).

Edge rusher Bradley Chubb, acquired from Denver last week in a high-profile trade, played 56 snaps against Chicago, 54 from scrimmage and two on special teams in his Dolphins debut. Chubb ended with one tackle, but applied good pressure on Bears quarterback Justin Fields.

Defensive back Elijiah Campbell played a season-high 16 snaps (22%) from scrimmage against Chicago as the Dolphins continue to dig into their depth to find answers.

Defensive backs Justin Bethel and Clayton Fejedelem, who have played key roles from scrimmage in the past two games, didn’t get any snaps from scrimmage.

Among other starters in the secondary, cornerback Xavien Howard and safety Jevon Holland played all 74 snaps while cornerback Kader Kohou played 73 snaps.

Wide receiver Tyreek Hill, who had seven receptions for 103 yards and one touchdown against Chicago, now has 76 receptions for 1,104 yards and three touchdowns, eye-popping numbers for a full season and even more impressive considering the season is just nine games deep.

Hill remains in the conversation for the best receiving season in NFL history.

The record for single-season receptions is 149 by Michael Thomas (New Orleans) in 2019.

The record for single-season receiving yards is 1,964 by Calvin Johnson (Detroit) in 2012.

It’s conceviable Hill could end with 150 receptions and 2,000 yards receiving.

Quarterback Tua Tagovailoa’s career passer rating is now 95.3, which is the best in Dolphins history, surpassing Chad Pennington (2008-10, who posted a 94.5.

Tagovailoa has had his two best career passer ratings the last two weeks with a career-best 138.7 at Detroit and a 135.7 at Chicago.