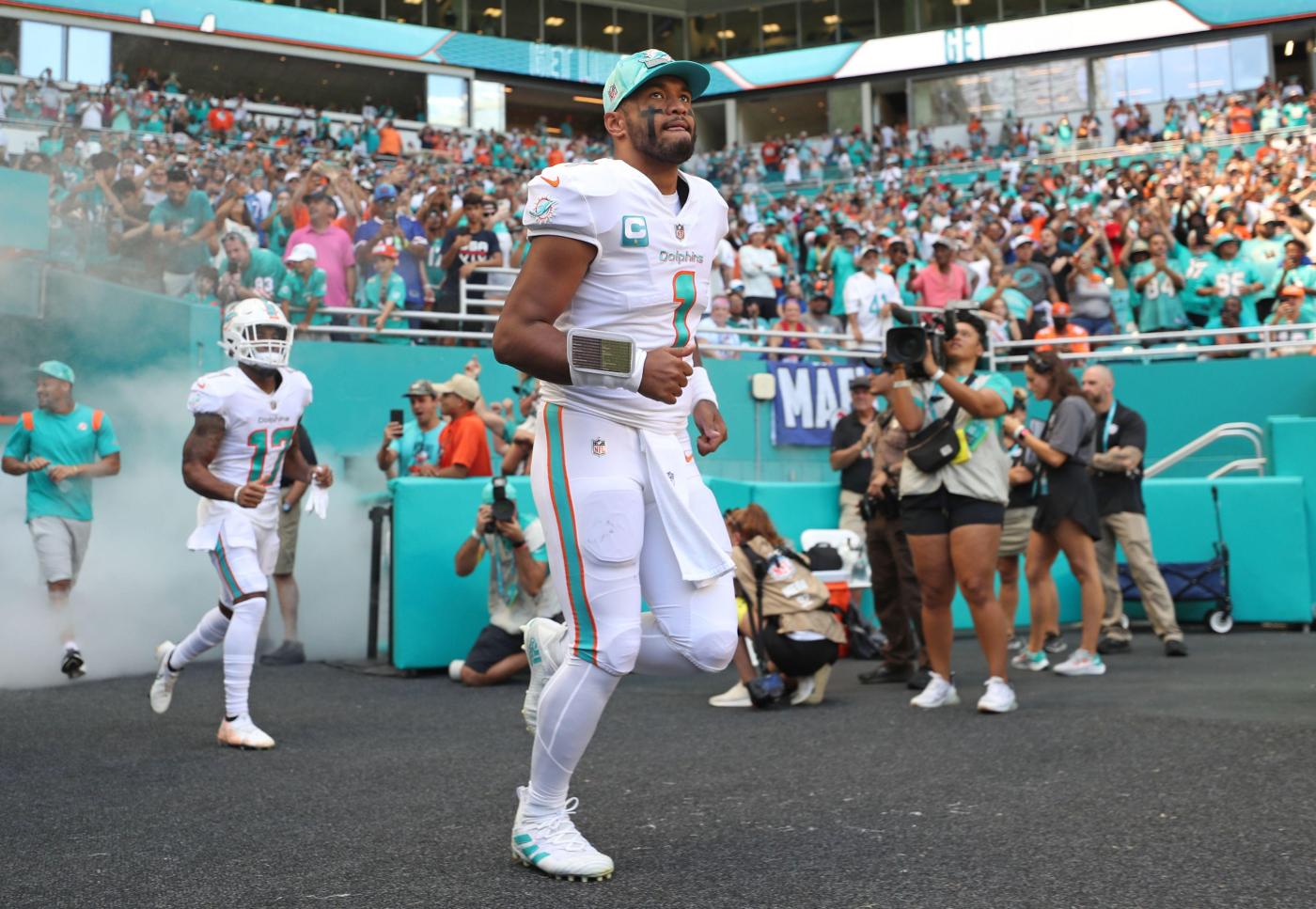 It was leaning in this direction as the short week progressed for the Miami Dolphins. Now, it indeed appears to be happening, barring a setback.

Tagovailoa, officially listed as questionable for Miami entering Thursday for the night game in Cincinnati, is expected to be ready to go and play against the Bengals, a league source confirmed to the South Florida Sun Sentinel. Wide receiver Jaylen Waddle and left tackle Terron Armstead are also expected to play.

Tagovailoa was recovering from back and ankle injuries in the three days between Sunday’s 21-19 win over the Buffalo Bills and Thursday as Dolphins players rested on Monday and held walkthroughs on Tuesday in Miami and Wednesday in Cincinnati.

A head injury was originally thought to be the issue on Sunday for Tagovailoa after he was knocked back on a late hit by Bills linebacker Matt Milano in the second quarter. Banging the back of his head on the turf in a whiplash effect, Tagovailoa stumbled after getting up.

He was escorted to the locker room after getting checked on the field, and Tagovailoa returned for the second half after clearing concussion protocol. Finishing 13 of 18 for 186 yards and a touchdown in the win, both Tagovailoa and coach Mike McDaniel said it was not a head injury, as the initially team announced during the game, but actually a back injury that originated on an earlier quarterback sneak and was exacerbated by Milano’s push that landed Tagovailoa on his back. The ankle aspect of Tagovailoa’s injury concern was learned on Monday, but Tagovailoa said Tuesday the back remained the greater issue.

He said what he was feeling in his back was affecting every twist and turn he needs to make to function as a quarterback, whether it’s handoffs, pitches or forward passes.

Nonetheless, Tagovailoa responded, “that’s the plan,” when asked on Tuesday if he expects to play. McDaniel expressed similar optimism from conversations he had with the quarterback.

Tagovailoa’s playing he will get to face Bengals signal-caller Joe Burrow. The two third-year quarterbacks would play each other for the first time in the NFL and since their epic college showdown between Alabama and LSU in 2019. Burrow was out injured when the Bengals and Dolphins met in their rookie seasons in 2020.

Armstead is set to start again while nursing a toe injury sustained in the opener against the New England Patriots. Waddle popped up on the injury report on the short week, dealing with a groin injury.

Paramount among Miami’s other players entering the prime-time game with questionable designations was cornerback Xavien Howard‘s status due to groin and glute ailments. The Dolphins also had safety Brandon Jones (chest) and defensive tackle Raekwon Davis (knee) as questionable for Thursday. Outside linebacker Andrew Van Ginkel (illness) was added to the injury report Thursday morning.

Dolphins quarterback Skylar Thompson, the rookie seventh-round pick from Kansas State, is active for at Cincinnati, the first time he’s been active all season.

Thompson is presumably active because Tagovailoa was on the injury report this week for back and ankle injuries. Backup quarterback Teddy Bridgewater played briefly in Tagovailoa’s place vs. the Bills but it was unclear who would have served as Bridgewater’s backup if he needed t play Thursday.

Carter has been inactive for three games, mostly due to being in concussion protocol after the opener against New England.

This is the third game Gaskin has been inactive. Gaskin led the team in rushing last season with 612 yards.

The Dolphins used their allotment of three practice-squad elevations on Cracraft in the first three weeks of the regular season. That’s the maximum allowed by 2022 NFL rules before a team has to sign a player to the active roster should it want to bring him up for a fourth game.

If the Dolphins then want to send Cracraft back to the practice squad later on, they would have to release him to then sign him back. Between the two transactions, however, he would be eligible to be claimed off waivers by other NFL teams.

Miami didn’t have to make a corresponding move after signing Cracraft since it had an open spot on the active roster, starting the day at 52 instead of the maximum 53. The Dolphins, though, will need a spot when cornerback Byron Jones returns off the physically-unable-to-perform list and offensive lineman Austin Jackson comes back from injured reserve.

Ingram is the only player in the league with two sacks and a defensive touchdown. He won the award September 2017 when he was with the Chargers. Ingram is the first Dolphins player to win the award since linebacker Jerome Baker in December 2021. Ingram had the tackle to keep Buffalo wide receiver inbounds on the game’s final play in last week’s 21-19 victory.

Thursday games are a tough turnaround. Preparation is vital, and for most players it began Sunday night after the Bills game.

“I got in the ice tub and hot tub immediately,” safety Jevon Holland said. “I went straight to it.”

Running back Raheem Mostert is among those who started preparations Sunday night.

“We’ve got to take care of our bodies,” he said. “They opened up the facility right after the game so we can get in here and do what we needed to do in order to get prepared for Thursday.”

“That kind of gives us that whole day to do a little bit more recovery,” he said. “The mental side of the game, it kind of grows from there. But it’s for sure a quick turnaround. But these Thursday games, from my experience, it’s been two years, are really fun.”

The Dolphins, who entered Thursday’s game as one of two undefeated teams in the NFL along with Philadelphia (3-0) have risen in various power ratings and they’ve become a hot topic nationally. Coach Mike McDaniel has instructed his players to be wary of the chatter and not to get caught up in narratives, good or bad.

“We’re trying to win football games, and more importantly, in the process we’re trying to get better every week so we’re playing our best football at the end of the season because that’s where you’re truly judged,” he said.

“So none of the power rankings or the hype factor in on that. To me, I try to cater to any of the guys that are in love with attention and let them know that, ‘Hey, if you still want this attention, keep winning.’ “

— NFL security is looking into the Dolphins’ Wednesday walkthrough at University of Cincinnati getting filmed by an outside observer, according to a league source. The Dolphins moved their Wednesday session to Cincinnati, adjusting to an earlier flight time due to Hurricane Ian, and held practice at the Bearcats’ football field, Nippert Stadium. Several plays from the walkthrough were filmed from high up in the stadium and posted on social media on Wednesday.