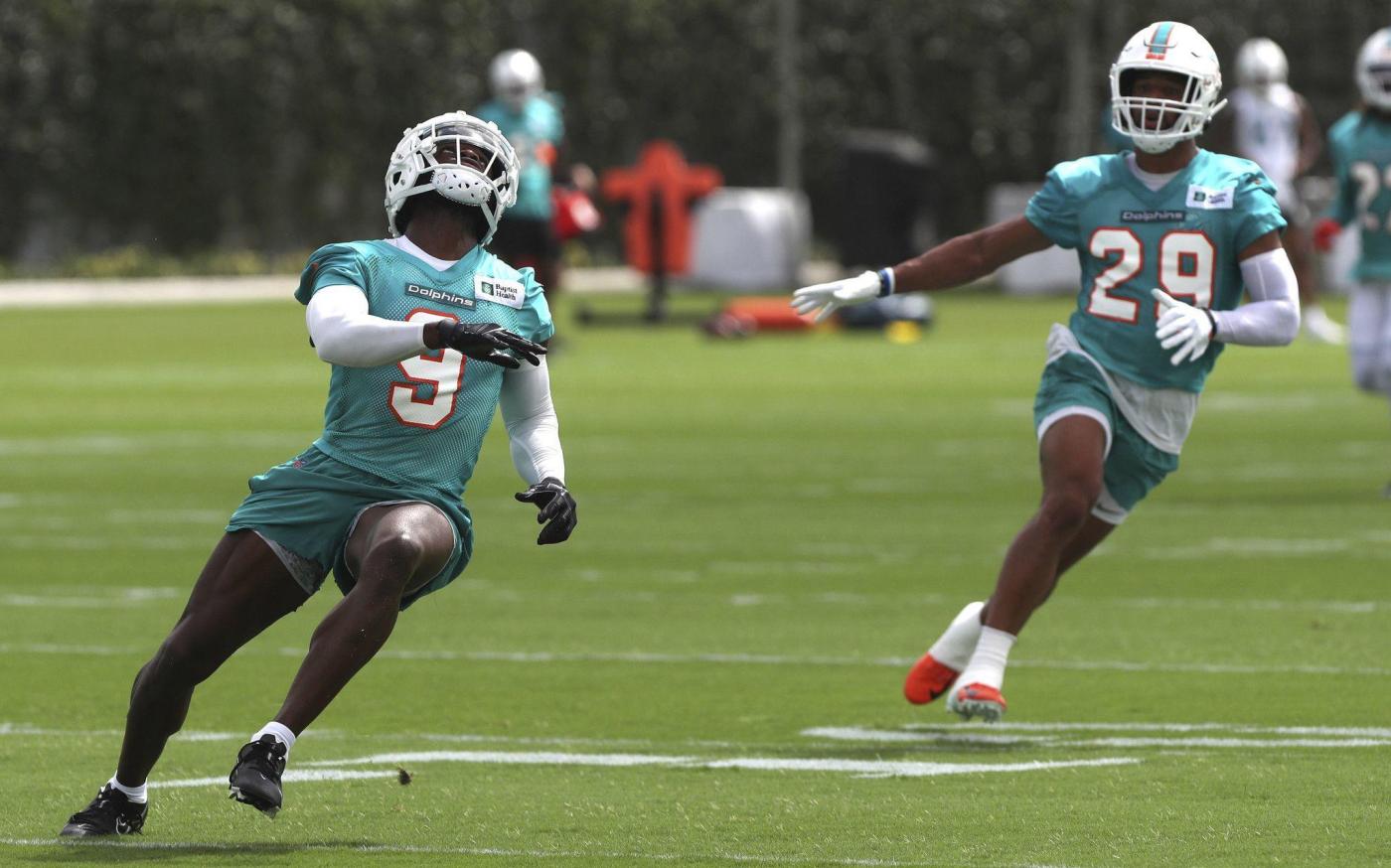 Tom Brady has been batting his eyes at the Miami Dolphins, whether it is for a role in the team’s ownership group, front office, or as an aged but-still-productive starting quarterback.

Jimmy Garoppolo is on the trade market, and the San Francisco 49ers might potentially giftwrap the 30-year-old, and a revised contract, to an interested team for a mid-round NFL draft pick.

But it’s doubtful either veteran quarterback ends up in Miami, behind center, this season.

Anything is game if Tagovailoa, the fifth pick in the 2020 draft, doesn’t prove he’s a centerpiece talent worth building around in his third NFL season.

“I know my capabilities. So when I’m not playing up to it, or living up to it, then it gets frustrating,” Tagovailoa said Wednesday when discussing how critical he is on himself. “Overall, [my play] either benefits the team, or it doesn’t.

“I never put pressure on myself, but it comes with the position,” said Tagovailoa, who owns a 13-8 record as an NFL starter, and has a cumulative passer rating of 88.8 after throwing 27 touchdowns and 15 interceptions in the 23 games he’s played. “Pressure is always there playing this position.”

Progress must also be present to maintain his status as this franchise’s future, and that’s reasonable considering we need to shed all the excuses that are regularly made for Tagovailoa.

He finally has a coach who doesn’t despise him (like ex-Dolphins coach Brian Flores did), and isn’t trying to replace him with Deshaun Watson.

The Dolphins should possess a respectable offensive line, one that isn’t a turnstile like the unit he played behind the past two seasons because of the addition of Terron Armstead and Connor Williams.

The hope is that the offensive line, the running backs added in free agency, and the shift to the outside-zone running scheme new head coach Mike McDaniel has grown up in, produces a reliable rushing attack.

The Dolphins’ playmakers have been drastically upgraded because of the re-signing of tight end Mike Gesicki, the trade that brought in Pro Bowler Tyreek Hill, and the signing of Cedrick Wilson.

Outside of injuries, and the time it will take (maybe half a season) for everyone to get comfortable in this new offense, there is no excuse for the Dolphins to not deliver a top-15 offense in 2022.

“With Tua being our leader and being our nucleus, we can all help him, he can help us. So there’s no added pressure on Tua,” Armstead said. “The protection has to be better for him and it will. He has more weapons now than he ever has. We’re looking to improve. It’s just Day 1. We’ve got a long way to go to become what we see the potential to be, and it takes everybody. It’s not just one person.”

But that person better be the catalyst because that’s the sign of a good quarterback, an elite quarterback worth investing $200 million into, which is today’ going rate on new contracts for franchise QBs.

If Tagovailoa’s not close to that type of talent, reaching the Garoppolo level of quarterbacking this season, the Dolphins might need to pivot and move onto the next option because too many seasons have been wasted, laboring to find a quarterback who can carry this franchise to postseason success.

And the last thing this franchise should want to do is repeat the Ryan Tannehill mistake, investing time and money into a quarterback who can’t take this team where it desires to be.

That’s why the bar needs to be set higher than it has been in past decades.

“He has such a natural football presence on the football field that who cares if there’s one read this way or that way,” McDaniel continued. “Again, like every quarterback, it’s not if but when [things go wrong]. So those short-term memories, that’s what I think you can really work on in the training camp right now, and moving forward as the leader of our team.”