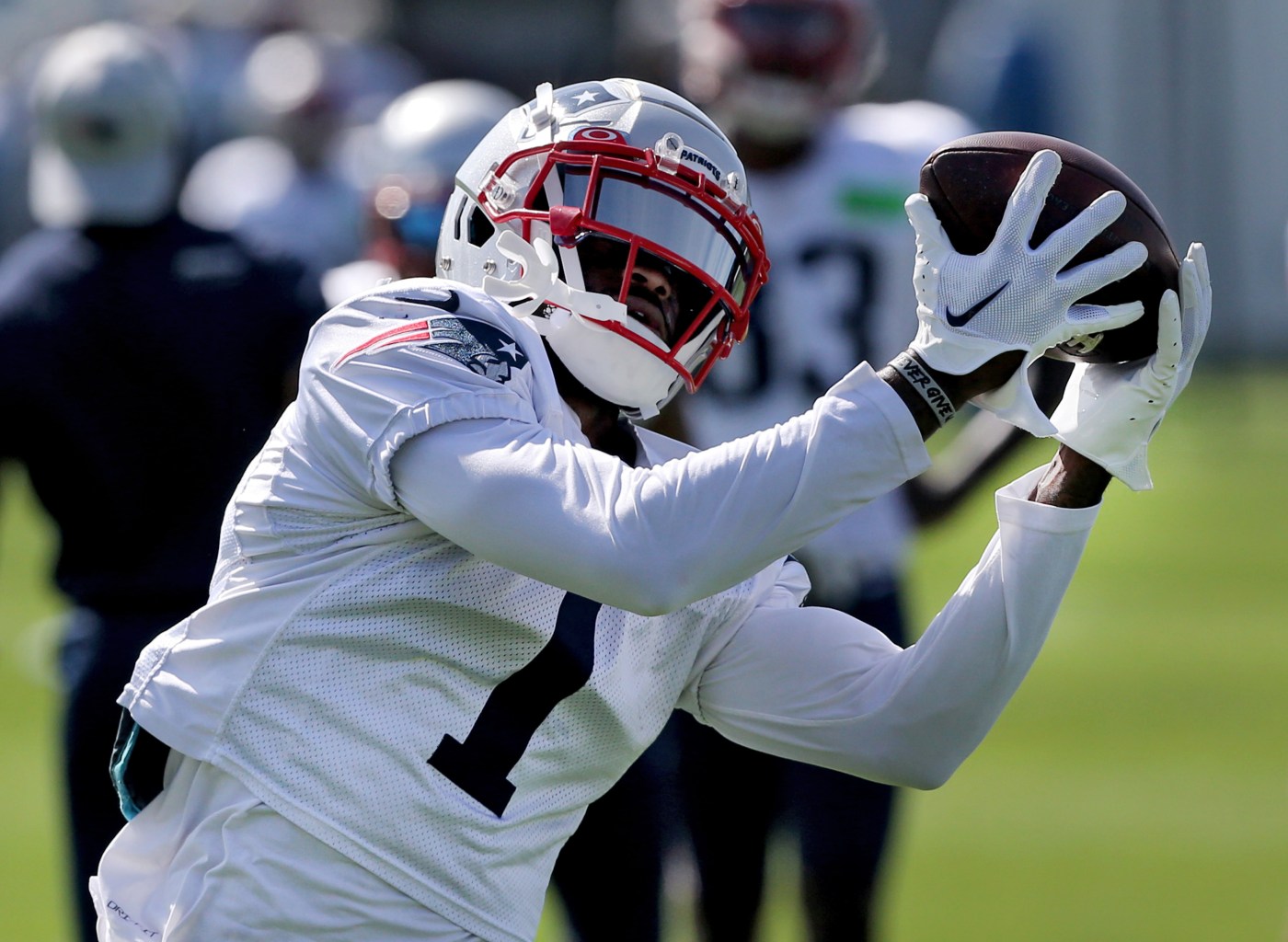 FOXBORO –  Put DeVante Parker in a contested catch situation with a 50-50 chance of coming down with the ball against an opposing defender, and he’ll bet on himself every time.

“It’s more like 80-20,” Parker said with a smile, when asked about his view on jump balls.

Whether it’s one defender or two, between Parker’s athleticism and burning desire to win, he could be an important weapon for Mac Jones and the Patriots offense this season and beyond.

Jones must like Parker in those jump ball situations because he’s been floating passes toward the 6-foot-3, 219-pound receiver throughout training camp, feeling out what his new wideout can do. And against a strong Panthers secondary during joint practices Tuesday, Jones wasn’t disappointed.

Parker, who had six catches on eight targets during competitive drills, came out on top almost every time.

He made several grabs near the sideline against tight coverage that had the crowd outside Gillette Stadium screaming with excitement.

“That’s something that I’ve always been having (success with) since I was in high school, and just brought it to the NFL,” Parker said of his contested-catch ability. “If the ball is in the area, it’s mine.”

The statistics support that claim.

Since 2019, Parker has led the NFL with 57 contested catches, per Pro Football Focus. On Tuesday, it was obvious that was no fluke.

While it seems like a different Patriots receiver earns headliner status after each practice, this was clearly Parker’s day.

Jones went to him down the field on several occasions. Parker’s best came during an 11-on-11 session, as he elevated over Panther defenders Donte Jackson and Xavier Woods to pull in a jump ball down the sideline for a 30-yard completion.

That kind of ability gives the Patriots something they didn’t have in the receiver room last year. N’Keal Harry was supposed to be that guy, but never materialized as a threat and proved to be a first-round bust.

Now, Parker doesn’t exactly separate from defenders like Tyquan Thornton does with his breakaway speed But he’ll go up and get the ball in a crowd.

There’s certainly value in that, which is why the Patriots made a rare trade with a division opponent.

The Patriots wound up getting him for next to nothing (swapping a 2023 third-round pick for Parker and a fifth-rounder) for a number of reasons. First was Parker’s inability to stay healthy during his seven seasons in Miami.

Another reason was having the team bring in Mike McDaniel, a new offensive-minded head coach, who was given a couple of shiny new toys. Tyreek Hill arrived in a monster trade from Kansas City, while former Cowboys receiver Cedrick Wilson was signed in free agency.

That made Parker expendable.

The veteran wideout, however, would love nothing better than to prove his former team wrong. Already, he thinks he’s taken it up a notch since arriving in New England.

“I’m a little bit more quick than I was,” he said. “I’ve spent a lot of time stretching more than I have in the past . . . just trying to stay loose and keep my body right.”

While the 29-year-old isn’t a game-breaking type receiver in the mold of Hill, Cincinnati’s Ja’Marr Chase, or Buffalo’s Stephon Diggs, he perfectly complements the group they have.

And all of those different skill sets were on display against the Panthers.

Jakobi Meyers (5 catches) continues to get open from the slot, and provide a safety net for Jones. Agholor, who was the star in Monday’s practice with a pair of one-handed grabs, showed off his shiftiness in getting free from defenders Tuesday. He made a pair of catches, and also drew a penalty.

Kendrick Bourne had two catches before being tossed out during the first fracas that broke out with the Panthers, while rookie Thornton (4 catches, 8 targets) continues to move the needle.

During 1-on-1s, he turned Panthers defender and former Baylor teammate Kalon Barnes into a pretzel with a double-move before making a diving catch in the end zone. Once again, Thornton’s final burst of acceleration was no match for the defender, as Jones led him with a perfectly thrown ball.

Patriots’ Deatrich Wise on defense against Panthers: ‘We were dominating the whole time’

The way it looked Tuesday, when Jones got protection, his receivers made plays all over the field. At least, that’s how it played out during the first of two joint practices with the Panthers.

Better still, Parker said he can already feel the Patriots receivers playing faster in the new offense, which has come under fire due to the team being slow to adapt.

Damien Harris got all tongue-tied Tuesday when asked if he was now seeing a little more daylight than past practices. His hesitation, and avoidance of answering the questions, suggested there were still issues.

He’s right. It wasn’t all perfect against the Panthers. The running room was better, but still not great, and there were also some ball security issues.

But there was some progress, and a light at the end of the tunnel, especially when it came to the receivers. For one day at least, Parker was a stud. And the rest of the receiver cast wasn’t too bad, either.