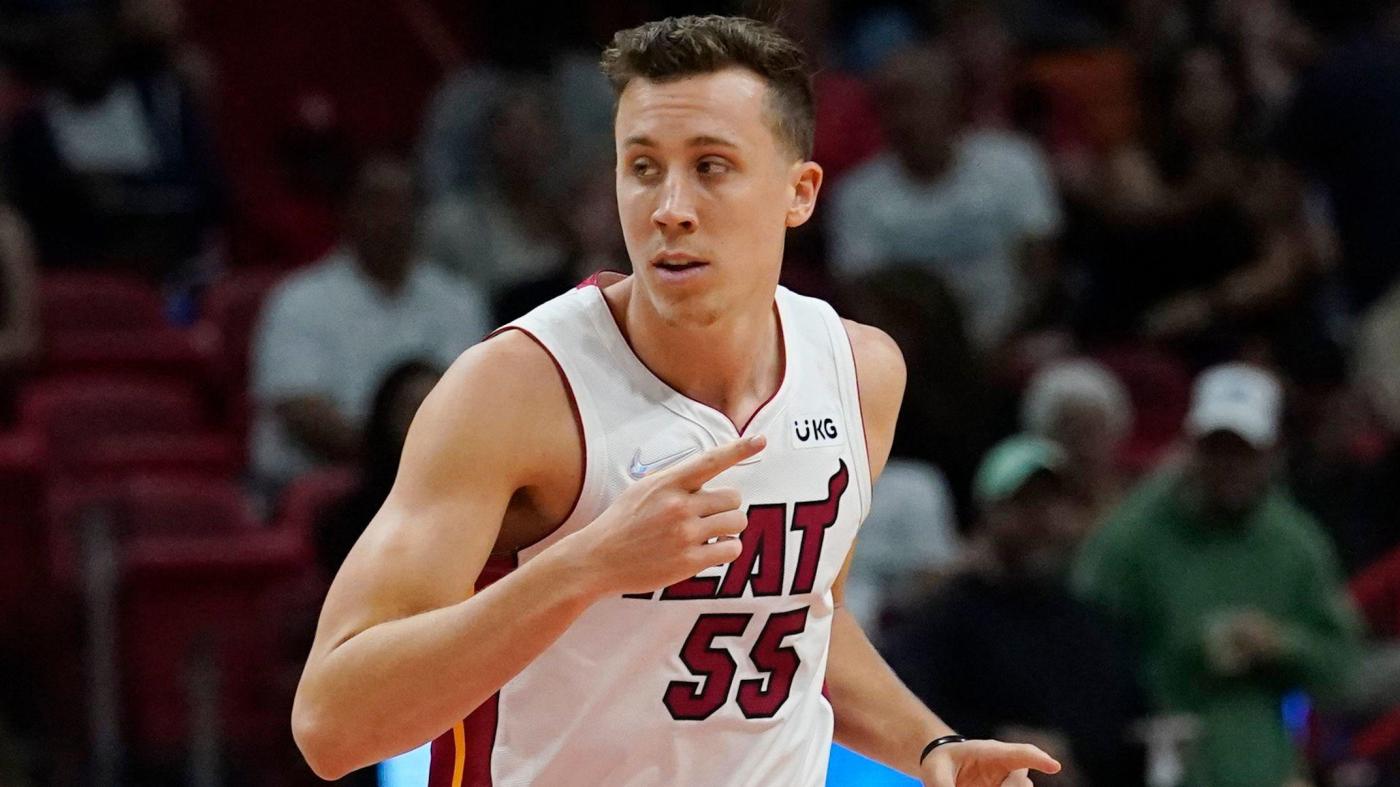 The climb from four games below .500 by the Miami Heat has come with the perspective that work remains.

It is with a similar approach that guard Duncan Robinson finds himself in the midst of his own ascent.

Having gone since Nov. 14 without more than one 3-pointer in a game, Robinson has now converted nine over the past three, as the Heat head into Tuesday night’s matchup against the Chicago Bulls at the start of a four-game homestand.

“Usually I’m the beneficiary of some unselfish play, some great screens and all that good stuff,” Robinson said. “So just trying to let it fly, especially when it’s going in.”

Robinson’s revival has come amid the Heat’s revival, with a four-game winning streak going onto Tuesday night.

Asked in his televised Bally Sports Sun interview in the wake of Saturday’s victory over the San Antonio Spurs in Mexico City about pushing back from adversity, Robinson smiled.

“Yeah, I mean ups and downs have been my whole career, so it’s not uncharted territory,” he said, having risen to the NBA from a collegiate career that began at Div. III Williams College. “I just continue to roll with the punches, and keep showing up. I believe showing up is a super power.

“So continue to do it, be consistent with it and over time, I’ll have something to show for it.”

With the Bulls having lost seven of their past nine, former Heat guard Goran Dragic found himself channeling the Heat mantra of sacrifice in the wake of Sunday’s distressing 150-126 road loss to the Minnesota Timberwolves.

“Somebody told me — and he was right — it’s easy to talk about sacrifice. But somebody else’s sacrifice is easier to talk about,” Dragic said, with Heat coach Erik Spoestra often making that a talking point during Dragic’s Heat tenure. “But when it comes to you, that you have to sacrifice for the team, then it’s a different story. You have to accept it. But it’s tough.

Dealt by the Heat in the 2021 offseason to the Toronto Raptors in the trade for Kyle Lowry, Dragic worked out a buyout to finish last season with the Brooklyn Nets. Now on a one-year deal with the Bulls, it is possible another buyout is in the offing.

“It’s details,” Dragic said of what the Bulls have been lacking. “Small details. And in this league everybody can beat you, and we can see that.”

The Heat’s injury report is more upbeat (relatively ) than in recent weeks.

But after sitting out Saturday, Lowry (knee) and Caleb Martin (ankle) are questionable, with Udonis Haslem (Achilles) also questionable.

Team UD included Haslem, Spoelstra, De La Grana, Foran, Glascock and Scott Gurka, the team’s director of basketball administration. With an initial goal of 2,000 pushups in an hour that group wound up completing 4,500.

In the wake of 35- and 41-point performances, Heat guard Tyler Herro was among the nominees for NBA Eastern Conference Player of the Week that went to Cleveland Cavaliers guard Donovan Mitchell.

Other East nominees were Paolo Banchero from the Orlando Magic, Jalen Brunson and Julius Randle from the New York Knicks and Kevin Durant and Kyrie Irving from the Brooklyn Nets.