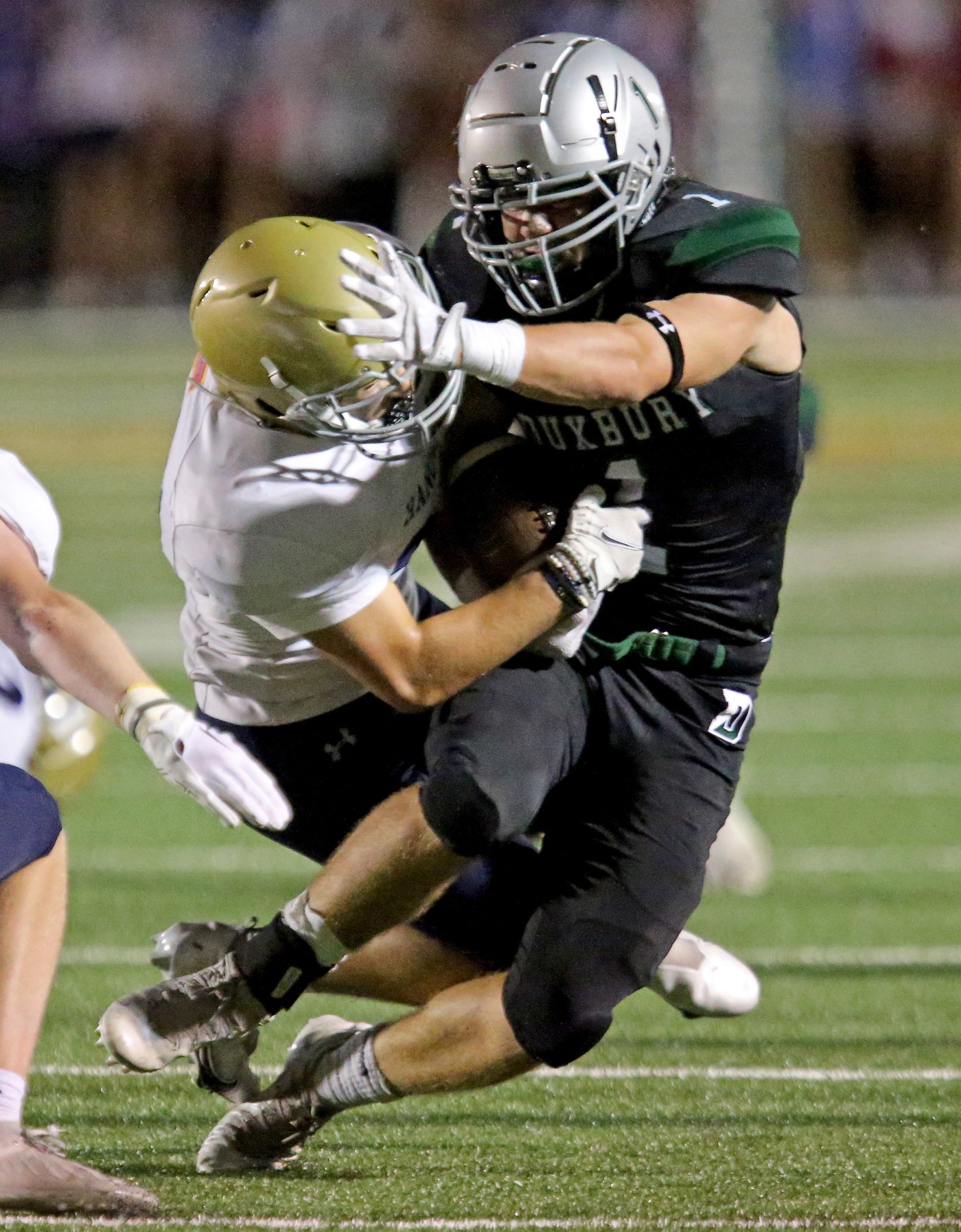 DUXBURY — The Duxbury football team knows what it has in quarterback Matt Festa, one of the best players in the state.

Coach Matt Landolfi and his players are aware that if they ask Festa to beat teams with his arm, then the senior can do that.

There were times when Festa made big throws in Thursday night’s season opener against Hanover. But, ultimately, the Dragons earned the 21-7 win with its running game and defense.

And whatever way it was accomplished, 1-0 is 1-0, and Duxbury will take that.

“It’s definitely an old-school win,” Landolfi said. “Last year we were mostly all pass. There was definitely an emphasis to run it more this year. Our offensive line is really athletic. They’re smart kids. They really put the effort in today. Some penalties kind of hurt our drives, but they came through in the end, which was fantastic.”

Duxbury led 14-7 at halftime, and that’s how it stayed going into the fourth quarter. The Dragons then took over at their own 21 with 6:27 to play. They followed with a 10-play drive, which included a 34-yard Barlow gain, and a 7-yard Barlow rush on fourth-and-2 from near midfield.

Barlow finished the drive with a 2-yard touchdown with 2:19 to play that essentially iced it.

“We’ve got to take the pressure off Matt,” Barlow said. “He’s a great player, but he can only do so much. We had to help him out.”

It appeared that Duxbury was going to run away with this early on. Duxbury scored on its first two possessions of the first quarter: a 4-yard Festa touchdown run; and, a 9-yard scoring pass from Festa to Chris Walsh.

But Hanover battled back. Junior quarterback Ben Scalzi, who finished with 173 yards passing, rolled to his left and hit Mehki Bryan with a 19-yard touchdown in the second quarter.

That’s how it stayed until the fourth quarter, as the Duxbury defense stuffed a long Hanover drive inside the Dragons’ 10-yard line in the third.

The game was the first between Landolfi and his brother, Chris, who is the coach of Hanover.

“It’s nerve-wracking,” Matt Landolfi said. “I wanted to beat him. He wanted to beat me. We’ll probably fight during Thanksgiving. It’ll be a fistfight, probably.”