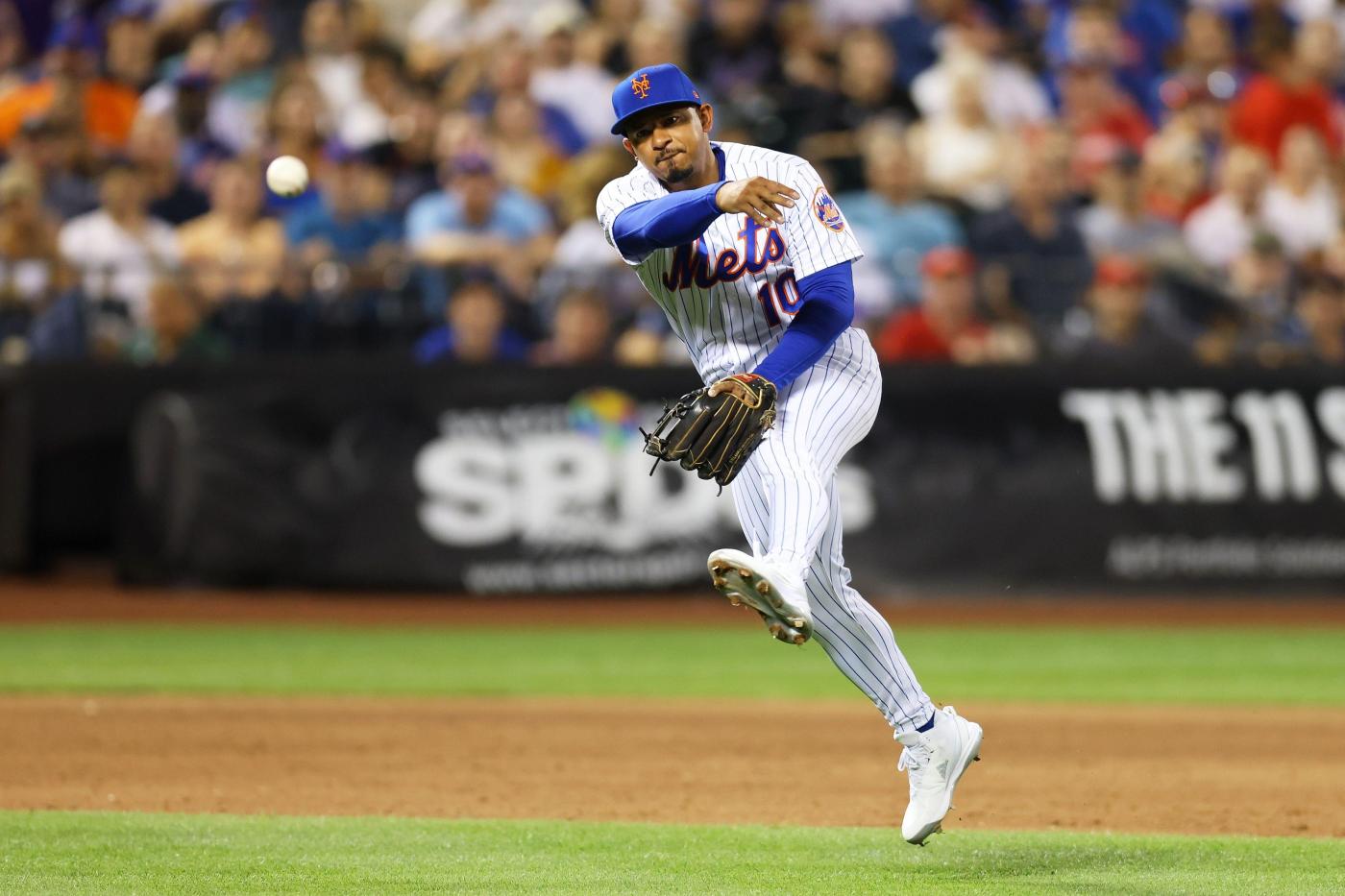 After being abruptly pulled from Friday night’s game with tightness in his left side, Eduardo Escobar finally explained what happened.

“I really felt it when I was swinging,” he said on Sunday afternoon. “After those couple ground balls at third I felt kind of a pull. I went into the cage and took a couple swings to see if maybe it would loosen up a little bit. But, it started to feel worse at that point. In order to not miss the rest of the year and make it a longer stint where I was away, I told the trainers. They did an MRI, and we’ve been treating it.”

The MRI came back clean, which leads Escobar to believe that a stint on the injured list will not be necessary. On Sunday, he was held out of the lineup for the second straight day, though. Luis Guillorme got his 19th start of the season at third base, but the Mets ran into the exact situation they were hoping to avoid. Before the game, Escobar said if there was an emergency, he could play. When Guillorme’s left groin started acting up, the Mets had to break that emergency glass.

Escobar came in for Guillorme and played five innings at third base. He told reporters during pregame that running and fielding wouldn’t be a problem, but hitting right-handed might be. One of the two switch-hitter’s at bats on Sunday came from the right side, forcing him to test the oblique, and he fouled out against Phillies’ lefty Brad Hand.

Knowing how delicate the oblique is, and where the team is both in their schedule and the standings, the Mets were hoping to slow-play Escobar’s return to avoid causing any further issues.

“I was scared because an oblique is not like a hamstring, where it’s a certain amount of time that you’ll be out,” Escobar said. “With an oblique it may be three months. I’ve heard stories from other players who have gone through it. It can be a while to recover. That’s not what I wanted. When you mess up your oblique, it’s a really bad injury.”

The third baseman insists that he’s felt better and better every day. But if it pains him to bat from the right side, that diminishes the best part of his game. The right side has been Escobar’s preferred one for his entire career. The Mets are also not scheduled to face a left-handed starter in any of their four upcoming games in Atlanta, meaning Escobar will be able to swing pain-free but also be exclusively on his weaker side. When a lefty’s on the mound and he’s in the right-handed batter’s box, Escobar has a .275/.319/.461 slash line (.780 OPS). When things are reversed, he’s at .244/.301/.419 (.720 OPS). While the injury may sap him of his most valuable skill, Escobar is just glad that it’s not worse.

“I was talking to Guillorme who’s also had an injury like that, and it makes it difficult to do a lot of things,” Escobar retold. “Sometimes you can’t go to the bathroom, sometimes you can’t even go to sleep because you feel it on that side.”

Escobar also offered a take on Mark Canha, who had a brief dalliance at third base on Friday night because of the injury madness.

“At first I was surprised that he was out there,” Escobar said. “But he really made me proud. At the same time, we’re professionals. People think it’s funny that he was out there, but it’s not really a joke. We’re the type of team that will fill in for anybody if we need to. All year, we’ve really backed each other up and supported each other. That’s what he did there.”

Middle relief has become a sort of topic du jour around Citi Field.

There are no words to adequately describe how good Edwin Diaz has been in the ninth inning. Adam Ottavino has proven himself to be a consummate eighth-inning setup man. Whoever gets those outs before Ottavino and Diaz, after the starter, is typically the most important decision Buck Showalter makes on a given night. Before Sunday’s game, he was asked about that bridge to the back end of the bullpen.

“Bridge, I guess that’s appropriate, talking about bridges here,” Showalter quipped. “I’ve been able to pass the load around, use different guys on given nights. That’s unusual. But right now, we’ve got multiple people that can defend themselves against left and right.”

Since July 1, Williams has been sensational as the long relief man. He’s now pitched 13 innings in that span without giving up an earned run. Givens had a really bad start to his Met career, giving up five earned runs in his first game, but he’s settled down in his five outings since and racked up two K’s on Sunday. Rodriguez, the southpaw who’s being used less and less often and had to get bailed out by Ottavino after being unable to finish his inning on Sunday, has a 5.59 ERA in 9.2 frames since the start of July. Trevor May also looks promising, striking out seven batters in his four innings since coming off the IL.