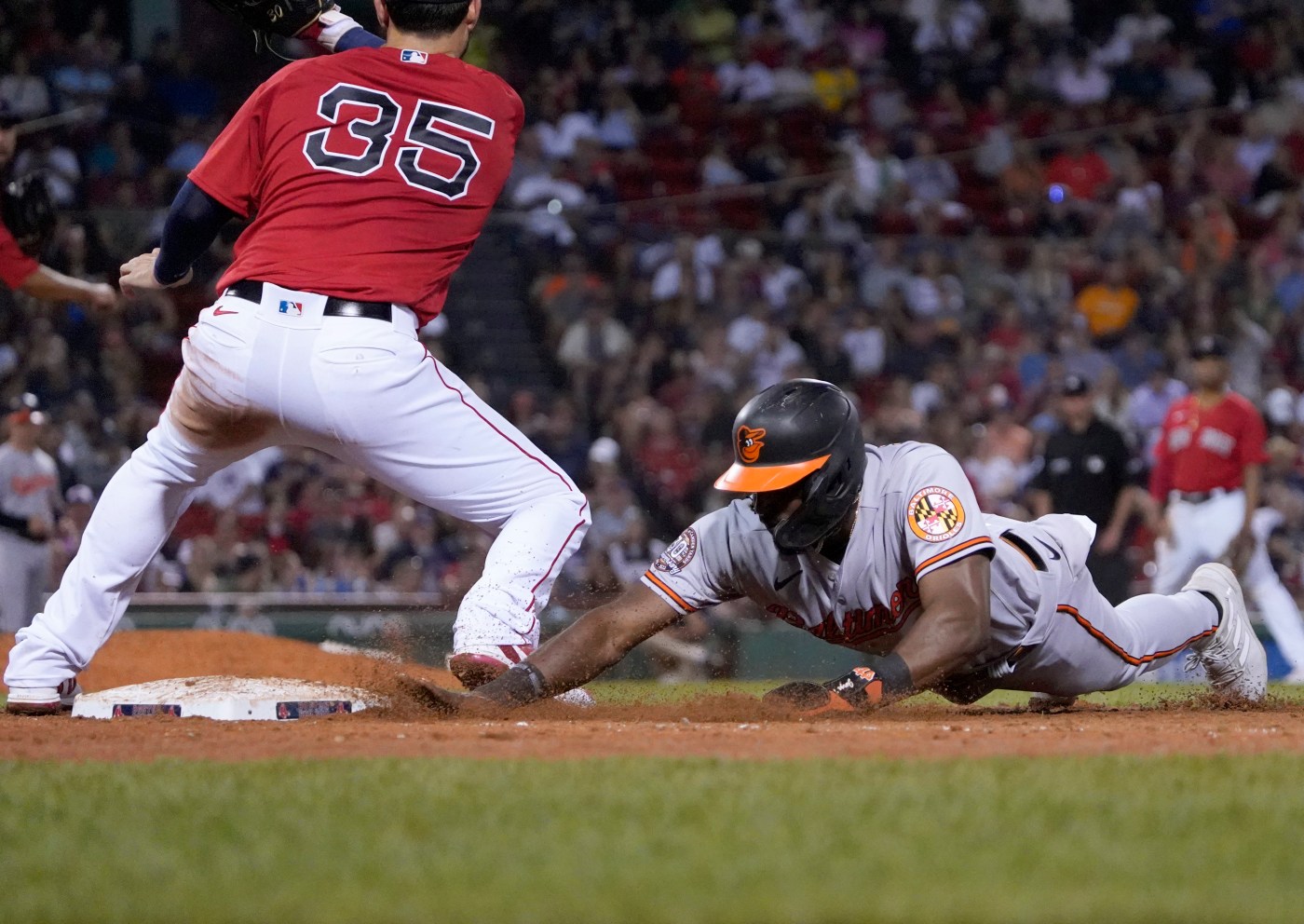 Approaching his 33rd birthday this fall, Eric Hosmer hasn’t been able to hit a fastball the way he used to.

But when Orioles lefty Nick Vespi tried throwing a 1-2 slider up and away with the game tied in the sixth inning on Thursday night, Hosmer handled the breaking ball just fine.

The Red Sox’ new first baseman smoked it to the center field triangle for an RBI double that would drive in the eventual game-winning run as the Sox earned a much-needed 4-3 victory over the O’s at Fenway Park.

Despite a trade deadline selloff, the O’s have been orange-hot, speeding ahead of the Sox in the American League East standings and pulling into a tie with the Rays for the third Wild Card spot entering Thursday.

But a win from the last-place Red Sox snapped a four-game losing streak and pulled them back within four games of Baltimore with 49 games left to play.

It’s been hard to make sense of the Padres’ decision to cover all $39 million of Hosmer’s remaining salary over the next three seasons while shipping him to Boston for prospect Jay Groome, but a look at his numbers against fastballs this year could be a clue.

After J.D. Martinez drew a two-out, full-count walk in the sixth, Hosmer hammered a high slider to the center-field wall for an easy RBI double.

He’s also been a solid defender at first base, where the Sox have struggled to field a reliable glove all year, and with his clutch hit on Thursday, Hosmer earned his first critical achievement in a Red Sox uniform.

For what it’s worth, the Sox weren’t close to signing him before the 2018 season, when they signed Martinez instead. Manager Alex Cora said Thursday that, while the Sox’ interest in Hosmer was legitimate, they never reached the stage of negotiations where Cora reached out directly to Hosmer.

Instead, Cora flew to Orlando to help recruit Martinez, who eventually signed a five-year deal with the Sox.

2. The Red Sox are in need of effective starting pitchers but can’t seem to find any.

Josh Winckowski has been OK at times, but hasn’t been powerful enough, sharp enough or consistent enough to get on a run.

Thursday, he maneuvered his way out of trouble in the first inning, settled in nicely to get through five and then regrettably fell apart in the sixth.

Cedric Mullens hit a leadoff single and then Winckowsk couldn’t find the strikezone on a five-pitch walk to Adley Rutchman. He retired the next two, but after working ahead 0-2 on Terrin Vavra, he hung a dead-red slider and Vavra smoked it for a two-run triple.

That pitch ought to stick with him for a while. If it doesn’t, the next play will.

Winckowski induced weak contact off the bat of Austin Hays, but took his time fielding the ball, bobbled it and then made too slow of a toss to first base as Hays beat the throw and Vavra scored from third to tie things up.

Winckowski’s day was done after 5 2/3 innings, having allowed three earned runs on six hits and two walks, striking out two.

He’s now made 11 big league starts and the Red Sox have won six of them, though his 4.69 ERA and low strikeout percentage (34 strikeouts in 55 2/3 innings) indicate that the 24-year-old still has a lot of developing to do.

John Schreiber pitched two important innings in the eighth and ninth to earn the save.

Xander Bogaerts might be wearing the Red Sox uniform for the final season, but he continues to etch his name into the franchise history books.

Bogaerts hit a first-inning double that led to the Sox’ first run of the game and also marked the 300th double of his career. It’s quite the pace for the 29-year-old Bogaerts, who is now the eighth player in club history to record 150 homers and 300 doubles.

Only 24 players in MLB history have done it before turning 30, but only one other shortstop (Alex Rodriguez) and only one other Red Sox player (Carl Yastrzemski).

Bogaerts has 30 doubles on the year and should easily surpass the 34 doubles he had last year. His career-high is 52 doubles in 2019, when he finished fifth in American League MVP voting.