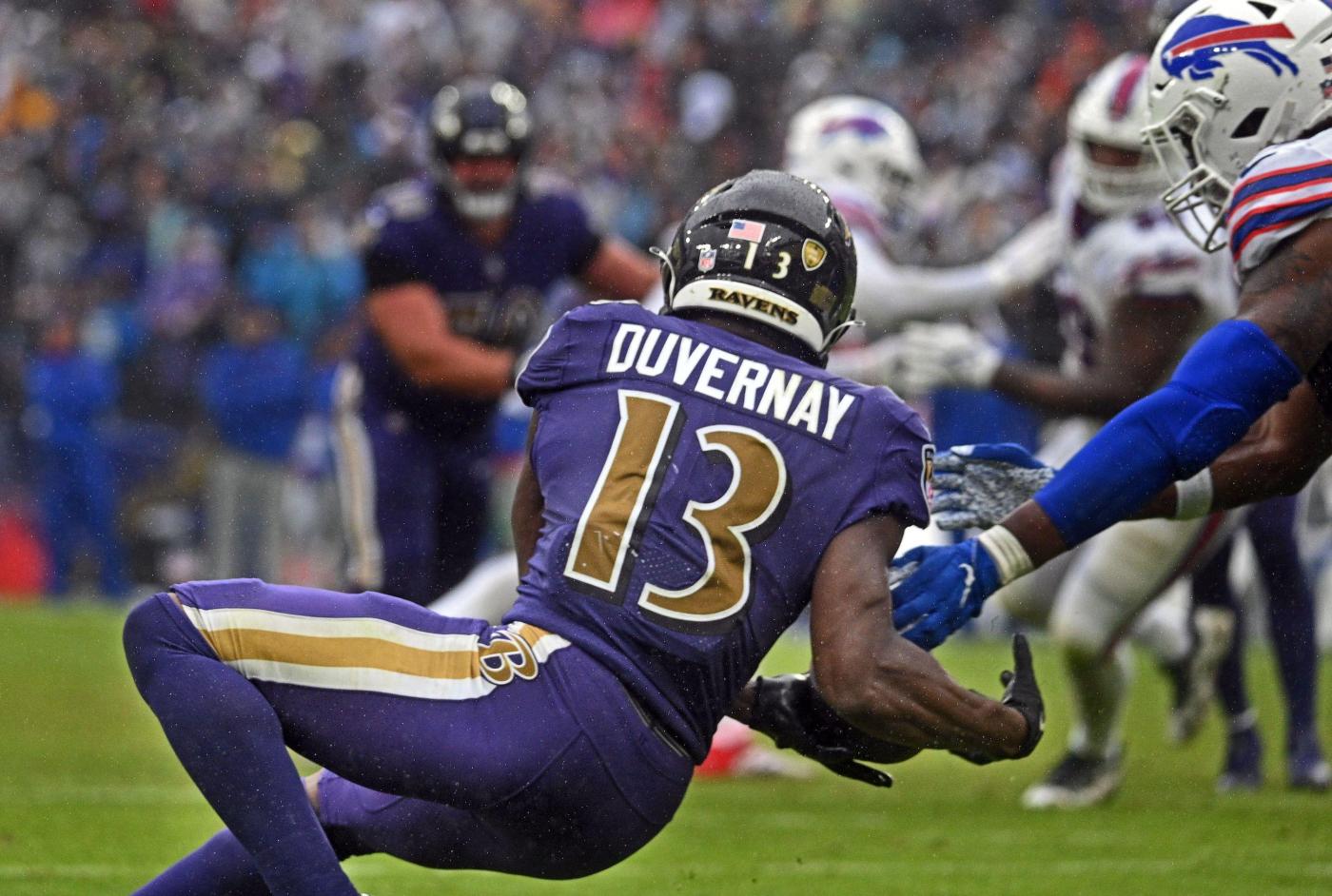 The first four weeks of the Ravens’ season were not normal.

In their two double-digit road wins, they beat up on franchise icon turned New York Jets starter Joe Flacco and needed three fourth-quarter takeaways to hold off the New England Patriots. In their two narrow home losses, they watched the Miami Dolphins outscore them 28-3 in the fourth quarter and the Buffalo Bills take their first lead on a last-second field goal.

As the Ravens’ first prime-time test of the season nears, a “Sunday Night Football” showdown in Baltimore against the defending AFC North champion Cincinnati Bengals, the team has impressed seemingly as often as it’s confounded. Almost a quarter into the season, here’s what Baltimore Sun reporters Childs Walker and Jonas Shaffer and editor C.J. Doon make of the Ravens’ 2-2 start.

We’re nearly a quarter into the Ravens’ regular-season schedule. How would you grade their start?

Walker: Better than it feels coming off another blown lead at home. Fans are despondent given the nature of the Ravens’ two losses, but plenty has gone right for this team. Their offense, led by Most Valuable Player candidate Lamar Jackson, is one of the best in the league. Their defense has created 10 turnovers through four games after creating 15 all of last season. They’re third in Football Outsiders’ DVOA, which measures a team’s efficiency by comparing success on every single play to a league average based on situation and opponent. They’re in a three-way tie atop the AFC North, so it’s not as if they’re buried in the standings. So call it a B or B- despite the frustrated vibes around their loss to the Bills.

Shaffer: Maybe a C+, but that’s as much a reflection of the teams they’ve lost to as the players they’ve lost or missed. Cornerback Kyle Fuller’s absence has loomed large at times. So has left tackle Ja’Wuan James’. The outside linebacker group is already riddled with injuries. Left tackle Ronnie Stanley, running back Gus Edwards and outside linebacker Tyus Bowser still aren’t back. When training camp started, the hope was that the Ravens’ depth at key positions would be fortified by Week 1. It wasn’t. And when the Ravens took big leads against the Miami Dolphins and Buffalo Bills, the expectation was that they’d hold on. They didn’t. Things could be worse, but they could also be a whole lot better.

Doon: A solid B. Those blown leads against Miami and Buffalo are tough to swallow, but did anyone think the Ravens would have the league’s most efficient passing attack by Week 5? Even the defense, which has rightly been criticized for its inability to make critical stops, is playing closer to league average (16th in DVOA) than the total yards (425) and points (25) allowed per game suggest. The Ravens are surely disappointed to be 2-2, but 15 teams are .500. There’s no reason to panic.

Which Raven will have the biggest impact when he returns from injury, and how different could this team look by the end of October?

Walker: Stanley is the most important player who has yet to return, but the Ravens’ pass protection has been serviceable without him. So let’s go with Bowser, whose versatility was so important to their defense in 2020 and 2021. The Ravens have asked a lot of Odafe Oweh, Justin Houston and, most recently, Jason Pierre-Paul, and Bowser will take stress off all of them. More importantly, he will give defensive coordinator Mike Macdonald an important chess piece in the pass rush and in coverage. It’s not as if the Ravens will be an entirely different team with Stanley and Bowser on the field, but they won’t be so thin at some of the most important positions in the sport, which will make a difference over the long haul of the season.

Shaffer: Ravens coaches have said that Stanley is in the best shape of his career. If his surgically repaired left ankle cooperates, the trickle-down benefits of getting an elite athlete and an elite technician back at an essential position could be enormous. Patrick Mekari’s a reliable pass protector, but he doesn’t have the size to knock defenders off the line or the athleticism to threaten second-level defenders as a puller. Daniel Faalele has people-moving size, but as a rookie who’s played most of his career at right tackle, he’s still learning how to keep star pass rushers off Jackson’s blind side. A healthy, confident Stanley would open up coordinator Greg Roman’s playbook and expand the offense’s margin for error. When he first hurt his ankle in 2020, Stanley was one of the NFL’s best pass-protecting and run-blocking tackles.

Doon: The Ravens have missed having a big, bruising running back to complement Jackson’s speed. Think about their struggles in short-yardage situations this season — getting stopped at the goal line against Miami, failing to convert a fourth-and-1 to ice the game against the Dolphins, coming up empty on three plays inside the 5 on their final drive against Buffalo. If running back Gus Edwards has the same burst he showed in his first three seasons, when he averaged 5.2 yards per carry, this rushing attack should become a lot more dangerous.

Which player, position or coach has been the Ravens’ most pleasant surprise? And their biggest disappointment?

Walker: Devin Duvernay wins happiest surprise. We knew he was an elite returner, but he has exceeded all expectations as a No. 2 wide receiver, catching 12 of 13 passes thrown his way, three of them for touchdowns. He has been more reliable than No. 1 receiver Rashod Bateman.

Patrick Queen is an easy choice for biggest disappointment. Macdonald has trusted him to play almost every down, but the 2020 first-round pick simply has not progressed enough in coverage or as a sturdy run defender. He makes the occasional big play as a pass rusher, but the Ravens were looking for far more from him.

Shaffer: How about some love for Justin Madubuike? He’s 11th in the NFL in quarterback pressures among interior defensive linemen (11), according to Pro Football Focus, tied with established stars like the Indianapolis Colts’ DeForest Buckner and teammate Calais Campbell. The 2020 third-round pick has 1 1/2 sacks, four tackles for loss and three quarterback hits in four games, putting him on pace to more than double his career totals in each category.

Unfortunately for Macdonald, bright spots in his defense have been hard to find. Players raved about his scheme and his teaching ability this offseason, and it wasn’t hard to imagine his successes at Michigan — especially with the pass rush — and his ties to Baltimore — especially at linebacker — paying off early. Instead, there have been growing pains. Some of the Ravens’ young talents have struggled, and the defense is 29th in the NFL in yards allowed per play (6.2). Takeaways have helped paper over some of the unit’s issues, but that’s not a reliable recipe for success.

Doon: Michael Pierce was Pro Football Focus’ sixth-highest graded interior defender before he suffered a season-ending torn biceps, so he deserves mention as most pleasant surprise. After he missed most of the last two seasons in Minnesota, nobody knew what to expect from the 355-pound veteran. Houston has also looked ageless, recording two sacks and eight pressures in four games.

The biggest disappointment, and perhaps the most surprising, is Oweh. He looked poised for a breakout season in training camp, and while there’s still plenty of time for him to make his mark, the second-year outside linebacker has just one sack while grading poorly as a run defender. The Ravens’ defense needs much more from him.

What’s the Ravens’ biggest weakness, and how fixable is it?

Walker: They’re struggling to finish games because they can’t run the ball reliably or get to the opposing passer on key defensive possessions. The running game will probably round into better form as J.K. Dobbins continues to recover from a brutal knee injury and Edwards nears a comeback from his torn ACL. The pass rush also has potential, given that the Ravens will get Bowser and Houston back, with second-round pick David Ojabo a candidate to join them late in the season. But they have not been as creative with their blitzes under Macdonald, and they’re near the bottom of the league in pressure rate, according to Pro Football Reference.

Shaffer: If Bateman’s foot injury sidelines him for more than a game or two, the Ravens’ passing game will be on thin ice. Duvernay’s been a revelation as a complementary wide receiver, and tight end Mark Andrews essentially functions as a wideout, but there’s not a lot of reliable pieces beyond that. The most pressing issue, though, remains the pass rush, especially off the edge. If Macdonald’s hope is to confuse quarterbacks with late safety rotations and disguised coverages, he needs a defensive front that can bother quarterbacks with just a four-man rush. Bowser’s return should be a boon to the overworked Oweh, but neither’s a certified star.

Doon: Is it fair to say overall roster depth? According to Pro Football Focus, only the 49ers and Buccaneers have lost more wins above replacement (WAR) to injury, excluding quarterbacks, this season. It only took three games for the Ravens to thrust rookie fourth-round pick Faalele into the starting lineup at left tackle, a position he never played in college. Pierre-Paul played nearly 86% of the snaps against Buffalo just days after being officially signed. The Ravens are expected to get reinforcements soon, but they could ill-afford another setback.

Are the Ravens’ hopes of an AFC North title better or worse than when the season started?

Walker: Slightly better, because the Bengals have not built an early lead on them. We could flip that on its head and say the Ravens should kick themselves for not capitalizing on their golden chances to build a cushion with wins over the Dolphins and Bills. But they have played better than the other teams in the division, and as long as Jackson stays upright, there’s every reason to believe they’ll stay at the top. The Ravens have the easiest remaining schedule in the AFC North, according to Football Outsiders, so it’s not as if the Bengals or Cleveland Browns will gain an advantage that way.

Shaffer: Slightly worse. They haven’t separated themselves from the Bengals, whose Week 2 loss to the Dak Prescott-less Dallas Cowboys suddenly looks a lot more understandable. Cleveland has a strong ground game powering a better-than-expected offense, along with a talented defense that should stabilize before long. The Pittsburgh Steelers don’t face the Ravens until Week 14, by which point outside linebacker J.J. Watt should be healthy and rookie quarterback Kenny Pickett could be competent. But if the Ravens win Sunday and beat Cleveland in Week 7, it’d be their division to lose.

Doon: Better. Have you looked at the standings? The Browns are 2-2 with losses to the Jets and Falcons. The Steelers are 1-3 and turning to a rookie first-round pick at quarterback. The Bengals have won two straight but are still struggling to protect quarterback Joe Burrow, allowing 16 sacks in four games. We know Cincinnati is talented enough to repeat as division champion, but the early cracks might be the first sign of some expected regression.