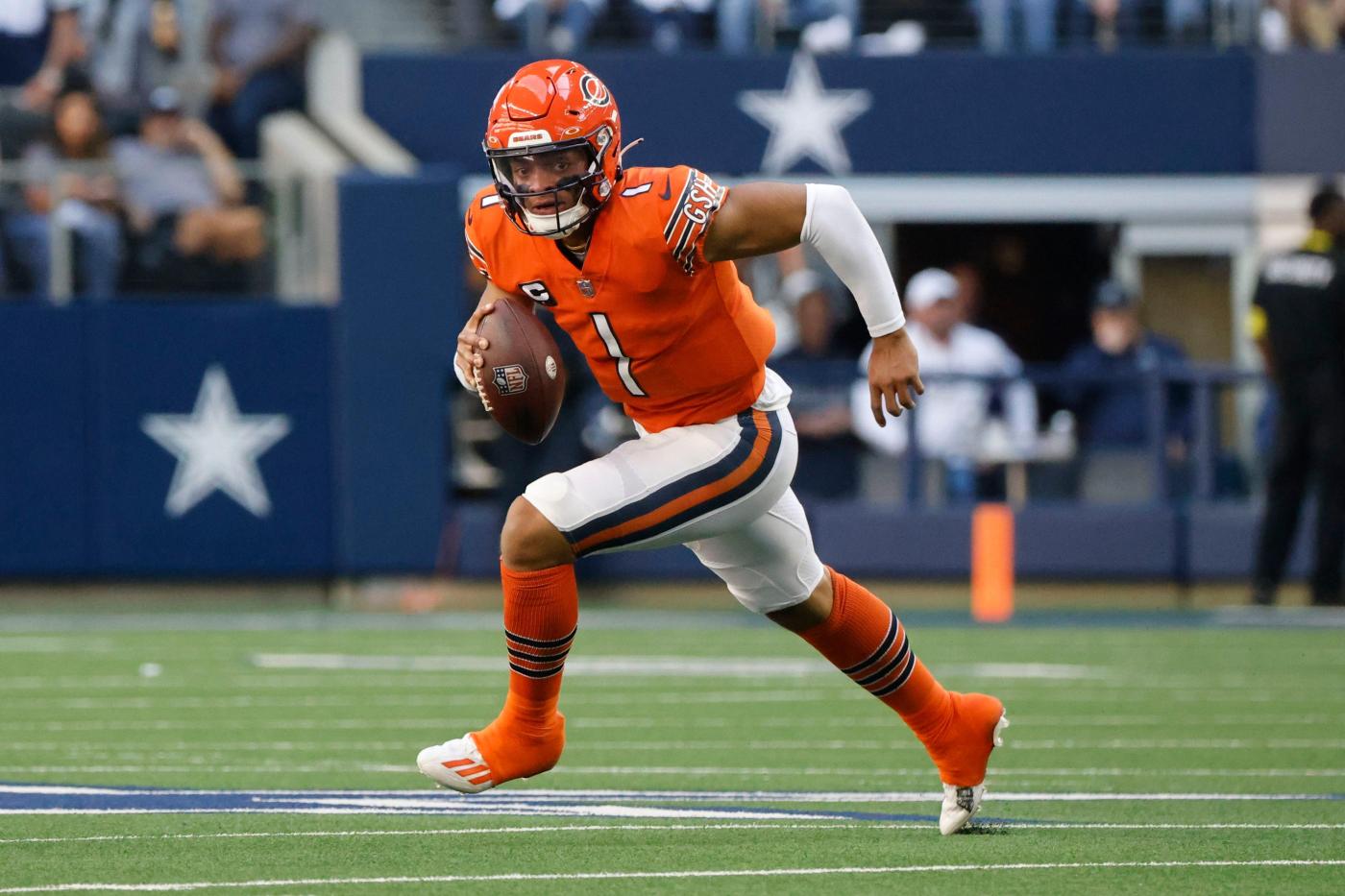 The NFL’s cyclical offensive evolution has brought the league back to where it started. Running the football is back in vogue.

This season’s historic pace for rushing success is helping teams win games in a league where passing has been crowned king.

At its core is a group of quarterbacks whose modern skill sets has prompted smart offensive coordinators to adjust and put defenses built to defend the pass on their heels.

The Giants (6-2), long behind the curve of NFL offensive innovation, suddenly are at the forefront of how the league’s most creative offenses are successfully deploying dual-threat QBs.

“What they’ve done is answer the question: what gives us the best chance to win?” former NFL GM Michael Lombardi said on the phone Thursday. “And the Giants have coaches like Brian Daboll and Mike Kafka who have enough experience to know what to do.”

Through Week 8, NFL teams are averaging 4.54 yards per rushing attempt, the highest at this point of any season since the 1970 AFL-NFL merger. That would smash the NFL record for a full season (4.42 in 2018) if it sustains.

NFL games this season are averaging 240.7 total rushing yards, the most through eight weeks since 1987 (243.7). And this record-setting pace has everything to do with the quarterbacks.

Seven QBs are on pace for 100-plus rushing attempts this season, nearly double the record of four set in 2020, according to NFL Research. Five of those seven teams are in playoff spots. Four are in the NFL’s top eight, including the top two: undefeated Philadelphia (8-0) and Buffalo (6-1).

The league has seen QBs explosive or historically productive in the running game before, including dynamic players like Cam Newton, Michael Vick and Robert Griffin III.

But one coach said “a big reason” for the uptick in quarterback rushing recently is that QBs are entering the NFL with different skill sets than they used to. And the consensus is that this season, more teams are specifically installing offenses to use their QB as a regular runner.

“When you play a team like the Ravens, it’s so different from all the other weeks,” one defensive coordinator said. “So it forces guys to do things they are not used to or comfortable with.”

Lombardi calls it “the Six-Back offense:” defenses have to account for six possible ball carriers, not five, when the quarterback is a constant running threat. And one offensive coordinator said defenses don’t typically practice tackling against that smashmouth attack — like fitting a hole against a fullback to stop a downhill run, something that used to be commonplace.

“There isn’t physical practice, and there are limited opportunities to work on that area of the game,” the OC said, alluding to collective bargaining agreement changes that limit on-field work.

It’s like when top NCAA football programs play against one of the service academies. They have to tear up their normal practice routine and pivot to punishing, assignment-driven football. Now imagine Army, Navy or Air Force running the option with five-star recruits.

One coach said teams mostly have “small defenses built for the pass” now, too, due to the game’s evolution and passing’s proven correlation to scoring more points. A defensive coordinator echoed that linebackers are smaller now than they used to be.

So Brian Baldinger, the NFL film guru and former lineman, said offensive coordinators are countering defenses’ smaller and speedy outside linebackers by sending their O-linemen downhill.

“They’re nullifying teams who load up on undersized pass rushers,” he said.

Another defensive coordinator said it’s not just as simple as recruiting heavier defenders, though, because receivers and passing games have never been more dangerous with explosive plays.

“I feel like people have so many weapons on the outside,” the DC said. “So it’s forcing defenses to play more 2-shell coverages [with two safeties high], and offenses are taking advantage by running it.”

Baldinger said offenses are also setting up defenses — and trying to take them out of those conservative looks — by “using a committed run game to take their shot pass plays” off of play action.

All of these variables explain why it’s not just the quarterbacks having success on the ground.

Four players are averaging more than six yards per carry through Week 8 with a minimum 75 attempts. It’s the Ravens’ Jackson (7.37) and three running backs: the Cowboys’ Tony Pollard (6.25), the Jaguars’ Travis Etienne (6.21) and the Bears’ Khalil Herbert (6.19).

That’s only happened 17 times since the 1970 merger. Four of them were this season. Jackson’s 7.37 yards per carry average is the highest ever by a player through eight weeks, per NFL Research.

Through six weeks, Football Outsiders’ rushing efficiency metric league-wide (7.3%) was the second highest it’s been in over a decade. There are 11 teams averaging over 4.9 yards per carry through eight weeks. There were only four at the same time this year.

The run-pass option (RPO) is one of the running schemes giving defenses fits and leads to a lot of stretch runs for big gains to backs on the outside.

On an RPO, the offensive line blocks as if it’s a run. The QB in the shotgun can hand the ball to the running back or pull it and throw. Off an RPO or on a read-option, the quarterback also might run himself instead of throwing when he pulls the ball away from the back.

Lombardi said a lot of defensive lines are now playing a “double sink” look to combat the handoff inside on RPOs, loading the middle to cover the center and offensive guards. So that leaves the outside off the tackle vulnerable.

One defensive coordinator said that RPO action “puts a lot of stress on linebackers to see run or pass” behind the line. That sometimes makes them a step slow in reacting to the play.

“Space, misdirection and movement,” former NFL wideout Bennie Fowler said of what the schemes create. “It’s the play calling, plus the athlete, plus the arm. The play calling isn’t just, ‘Hey we’re doing a QB draw.’ Now it’s, ‘Hey, we’re doing an RPO with Saquon [Barkley] in the backfield.’

Lombardi notes that coordinators of the seven QB-run-heavy offenses are “trying to limit the QB from making a mistake.” In other words, the coaching staff doesn’t trust their quarterback as a natural thrower or true pocket passer.

Still, the sign of a good coach is adjusting to a player’s strengths.

The Bears are a great example. Fields always profiled as a better runner than a passer. But it wasn’t until Week 7 that Chicago head coach Matt Eberflus and offensive coordinator Luke Getsy overhauled the offensive plan with Fields as a rusher at its center.

The result was a 33-14 road win over the New England Patriots, with Fields carrying the ball a career-high 14 times for 82 yards and a touchdown.

Fowler pointed out that defenses are trying to adjust on the fly, too. It’s not normal to see teams spend premium assets on inside linebackers. But the Ravens just traded second and fifth-round picks to Chicago for middle linebacker Roquan Smith at the NFL trade deadline.

The reason? Look where the league is going. Look what defenses now have to stop.

It will be fascinating to watch what impact these schemes have on scouting, NFL drafts and team compositions starting in the spring of 2023. For now, defenses are still trying to figure out how to stop it, and some of the NFL’s best teams are winning because of it.