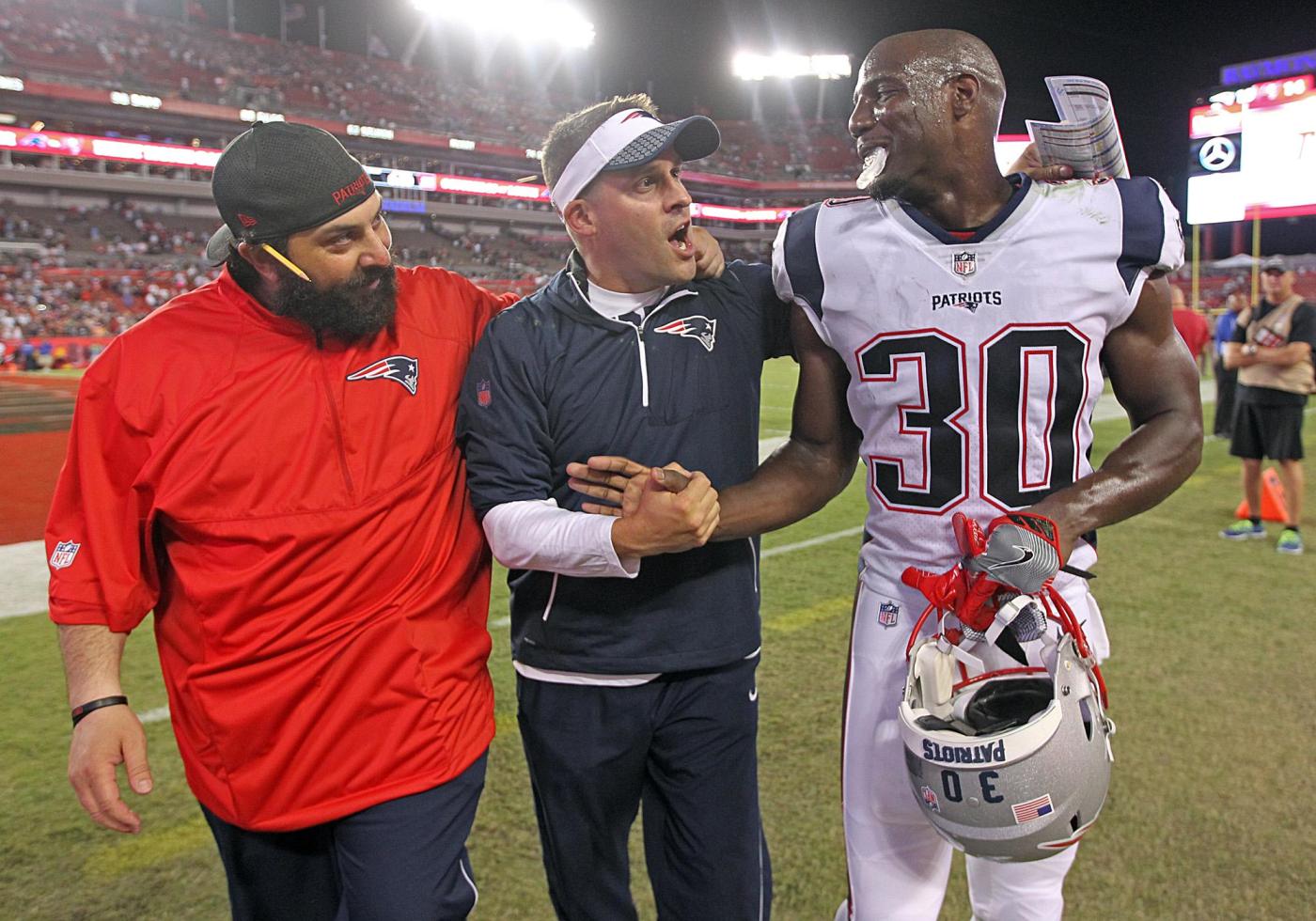 HENDERSON, Nev. — For someone who’s never taken a snap in the Patriots’ offense, Raiders safety Duron Harmon knows the system as well as anyone.

Harmon sharpened his skills by practicing against that offense for the first seven years of his career in New England and now sees it daily playing under former Pats offensive coordinator Josh McDaniels in Las Vegas. This week, Harmon had double vision in Patriots-Raiders joint practices, as defended his old team and watching McDaniels’ new crew go to work in team periods.

Though, the way Harmon saw it, there was one major difference in how the Patriots’ offense operated under new lead assistants Matt Patricia and Joe Judge.

“The stacks and motions, we all know that’s big in Josh’s offense. We get that every day when we practice here. Their empty (formation package) is the same. I would just say it’s more so how they’re attacking,” Harmon told the Herald this week. “They obviously can run the ball, and I think they’re making a big emphasis on being able to run the ball because they’ve got really good backs, and they want to get them the ball.

“And that’s the main difference. Really sticking to bigger personnel, and then when they want to throw the ball, they can go to lighter personnel.”

Bigger personnel in the post-McDaniels era means playing through multiple tight ends, not backs, as the Patriots told former fullback Jakob Johnson they were eliminating his position when he walked in free agency. The Patriots are now a one-back offense, instead of a team that annually ranked in the top five for two-back usage the last half-decade. Choosing a second tight end means the Patriots are counting on Jonnu Smith to provide more value than a third wide receiver and rebound from the worst statistical season of his career since his rookie year in 2017.

“Jonnu is a good player. It was good going against him this week,” Harmon said. “He gave us some really good looks. Obviously we know he’s fast, but he did a good job of catching the ball and getting open. They’ve got some really good tight ends.”

A run-first mentality also would fit how coaches with defensive backgrounds, like Patricia, prefer their offenses run when they’re elevated to lead positions. Despite the Pats’ obvious struggles in joint practices — at least five of the starting offense’s seven run plays were stuffed on Tuesday, and the unit ran just four hand-offs on Wednesday — the run game has Harmon’s attention first and foremost.

Harmon is also a believer in Patricia, whom he played under in New England from 2013-2017 and later a Lion in 2020. He called Patricia one of the smartest and hardest-working coaches he knows, and insists he’ll “figure it out.”

As for Patricia’s predecessor, McDaniels said Wednesday he recognized many familiar concepts during team drills, as well as some new ones.

“I’m sure they’re evolving. We’re evolving here. There were plenty of things I saw yesterday that I knew,” McDaniels said.

He later added: “I think there’s elements on both sides where you’re seeing that and saying, ‘I know what that is.’ And then they’re seeing something new and saying, ‘Oh, that’s a wrinkle here or there.'”

Among those wrinkles is an emphasized outside zone run game the Patriots are trying, with middling success, to pair with a bootleg play-action passing game; plays that inspired a “Shanahan-style” misnomer for this offense early in training camp. Marrying outside zone runs with play-action fakes that send the quarterback in the opposite direction is an old trick, one Belichick ran and called as far back as his first year as a head coach in Cleveland in 1992. But, according to Harmon, it hasn’t lost its effect all these years later.

“Because you get everyone playing sideways, he said. “When you get the good play fakes, you get linebackers sucked in, and then the second level is usually wide open for crossers, overs, in-cuts, and then those plays are chunk plays, 20, 25-yard plays,” Harmon said. “And when you’ve got good runners like New England has, that can easily go from a 25-yard play to a 40, 50-yard touchdown.

“So they’re doing the right thing over there.”