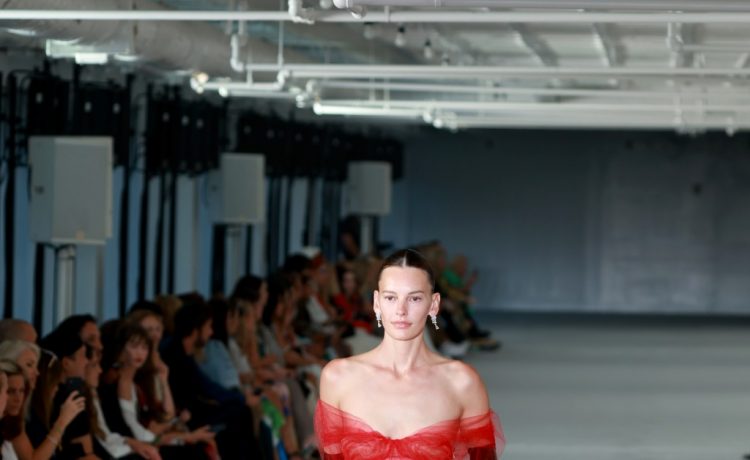 Maybe it was the thought of a far-off spring, or the relative return to normalcy after years of a pandemic. But whatever inspired so many designers at New York Fashion Week, it resulted in a feast of cheerful — and downright adventurous — looks.

As usual, the shows rolled out all kinds of new and tweaked ideas for Spring 2023.

There was Ulla Johnson, a festival of purple hues and bright yellow — in textured solids and patterns that were by turns electric and soft. Lots of side cutouts, fluttering layers and wings, and drape-y wide legs. In short, stuff you can’t wait to wear.

Ruffles were also a prominent thing at Proenza Schouler, which is coming up on its 20th anniversary. The designer duo Jack McCollough and Lazaro Hernandez sent out flamenco-inspired ruffles, bell sleeves and lace shirts. And nearly the entire collection came out in all black, white, robin’s egg blue or chartreuse.

Tibi also brought in some bona fide elements of celebration. Designer Amy Smilovic put together looks full of easy and informal maxi skirts and low-waisted pants — all of them fun and flowy. There was her whimsical one-sleeved blazer that sure, you could wear to an office, but not without making a devil-may-care statement.

And yet more ruffles came from Badgley Mishka. Designers Mark Badgley and James Mischka have clearly been doing some global traveling lately, and it showed in their collection, inspired by Marrakech and Casablanca. Witness the ruffled frocks they showed in luxe tomato-red organza evening gowns, next to streamlined satin lime-green blazers for day, and saffron midi dresses for just about anytime.

Veronica Beard’s collection was as wearable and professional as ever, but with some added pizzazz. Designers Veronica Swanson Beard and Veronica Miele Beard did right by their fan base, with meticulously tailored suits and jackets, but threw in plenty of prints and unexpected color combos. (Bronze meets robin’s egg blue, anyone?)

But the biggest buzz all week has come out of the Marni show, which was staged by Francesco Risso underneath an active subway bridge in Brooklyn. Instead of showing in Milan as usual, the Italian designer spread his wings for NYC, and went in for big displays of color and textures: technicolor short skirts, unisex shorts and tanks, maxi skirts and long trenches — much of it emblazoned with circular patterns that were big and busy. Like so many of the best pieces shown this season, it was bright and unabashedly fun — and had a distinct sense of what’s to come.