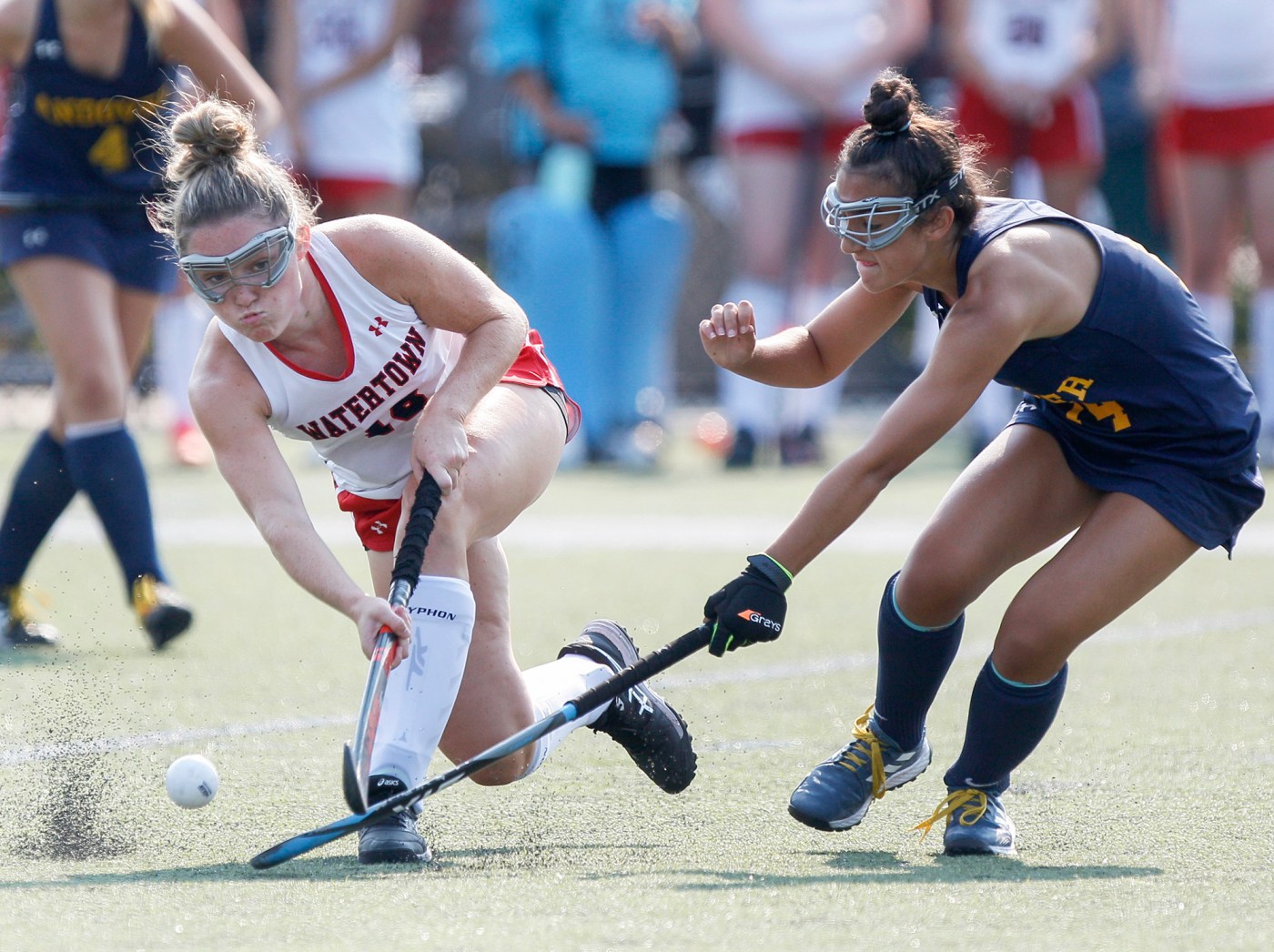 Reflecting on the season in admiration, weeks before the playoffs begin, isn’t something the storied Watertown field hockey program typically does.

At practice on Monday, though, before a pair of wins later in the week pinned the Raiders at 16-0, head coach Eileen Donahue gathered her group to talk about the pride in what they’ve accomplished. A perfect record and a 100-1 goal differential is quite substantial, especially when doing so against a bevy of talented programs with legitimate state title aspirations.

Donahue emphasized to her players to appreciate that. But even more so the hard work and sacrifices each player has committed to reach these heights thus far.

That’s what separates the program from others.

“Our record is our record, but the amount of work that’s been put into this, it’s been a lot,” Donahue said. “I want our team – they should be proud of our record. Extremely proud, never to forget that. It can be a long process. … But they all know it isn’t, ‘Oh you’re (16-0).’ They know it’s taken a lot out of everyone and we’ve gone up against some very strong teams.”

It’s become such a broken record to talk about how successful the Watertown field hockey team is that the present is too easily drowned out by looping it with the legacy of the past. But in their own right, this group is every bit as special.

Donahue isn’t one to count out the numbers – the clichés in her repertoire ring nearly as loud as her program’s everlasting victory bell. But with 47 straight wins, the Raiders have a legitimate chance at cracking 50 straight once again. Their 15 shutouts are the most in the state entering the weekend and beating perennial contender Andover is something no other Watertown team has done.

Third-year captains Maggie Driscoll and Lizzie Loftus have starred through it all as two-time All-Scholastics, while junior Molly Driscoll has served as an elite scorer in each of the last two seasons. Many contributors have filtered through alongside them, but the ones playing critical roles this year help put the Raiders in great position to defend their Div. 3 state championship.

Again, there’s a lot to take pride in.

“It definitely means a lot (to win so many straight),” Maggie Driscoll added. “All the records in the past, we’ve all looked up to those teams. But that’s really inspirational, especially to look back and see what we’re capable of and how far we’ve come.”

As always, there’s still a ton of work to be done. One of the main messages Donahue sends to her team is to have the right respect for every opponent. Nothing is a cakewalk.

That “doing things right” mentality is what led to long discussions postgame after the countless 6-0 and 7-0 wins the team’s racked up in this streak. There are always notes, there are always more tinkers that can be done – especially with Foxboro, Sandwich and Dover-Sherborn banging on the door as serious contenders in Div. 3.

That strive for excellence is what makes the Raiders’ lore so iconic. It’s also what could make it seem a bit scary.

Maggie Driscoll had the luxury of hearing about the challenge from her mother and cousins, who also played for Donahue, to soften the intimidation. But as longtime witnesses to the constant pursuit of greatness, both Maggie Driscoll and Loftus have grown into it and champion the worthwhile process.

“There’s definitely fear, but it’s all about how you respond to that,” Loftus said. “It’s never been to the point where you back down, it’s always just intensity. … Being in the position to compete the way that we’re doing is what keeps us competing at every practice.”

“My mom even would try to remind me that you just got to keep going through it because some days are harder than others but … the end result is always so great. Being here now is a really good feeling,” Driscoll added. “It is intimidating when those expectations are so high, but what you get out of this program is what you put into it.”

Newer to the mix is senior goalie Brianna Cooper, who Donahue raves about because of how seamlessly she’s adopted the work ethic and mentality necessary to be a reliable backbone in goal.

As one of the key role players on this group, Cooper has enjoyed the journey and transforming her game. Just like her fellow seniors, she understands the process – and knows how it’s going to help the team in the long run.

“It’s always been heard that, ‘Wow, the field hockey program must be so hard,’ ” Copper said. “You can always give more than you think. Being in this program over the years that I have been, I know what I’m capable of. … Putting in the time, really being there (is the expectation to get to the next level).”

Since beating Andover 2-1, Watertown hasn’t allowed a goal. The same can be said for the Golden Warriors amid a 15-game win streak of their own.

Much of the talk in preseason predicted Andover as the favorite to win the Div. 1 title for a second straight year, and there isn’t much to suggest the Golden Warriors can’t do it.

Andover features some of the premier star power in the state, but actually has gone a large handful of games missing some of its top talent. Depth has shown off in a slew of high-quality wins. If everyone is healthy come tournament time, that could prove deadly.

The path back to the title game hasn’t been so glamorous for Westwood in the Div. 2 field, and it has its work cut out for it with Longmeadow, Masconomet, Nashoba, Reading, Falmouth and Danvers all playing at a dangerously high level. But while a 4-0 loss to Wachusett on Friday puts the Wolverines at 10-4-2, the “hungry” group has a more experienced approach to each game after winning last year. Its competitive bite just might have the (once again) underdogs primed for another deep run.

Division 4 might just have the most parity of all, but top-rated Uxbridge seems to stand above it all in a powerful regular season showing this year. All the Central Mass. power has done so far is dominate the teams around it. A variety of potent weapons has Uxbridge averaging over seven goals per game, and its 27-game win streak is the second longest in the state. Wins over Monomoy (6-1), King Philip (3-1), Doherty (3-2) and Sutton (5-0) have the group buzzing as the title favorite.