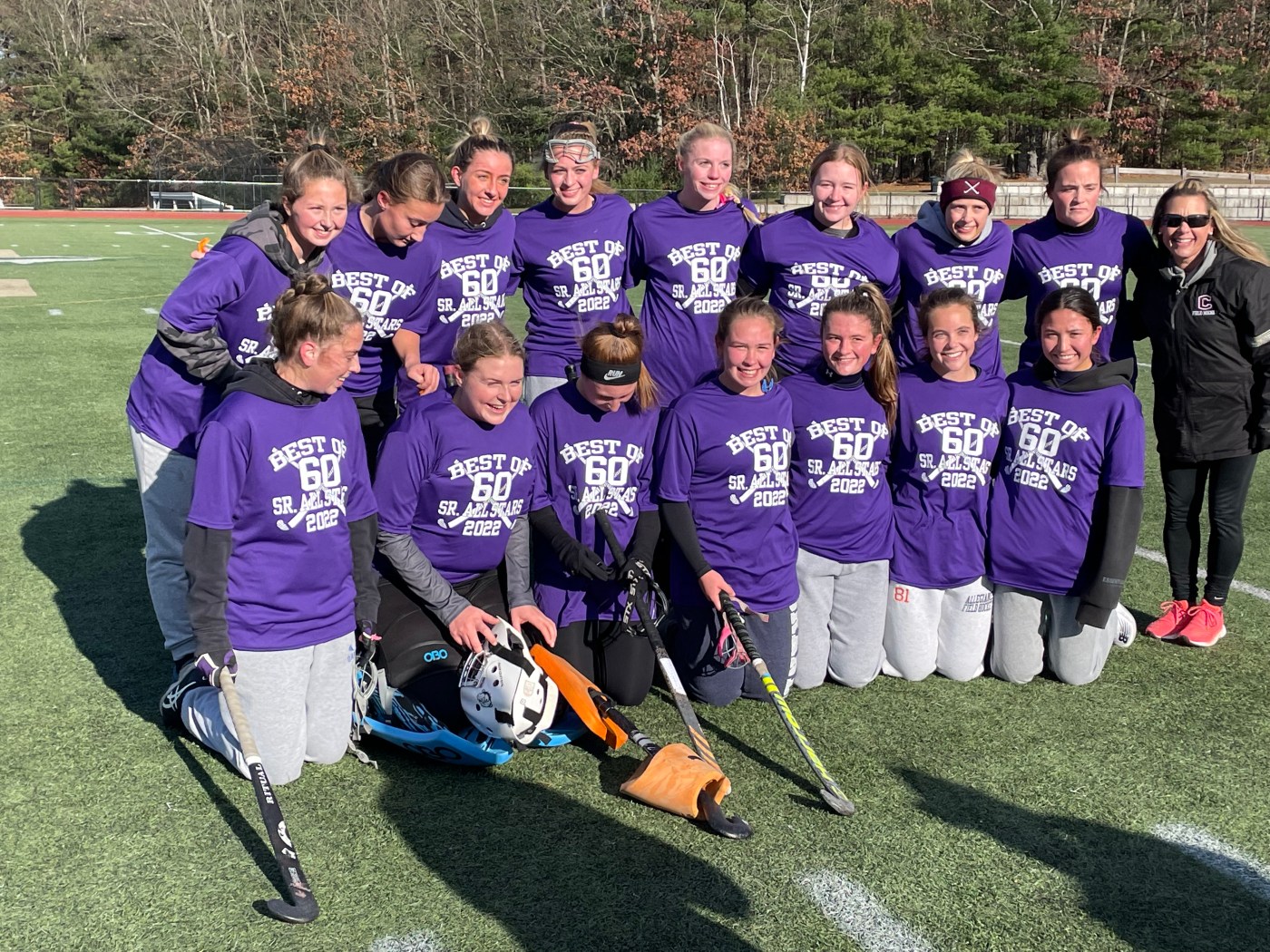 BOLTON – Chelmsford field hockey head coach Susan D’Agostino has known senior star Remoré Serra since the player was very young, and between the town’s youth program and four years on varsity, she’s coached her for the last eight years.

Losing in the tournament was a bitter end to the partnership. But Sunday afternoon, much like for the rest of the 59 other star seniors from across the state playing in the MSFCHA Best of 60 Senior All-Star Games at Nashoba, they got some positive closure with one final game.

This is the first year the four teams competing in the two total games haven’t been split up by the section of the state that players come from, and excellent competition followed from the mix. D’Agostino was the coach for Team Purple, which played a near-perfect defensive game against Team Neon Green en route to a 1-1 tie. That game followed a 3-0 win for Team Neon Orange over Team Red.

“I’ve known (Serra) since she was teeny,” D’Agostino said. “(The players) did their best and they’re all freezing. But they’re all just kind of enjoying playing across divisions, across teams. Just trying to enjoy the day of not really being rivals but just being with good field hockey players and enjoying their last organized high school game.”

The wind was whipping so fiercely, one of the goals blew over in the middle of the second game. But that frigid wind couldn’t whip away the typical brand of elite, friendly field hockey the games bring.

Shrewsbury stars Lexi Kent and Taylor Ryder each tallied goals for Neon Orange in a three-goal first quarter, tag-teaming on offense together one final time. Kristina Aguilar (Minnechaug) scored the other goal, while Watertown senior stars Maggie Driscoll and Lizzie Loftus paired with Shrewsbury’s Maddie Mrva and Somerset Berkley’s Reese Swanson to keep pressure on the other end much of the game.

Team Red boasted quite a few bursts of offense itself, as Masconomet’s Maggie Sturgis and Julia Graves helped lead the attack. Franklin’s Shaw Downing and Bishop Feehan’s Sammie Buonaccorsi limited much of the pressure Orange got at the start as the game progressed, all playing a large role in a finely tuned game despite most of the players never meeting each other before.

“It was very exciting (to coach) … it’s a higher level game,” said Plymouth North coach Janet Hayes, who got to coach senior Maeve Campbell one last time for Orange. “I’ve been around field hockey a lot of my life, and I’ve never had the opportunity to coach and interact with so many strong players at one time. … The way they can spread the field, the way they move the ball. It was a whole new game.”

Two of those players who had never met before are future Boston University teammates Driscoll and Lexington goalie Sophie Ortyl. Ortyl had seven saves in a shutout that Driscoll played a large role in.

“I hadn’t really met her before, so it was nice to meet her … I’m excited for the next four years,” Ortyl said. “It was really fun, honestly. It was nice to have a final game with a bunch of people. It means a lot to me just that my coach even recommended me for it. It shows stuff I do pays off.”

Between the two Green and Purple, the second game featured 11 players that had teams compete in the state semifinals.

“As a spectator, it’s just fun to watch all the skill and all the field hockey IQ,” D’Agostino said. “They know where to pass it, where to have open space. Comfortable with the abilities behind them. … They worked together from the get-go.”