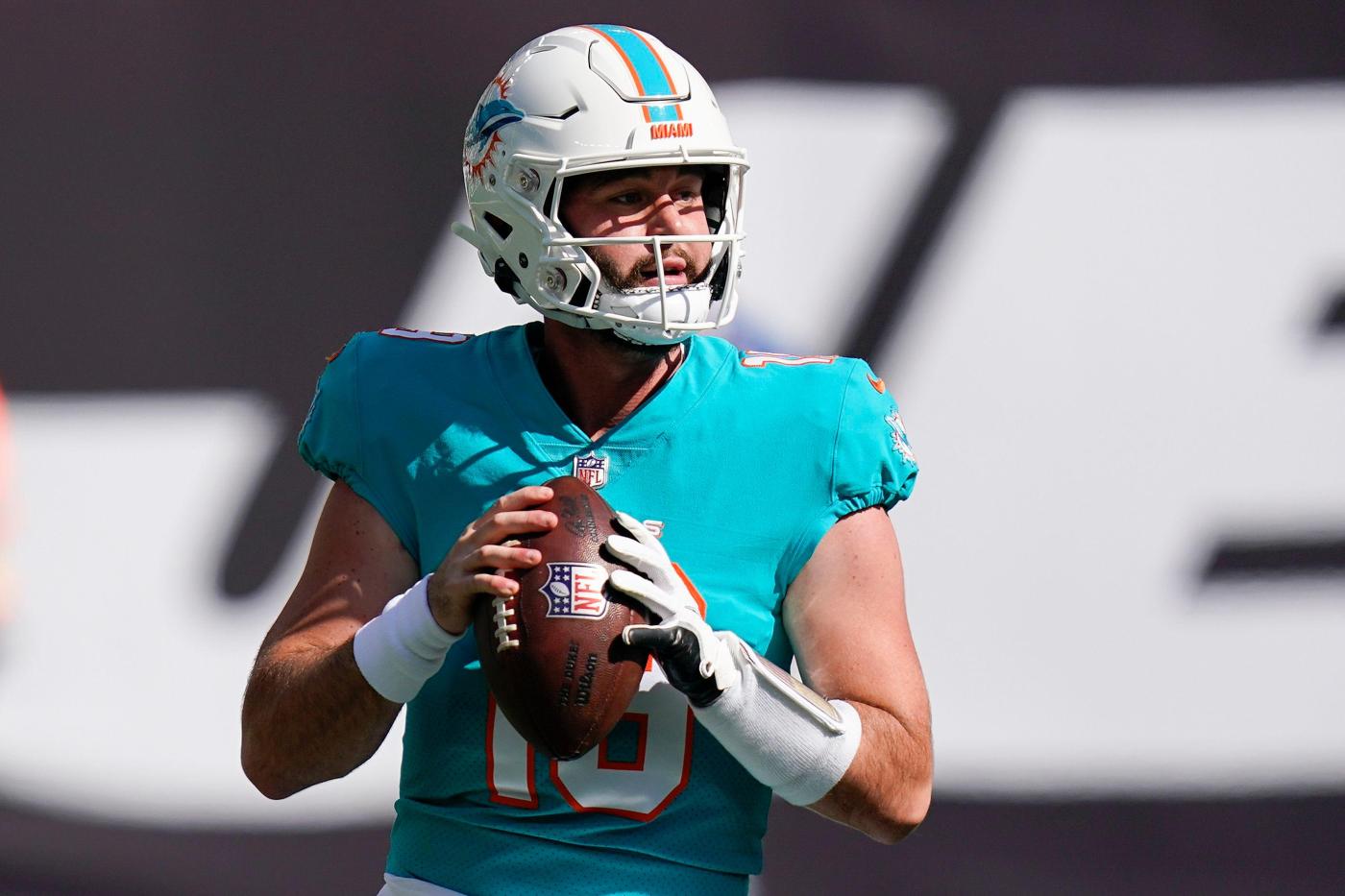 Skylar Thompson can approach the week of practice with the expectation that he will be the starting quarterback come Sunday for the Miami Dolphins against the Minnesota Vikings.

“It’s exciting,” Thompson said ahead of Wednesday practice, where he was bound for the first-team reps as Tua Tagovailoa and Teddy Bridgewater progress through concussion protocol. “It’s a dream come true, something that I’ve worked for my whole life. There’s a ton that goes into that, and I didn’t get here just by myself.”

Because of exactly that, Thompson’s first call when he received the news was to his father.

“He was emotional and excited for me, told me that I earned it,” said Thompson, the rookie seventh-round draft pick out of Kansas State. “He was proud of me. My dad and I have been through a lot, and this was my ultimate goal. For him as a father being able to hear me express what I’ve accomplished, the goal of starting a game in the NFL, it meant a lot to him.

“My dad is probably my go-to. I have a great circle around me of people that have supported me from Day 1 as a person, more so than as a football player.”

Thompson was thrown into the fire in last Sunday’s 40-17 loss at the New York Jets, entering after Bridgewater, who was already replacing Tagovailoa, was knocked out of the game from a hit by New York cornerback Sauce Gardner on Miami’s first offensive play. Thompson went 19 of 33 for 166 yards and an interception while taking 15 hits behind an offensive line that played two backup tackles for most of the game.

On Sunday against the Vikings (4-1), Thompson will have, beyond the possibility of a return of starting tackles Terron Armstead and Austin Jackson, a full week to prepare, which Thompson says helps.

“I’m a very mental visualization person and like to put myself in situations before they happen,” he said. “Having a week of prep, just most importantly, building the continuity of the offense with the snap counts, the cadence, the protections, timing of routes, all that stuff is so important to build throughout the week.”

He’s also feeling the trust of the Dolphins receiving corps too.

“Just trust what you see,” receiver Jaylen Waddle said he told him. “He’s a confident guy. He’s young, but he’s confident in that he can make every throw.”

Thompson reviewed his performance against the Jets after reviewing the film.

“There was lots of learning,” he said. “Definitely some things to be proud about and excited about moving forward, and then there’s definitely some plays that I wish I had back.”

Thompson will also have the advantage of having his fellow quarterbacks on the sideline with him. He had neither Tagovailoa nor Bridgewater to cross-check things they were seeing on the field during the Jets game.

“Huge, because in a game experience for a quarterback, you get coached,” McDaniel said of the impact that makes. “There’s a lot of stuff going on and you’re taking in information from one, two, three voices. But then when you have a peer that has gone through it and has seen it, that translation — it might be one word, it might be a pat on the back — that teammate support is a very immensely huge thing for a player like that.”

Thompson had an impressive preseason against opponents’ backup defenders, finishing the exhibition season with 450 passing yards, five touchdowns and no interceptions while completing 75 percent of passes for a 138.4 rating.

After Bridgewater’s brief stint as the franchise’s 24th different starting quarterback since Dan Marino retired at the conclusion of the 1999 season, Thompson would become No. 25 on Sunday.

The Dolphins (3-2) were without running back Raheem Mostert (knee), Armstead (toe) and outside linebacker Melvin Ingram (veteran rest) at Wednesday practice.

It was a positive sign that cornerback Xavien Howard, who said at his locker he expects to play against Minnesota, was able to practice on a limited basis on Wednesday after missing the game at the Jets.

McDaniel said of Tyreek Hill, who participated fully recovering from a quadriceps injury and his foot ailment that caused him to travel back from East Rutherford, New Jersey in a walking boot on his left foot: “He’s going to get some work in, and he won’t be practicing with a boot on.”

While Tagovailoa began to throw at Wednesday’s practice in his return from concussion protocol, Bridgewater only worked out on the side. Also seen on the side of drills were, defensive end Emmanuel Ogbah (veteran rest) and tight end Durham Smythe (hamstring). Smythe and Bridgewater listed as non-participants while Ogbah was limited.

The Dolphins’ ping-pong table that sat in the heart of the team’s locker room at their practice facility has been removed in a decision made by Hill and the other Miami captains.

“Tyreek and the captains decided that they wanted to take a step forward with all of their opponent prep with regard to the team and their preparations with our game plans in general,” McDaniel said. “They, collectively, as a group of players, wanted more time investment during the week on their jobs for Sunday.

“Instead of just saying it, they did something about it. … That, to me, is leadership. Leadership is acting, not talking.”

The team was in the middle of a player-led tournament that even had a bracket posted on the wall near the table.