Todays Though > News > Fitting the Bruin pieces together
News

Fitting the Bruin pieces together 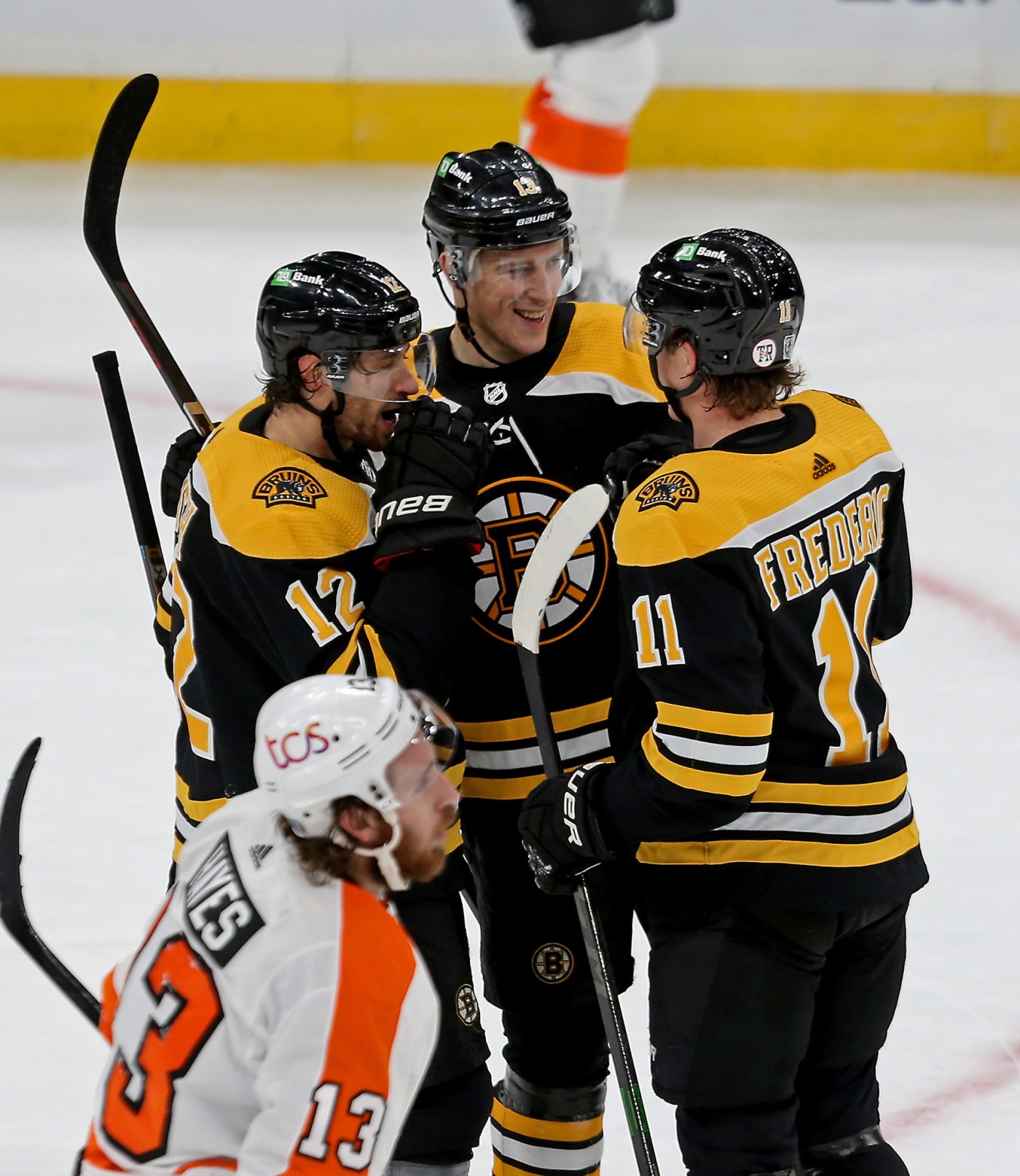 The Bruins have secured the services of Patrice Bergeron and David Krejci for a grand total of a $3.5 million cap hit for this upcoming season. They’ve also procured a still promising 25-year-old forward in Pavel Zacha, who quite possibly could have a higher offensive ceiling than he’s been able to reach while toiling in the swamps of Jersey. These are all good things.

But the B’s will be looking at a serious challenge out of the gate. Their best defenseman, Charlie McAvoy, and arguably best forward, Brad Marchand, will be out until late November, while top four defenseman Matt Grzelcyk will miss at the least the start of the season.

Despite the good feeling surrounding the top two centermen, these facts are capable of derailing the season before it even gets started.

Without fulling knowing what new coach Jim Montgomery might be thinking, here we try to piece together a lineup for opening night on Oct. 12 in Washington that will allow the B’s to keep their heads above water until the Coast Guard arrives in late November. For the time being, we’re discounting the possibility that flashy rookie Fabian Lysell is ready for NHL action.

Zacha, obviously, will not be in this spot when Marchand returns but it could be helpful for him to find his offensive game while playing alongside the league’s preeminent two-way centerman. Zacha, if he’s going to turn the corner in his development, could be one of the keys if this team is going be merely a playoff contender or something more than that. Playing with Bergeron will also be helpful in establishing an on-ice work ethic and expectation for the newcomer, as it did for DeBrusk last year. There was an inclination to let DeBrusk play on his natural left side while Marchand is out, but he’s proven to be a capable right wing and it’s a good bet he’ll end up over there eventually, so they might as well have him continue to get reps on the right side so there’s not a transition period when No. 63 returns.

Everyone expects this line to happen, and it probably should, if only for a “thank you” to Krejci for the deal he signed. But it’s no slam dunk that it will be a success. Hall and Krejci worked extremely well two years ago, but that was when the third wheel was Craig Smith, who did much of the dirty work for the line in the corners and along the walls. Hall and Pastrnak also worked well together last year, with Erik Haula in the middle, but Hall functioned as the center-like distributor. How all these three first line-caliber players can work together remains to be seen. But it will be fun to see if they can.

This grouping had a long enough stretch of good play in February and March to run it back for another look-see, at least until Marchand comes back and shifts all the deck chairs. We know pretty much what Coyle and Smith can bring, though the B’s could use a bounce-back year from Smith, who suffered a lower body injury in camp and took a while to get going. But it will be interesting to see which direction Frederic’s career arc will go. He wants to contribute more offensively, and the B’s would like nothing more, but they could still use some of the sandpaper he brings. He’s just got to figure when and how to apply it.

The bad news is that it’s anyone’s guess what the fourth line will look like. The good news is that competition should be fierce. Nick Foligno, Chris Wagner, Marc McLaughlin, A.J. Greer, Joona Koppanen and Jakub Lauko could all get a look for fourth-line duty. But Studnicka and Steen both re-upped for two years, are at a pivotal point in their respective careers and, given the fact that the B’s need some younger players to turn a corner, they should get a long look. If Foligno and Wagner don’t outplay their younger cohorts in camp, their contracts could be moved, either through trade or waivers to Providence, to help the team become cap compliant.

And herein lies the greatest challenge to overcome. Without McAvoy and Grzelcyk, the B’s will be without half of their top four defensemen. Let’s start with something we know can work. As a third pairing, Forbort and Clifton played very well together in the playoffs and it makes sense that they start the season together, albeit a rung higher because of the circumstances. Lindholm and Carlo had some rough moments together in the limited duty they saw, but a full training camp should at least give them a better chance at succeeding. The loss of McAvoy not only robs the B’s of a legitimate Norris Trophy candidate, it also takes away from a commodity that the B’s do not have in abundance – right-shot defensemen. Grzelcyk is expected to return before McAvoy, but Grzelcyk is one of many left-stick players. The most NHL-ready candidate in Providence, Jack Ahcan, is also a lefty. Someone will have to move over to play the right side on the third pair. With Zboril coming back from ACL surgery, he should be the one to stay on his natural side until he gains a level of comfort.

The B’s cannot afford the same slow start from their netminding tandem as they had last year. But with Swayman in his second full NHL season and Ullmark in his second season with the B’s, there is no good reason that should happen again. And with the situation directly in front of them, the netminders will have be on top of their games. Swayman and Ullmark see-sawed in their battle for the No. 1 spot, with Ullmark winning the starting job for Game 1 of the playoffs before ceding the net to Swayman during the series against Carolina. Going into the final year of his entry-level deal, Swayman is in position to cash in on his next contract. Given the situation, the B’s would like nothing more than to see the young Alaskan have a prosperous season.