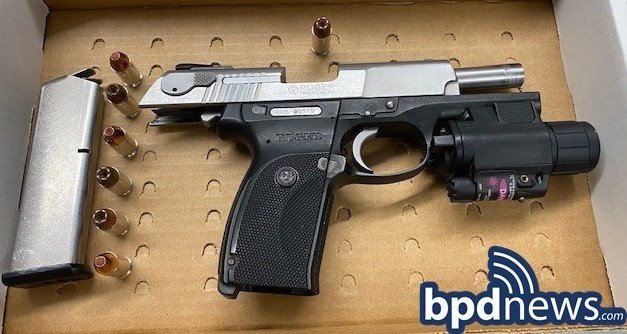 Boston police made at least five firearm arrests during the weekend from Friday to Sunday, pulling 5 weapons off the street, according to department releases.

The first arrest came around 7:13 p.m. Friday, resulting from a joint firearm investigation conducted by the Youth Violence Strike Force and state police. Officers located Roxbury resident Tanaily Pinero, 22, who had several felony warrants for her arrest, with two companions and a child in a stroller around the Downtown Crossing Area.

Pinero and one companion attempted to flee, knocking over the stroller. Emergency Medical Services determined the child was not injured.

Officers found a Glock .45 with 17 rounds of ammunition on Pinero and arrested her on firearms charges. Her companion was arrested for assault after “yelling and kicking” while in handcuffs, according to Boston police.

At about 9:55 p.m. Friday, officers made a firearm and drug arrest near Melnea Cass Boulevard and Albany Street, after pulling over a vehicle for an “unsafe lane change,” according to a BPD release.

During the traffic stop, “several observations” led the police to conclude the driver, 25-year-old Jonathan Lopez of Boston, was in possession of a firearm, according to police.

Lopez was told to exit the car, and officers found a Glock 9mm, 15 rounds of ammunition, marijuana and “a quantity” of cash, police said. Lopez was arrested on firearm and drug distribution charges.

On Saturday at about 12:58 p.m., officers also arrested Jacques Flowers, 34, of Roxbury on firearm charges around Washington Street and Ruggles Street in Roxbury. Police stopped and frisked Flowers, according to the department, “based on information gathered from an ongoing firearm investigation.”

Around 7:34 p.m., officers located a Dorchester-resident wanted for felony assault charges, Marc Serrano, 28, around Columbia Road, the department reported. Serrano was carrying a Norma 9mm Luger and 25 rounds of ammunition and arrested on additional firearm charges.

On Sunday around 1:18 a.m., police on patrol found two men apparently stealing scooters in an alleyway near 1 Oxford Place in Chinatown, according to the department.

The suspects, carrying a power drill and other tools, were unable to provide proof of ownership for several damaged scooters and arrested. One suspect, Jeffrey Salvant, 35, of Roslindale, was additionally carrying a loaded 9mm firearm with fifteen rounds of ammunition and substances believed to be cocaine and marijuana.

BPD data released earlier in the week reported 343 firearms arrests this year, just a bit below the 353 by the same date in 2021.