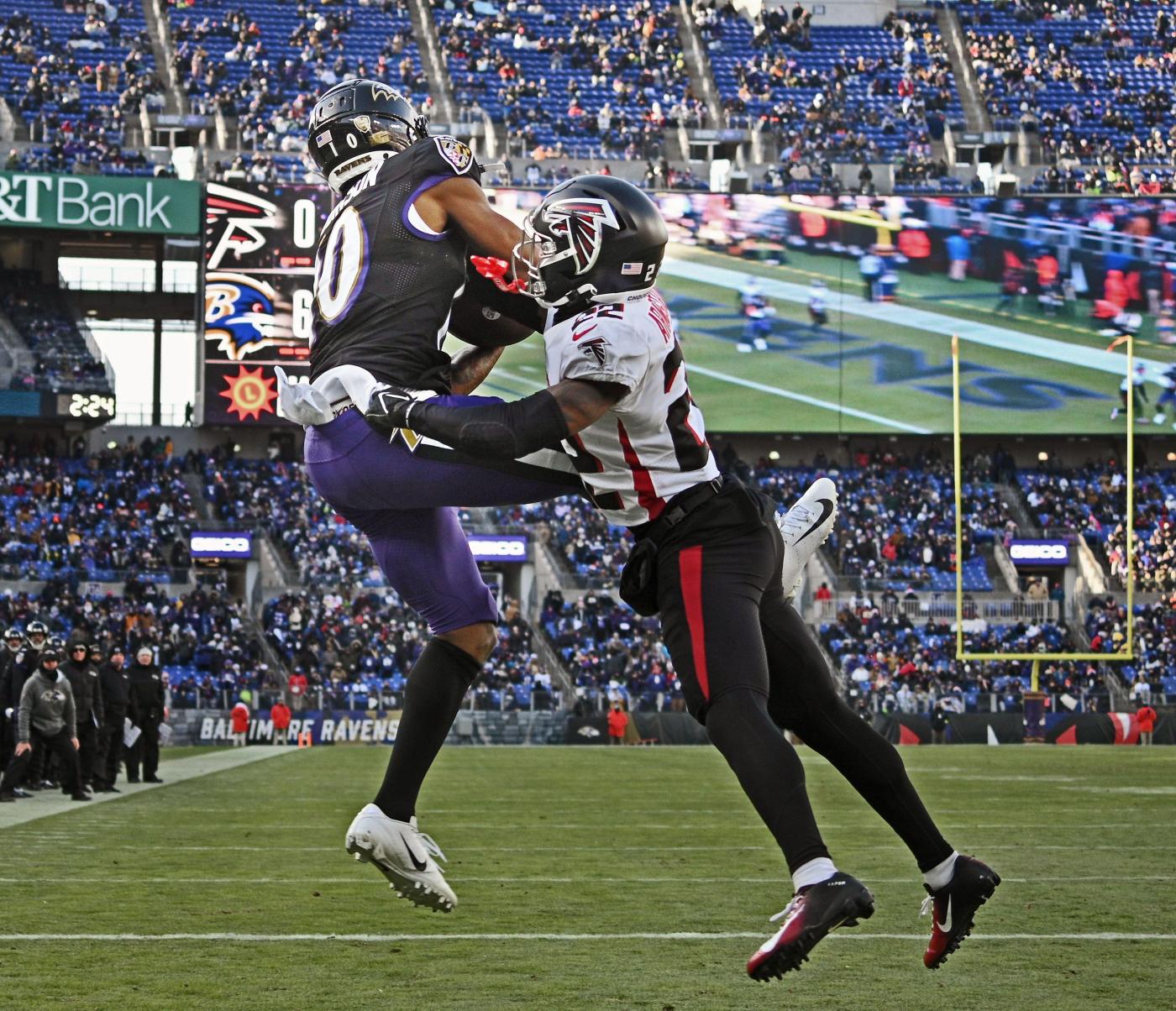 The Ravens did not make it easy on themselves. They never do. But they’re playoff-bound thanks to their running game and a few timely defensive stands in a 17-9 win over the Atlanta Falcons.

Here are five things we learned from Saturday’s game.

The Ravens reached the playoffs the way they’ve done everything else: hard and tense.

We knew it would not be elegant. It rarely is with these Ravens, even when they achieve big goals.

They did find the end zone, after avoiding it for four quarters a week earlier in Cleveland, but only once. They needed a goal-line stand and a subsequent red zone stop in the fourth quarter to hold off the Falcons, who had lost five of six coming in and started a green-as-broccoli rookie quarterback in Desmond Ridder.

The hardy fans who showed up for the coldest home game in franchise history booed the Ravens’ own red zone failings. Quarterback Tyler Huntley, starting in place of Lamar Jackson for the third straight game, completed just nine passes for 115 yards.

No, this was not football as art.

But seasoned Ravens watchers knew that would be too much to ask. They wanted a win for Christmas, and their team delivered, carrying the ball with fury over the cold, hard ground and standing firm when it was time to send the Falcons home defeated.

The Ravens did not repeat the great unraveling of 2021, when they lost their last six to drop from the top of the AFC to out of the playoffs. Over the past four games, Jackson, their unquestioned centerpiece, has played one of 16 quarters. The Ravens have gone 3-1 regardless.

“I think this team has stuck together,” coach John Harbaugh said, a few seconds before he watched the Cincinnati Bengals send the Ravens to playoffs by holding off the New England Patriots. “They’ve had each other’s backs all season. All the other stuff, and the criticism, and the noise and the harshness of some of it, is just how it goes. It’s what we sign up for when you’re involved in this, and it’s OK. The point is that you stick together, and you find a way to get better in every kind of single area.”

Harbaugh then pointed to brighter possibilities on the horizon. If the Ravens reached 10-5 and earned a playoff berth in the face of offensive woes and injuries and fan angst, what might they do if a few of those difficulties fall away over the next few weeks?

“I’m excited about where we’re at because I feel that when we really get going, we can kick this thing into gear maybe at the right time,” he said.

Can the Ravens pull themselves together over a relatively short span to become a team that does more than hold off the likes of the floundering Falcons? They will need Jackson. They will need to stop breaking down in the red zone and start preventing opponents from scoring in the two-minute drill. They have a long way to go, yes, but they feel better for having fought this far.

“That’s just the Ravens standard,” tight end Mark Andrews said. “We know the standard that’s set here and how good of a team that this team can be. It’s just about reaching that full potential, looking at ourselves in the mirror, watching film and just getting better. Not being satisfied. Those are all of the things that we need to be doing.”

Justin Madubuike was ready for the responsibility of leading the defensive front.

Madubuike’s third NFL season set up as a pivotal chapter in his NFL career. The 2020 third-round draft pick flashed the quickness to become a serious interior playmaker in years one and two but only here and there. The Ravens craved more. Older teammates told him how good he could be and urged him not to settle.

The 293-pound defensive tackle was already on track for his best NFL season, but the Falcons game presented him an opportunity to show how far he has come. Atlanta came to town with one of the league’s most productive running games and two of its best blockers in guard Chris Lindstrom and tackle Kaleb McGary. The Ravens would take on this ground machine without Calais Campbell, their most dependable interior lineman and one of those veterans who had urged Madubuike to chase greatness.

Would Madubuike step into the breach? He answered with seven tackles, third most on the team, piling up bodies at the line of scrimmage on some plays, ranging wide on others and adding a sack for good measure.

“I’m going to tell you what: He’s been playing great all year, to be honest with you,” Harbaugh said. “He’s been dominant, really. He’s twitchy, fast, powerful. [Madubuike] played great. I thought our edge-setters played great. You know who those guys are. I could name them all.”

Madubuike and his young linemates, Travis Jones and Broderick Washington, performed admirably without Campbell to buoy them. The Ravens, also aided by a stellar, 15-tackle game from Pro Bowl linebacker Roquan Smith, prevented explosive runs and kept the Falcons out of the end zone.

Did Madubuike feel extra responsibility under the circumstances? “A little bit,” he said. “[Calais is] one of our best players. I know that as a defensive line, we wanted to step up. I thought we did that.”

Greg Roman gave the people what they wanted with a game plan straight out of the 1970s.

Fans spent the week gnashing their teeth at Roman, again, after he abandoned his efficient running game in the fourth quarter of the Ravens’ 13-3 loss to the Cleveland Browns. Roman subsequently acknowledged that he might have gone to a pass-heavy approach too quickly in hopes of changing tempos on the Browns.

The oft-pilloried offensive coordinator did not make the same mistake against the Falcons, leaning on his running attack to build a lead — 20 carries for 110 yards in the first half — and again to seal the game in the fourth quarter. When the Ravens needed to get off their own 2-yard line with 6:39 left in the game, they handed the ball to Gus Edwards, and he rumbled for 14. When they needed a first down to send them to victory formation, they handed it to Edwards twice more, and he picked up 11. Game over.

“Our physicality is what won that game,” Harbaugh said.

We know the Ravens lack premium wide receivers. We know their passing offense has been one of the least efficient in the league since Week 3. We know this means every game feels too close for comfort.

But we have learned, quite clearly, that Edwards and J.K. Dobbins are the most reliable and explosive elements remaining in their offense. This was certainly the case Saturday when they combined for 158 yards, more than half the team’s total, on 23 carries.

Dobbins sliced the Falcons up through the first three quarters, then Edwards powered them home. Roman did not turn away from the one formula everyone in the stadium knew would work. No one complained that Huntley completed just nine passes. The ratio was a winner.

The Ravens will become more multifaceted when Jackson returns. They will probably need more touchdown passes and third-down conversions to win playoff games. But on this frigid Christmas Eve, they committed to what was necessary.

Even on a day of jubilee, the Ravens didn’t click in the red zone.

Four red zone possessions equaled one touchdown and three field goals. The Ravens know it’s a math equation they will need to improve if they’re to make a legitimate Super Bowl run.

On their second drive of the game, the Ravens moved to the Atlanta 10-yard line when Huntley rolled right and found his newest wide receiver, Sammy Watkins, for a 40-yard gain. But a hasty first-down pass to Andrews cost the Ravens 3 yards, and Huntley scrambled instead of finding an open Isaiah Likely in the end zone on third-and-goal.

The Ravens owned the first quarter, averaging 6.5 yards per play to Atlanta’s 1.6. Once again, however, they came away with a skimpy 3-0 lead to show for it.

We saw it again at the start of the second quarter. Huntley connected with Andrews on a sweet 36-yard touch pass to the Falcons’ 15-yard line. But an ill-conceived quarterback keeper to the left side and a mistimed pass to Dobbins left the Ravens with another field goal.

Every little action, whether it’s a pass route or a block designed to spring a run, feels exponentially more challenging when this offense is confronted with a short field. That’s how you go eight straight quarters without a touchdown.

The Ravens finally broke the string when Huntley found Demarcus Robinson in a one-on-one matchup in the corner of the end zone just before halftime. The contested catch was the first touchdown by a Baltimore wide receiver since Week 3.

Was it enough to chase away the ghosts of red zone past that have haunted this team the last two months? Too early to say. The Ravens came away with another short field goal after a 37-yard burst by Edwards took them to Atlanta’s 9-yard line at the end of the third quarter. Huntley scrambled helplessly with no open target in sight on third-and-goal, leading fans to chant, “Fire Greg Roman!”

The Ravens’ defense has to stop giving ground at the end of halves.

The Ravens have one of the best defenses in football 90% of the time. In the last four minutes of halves, however, they have allowed more expected points per play than any other team in the league.

We saw this again Saturday when they stonewalled the Falcons on their first four possessions of the game, stuffing one of the league’s best running attacks for 29 yards on 11 carries. Ridder got the ball one more time with 2:23 left in the half, and all of a sudden, he looked like Joe Montana, completing five passes to take Atlanta to the cusp of the end zone. Only a sharp rush by safety Marcus Williams that forced an intentional grounding penalty saved the Ravens from giving up a touchdown.

We saw the same routine each of the previous four weeks, with the Ravens giving up points just before halftime in each case. Given their offensive struggles, these nicks — less showy than the fourth-quarter collapses early in the season — have loomed large.

“We’re not trying to play prevent defense, per se,” defensive coordinator Mike Macdonald said recently when asked about the late-half struggles. “It’s something that we have looked at, because it’s a situation that I think we need to improve on, in terms of our results. In terms of our process in those situations, I think we’re on the right track. We do game-plan it extensively, and when you look at the results on a per-drive basis, it’s hard to kind of pinpoint one or two things.”

Harbaugh agreed, saying he doesn’t see a pattern so much as a series of pivotal plays — penalties called and not called, great catches by opponents — that have gone against the Ravens. “You don’t want to overreact either,” he said. “You start overreacting, and then you start making mistakes by changing things you shouldn’t change. So, I’m not too worried about it, but all of our guys would like to see those stops.”