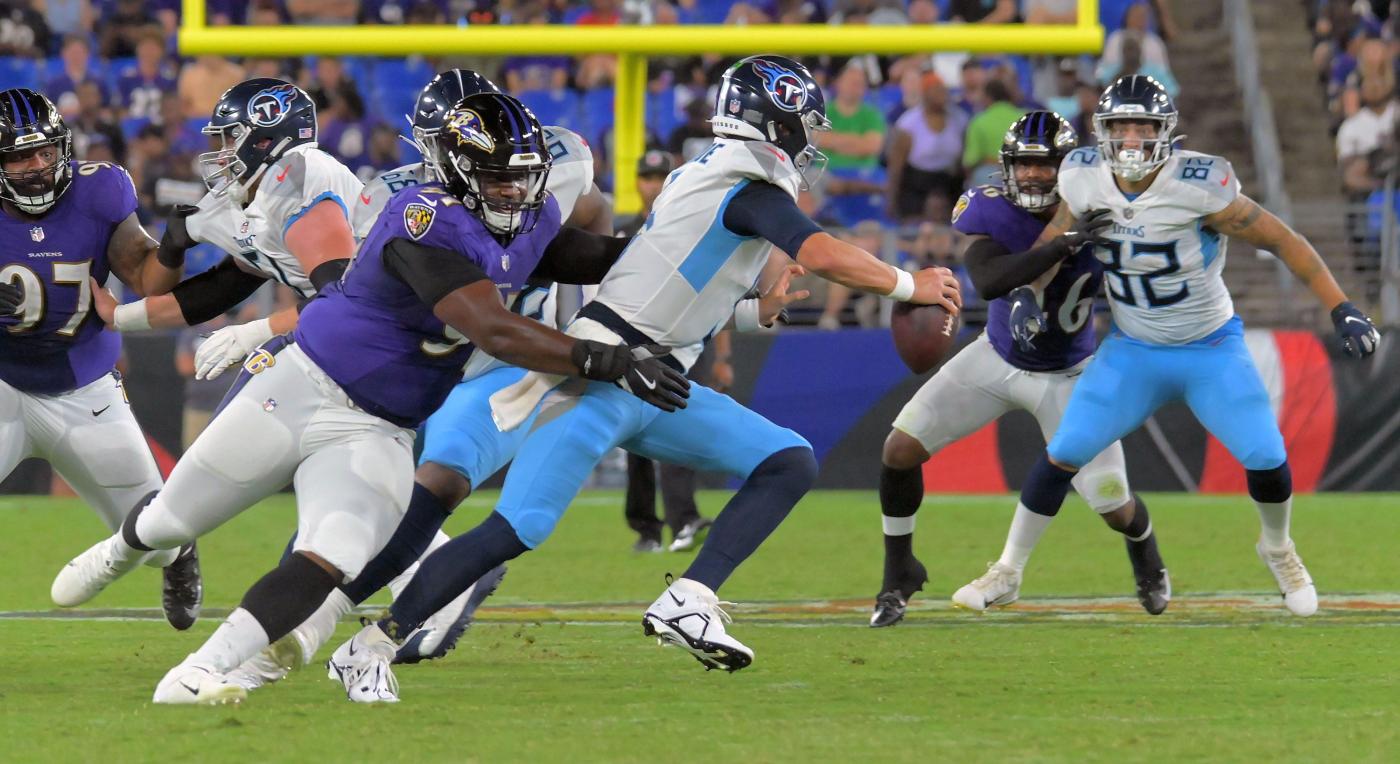 The Ravens, playing without most of their starters, extended their preseason winning streak to 21, led by a precise performance from backup quarterback Tyler Huntley and spectacular plays from rookie pass catchers Isaiah Likely and Shemar Bridges.

Here are five things we learned from Thursday night’s game:

After an uneven beginning to training camp, Tyler Huntley reminded us why he’s QB2.

Huntley isn’t facing competition for the No. 2 job after he started four games last season, but he has not thrown as sharply this training camp as he did last year, when he was battling Trace McSorley for a roster spot. Tendinitis in his throwing shoulder, which kept him out for a few days during mandatory minicamp, set him back, making it impossible for him to throw at home going into camp.

But Huntley looked like his 2021 self against the Titans, getting the ball out quickly and on target without taking many risks. He overthrew Tylan Wallace on third down with a Tennessee defender (who had badly beaten left tackle Ja’Wuan James) in his face. Otherwise, he didn’t make any bad throws, completing 16 of 18 for 110 yards and a touchdown as the Ravens built a 14-10 halftime lead.

“Tyler played great,” coach John Harbaugh said. “His numbers were off the charts. He ran the offense really well.”

Likely froze a Tennessee safety with a nifty fake and picked up a few extra yards for a first down to set up the Ravens’ first touchdown. In the second quarter, he ripped a pass away from Titans linebacker Chance Campbell, a Calvert Hall grad, for a 22-yard gain.

He also wiped out a pair of third-down conversions with holding penalties, but the Ravens will accept a few miscues if Likely (four catches on four targets for 44 yards) can be a dynamic target for Lamar Jackson.

“You come into your first game, there’s a lot of things happening at once,” said Likely, who described himself as a kid on Christmas morning. “There’s things I’ve got to clean up.”

Harbaugh joked that Likely needed the first juke he used on his initial first-down catch but “the next four were unnecessary.”

The rookie laughed. “My mind was racing,” he said.

Likely, a fourth-round pick out of Coastal Carolina, was the surprise offensive star of OTAs and mandatory minicamp, stringing together spectacular catches that demonstrated why draft analysts had labeled him a wide receiver in tight end’s clothing. Jackson called him a “baby Mark” Andrews.

At this point, it’s hard to imagine Likely not seeing the field regularly once the regular season starts. Jackson produced the best season of his career in 2019 when he regularly targeted three tight ends: Andrews, Nick Boyle and Hayden Hurst. Andrews was more a one-man show last season, when he was the league’s best tight end, but Likely has the talent to be a worthy running mate.

Bridges, an undrafted free agent out of Fort Valley State, has quietly made a case for himself since the start of training camp. He’s a smooth mover who uses every inch of his 6-foot-4 frame to fight for contested catches. He did exactly that at the end of the second quarter against Tennessee, reaching over his defender to pull in a 14-yard touchdown throw from Huntley. Bridges made another contested catch for 38 yards in the third quarter.

None of the Ravens’ top three projected receivers — Rashod Bateman, Devin Duvernay and James Proche II — is a lanky red-zone target. So if Bridges can maintain his early momentum, he might just give the Ravens a complementary piece.

“He’s a big, physical guy. He goes up and gets the ball,” Harbaugh said. “He plays hard on special teams in practice.”

Bridges would be a true wild card on the team’s roster after he caught 28 passes in just four games last season for Division II Fort Valley State, a historically Black university in Georgia. He had no Division I offers coming out of high school in Florida and has never played on a stage remotely as large as M&T Bank Stadium. He called the experience “a dream come true.”

“I feel like I’m a big receiver who can play big but also, I’m learning how to run routes and be flexible and versatile with my size,” he said. “I made some plays today, but there are definitely things I want to improve on, really just going back to the drawing board, learning from my mistakes, going hard on special teams, learning all the little things, blocking, all the little dirty work things to help me make the team.”

Sweet words to the coaches’ ears, no doubt.

The Ravens’ sloppy defense in the first half helped the Titans stay in the game.

We need to maintain some perspective given that exactly two projected starters, nose tackle Michael Pierce and outside linebacker Odafe Oweh (who played one snap), suited up for coordinator Mike Macdonald’s defense. Nonetheless, Macdonald could not have enjoyed watching the missed tackles, missed assignments and missed opportunities that set the Titans up for a pair of first-half scores.

Linebacker Malik Harrison forced a fumble to give his team the ball deep in Tennessee territory and helped get the Titans off the field on their next possession with an effective rush. But he missed two tackles on Tennessee’s first scoring drive.

First-round pick Kyle Hamilton took a poor angle and let Titans quarterback Malik Willis wiggle out of a compromised pocket for the 7-yard touchdown run on that possession.

Miscommunication between cornerback Kevon Seymour and safety Tony Jefferson left Titans wide receiver Racey McMath wide open for a 48-yard catch in the second quarter. In a bizarre visual, Seymour stopped running with McMath and shaded toward an empty sideline, where no receiver was standing. That play set up a field goal.

The defense came up with plenty of fine moments as well — a sack and several other pressures from veteran outside linebacker Steven Means, a sack from rookie defensive tackle Travis Jones, a late tackle for loss and interception from safety Geno Stone.

Harbaugh chose to look on the bright side: “Our defense on third down was amazing. Getting turnovers was good.”

We still don’t have a decisive leader in the running back competition.

Mike Davis started and was most effective running to the outside. He took advantage of a mauling down-block from right tackle Daniel Faalele and a nice seal from pulling left guard Tyre Phillips to score the first touchdown of the game.

It’s not necessarily telling that Davis got the first call Thursday. Coaches have said the running back competition is as wide-open as any in training camp. But the veteran free-agent addition probably is the safest bet to play behind J.K. Dobbins, who just returned to practice after missing last season because of a torn ACL. He has the chunkiest resume and the broadest base of skills.

Davis held serve with his performance (five carries for 22 yards) against the Titans, and none of the other aspirants took a huge step forward. Justice Hill and Tyler Badie, both strong candidates to make the roster as third-down backs, combined for 30 yards on nine carries. Nate McCrary, always a feisty runner, ripped off a 21-yard gain late in the third quarter, but we’ve seen him do that in past preseason games. Former Philadelphia Eagles and Dallas Cowboys backup Corey Clement, added to the roster the day before camp began, carried four times for 17 yards late in the game.

So the battle will roll on with Davis holding the high ground by a step.