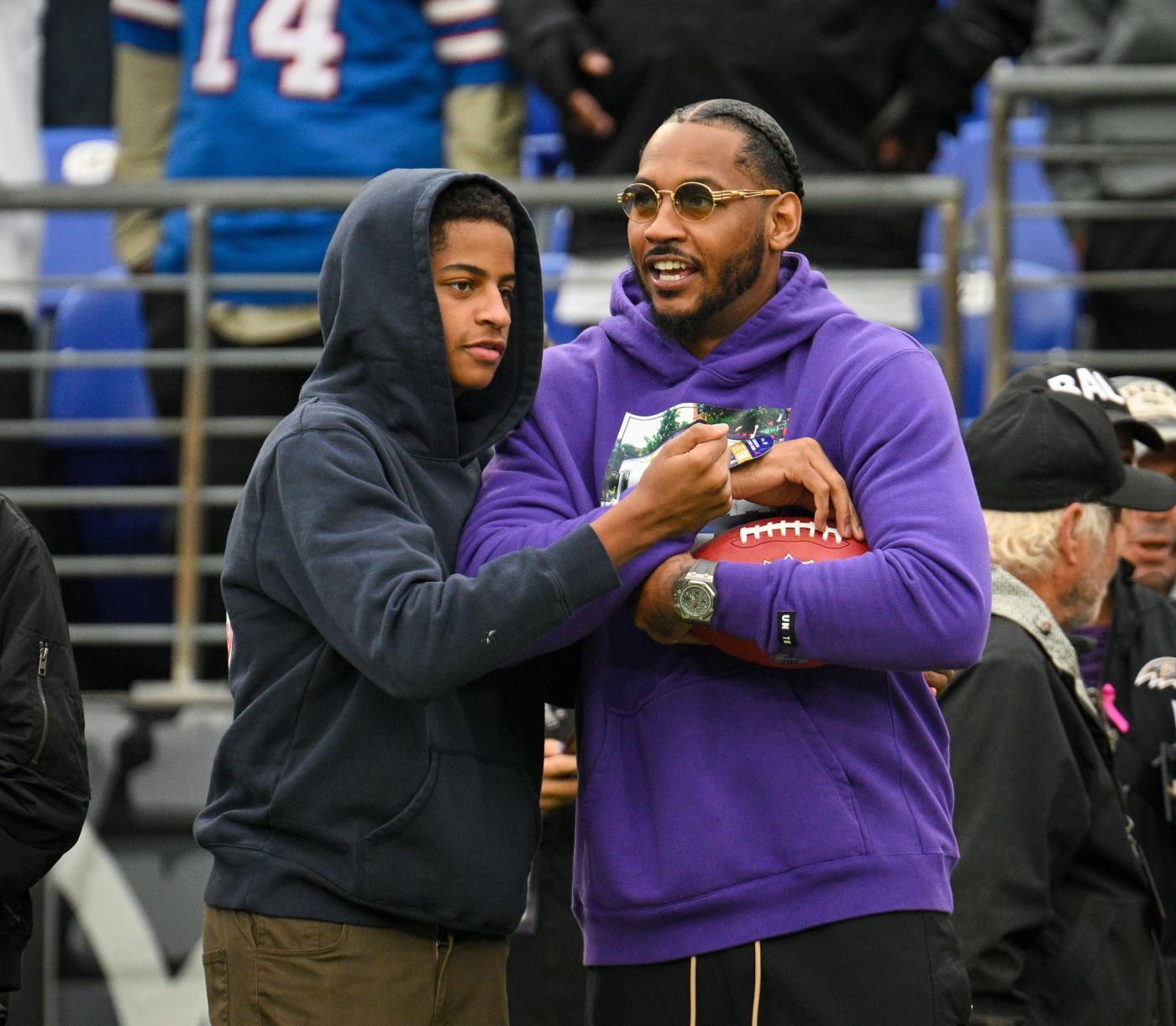 The Ravens went up 20-3 with 3:39 to go in the first half against the Buffalo Bills. They did not score the rest of the way as they let another game slip away in front of their home fans. They did not capitalize on opportunities to widen their margin and for the second time in three weeks, their defense did not hold with the game on the line.

Here are five things we learned from the Ravens’ 23-20 loss to Buffalo in Week 4:

The Ravens were a frustrated, confused team after they blew another lead at home.

Harbaugh went for a touchdown on fourth-and-goal from the 2 instead of asking Justin Tucker to kick a go-ahead 19-yard field goal with 4:15 left in the game. Wide receiver Devin Duvernay streaked open in the right corner of the end zone, but quarterback Lamar Jackson saw him too late and threw the ball into the arms of Bills safety Jordan Poyer.

With 80 yards to go, Buffalo quarterback Josh Allen — every bit as maddening to bring down as Jackson — bent the Ravens’ defense and then broke it with help from a misguided 15-yard roughing-the-passer call on a blitzing Brandon Stephens. The Ravens wanted to let the Bills score in the last two minutes so they would at least have the ball one more time, but they could not get that right either as linebacker Odafe Oweh went for a strip instead of letting Buffalo running back Devin Singletary cross the goal line untouched.

There’s plenty to unpack from the waning moments of this latest collapse.

Harbaugh opened himself to second-guessing by going for the touchdown instead of the easy field goal. It was roughly a 50-50 call, and he had every reason to believe his defense would struggle to keep the Bills from scoring at least three more points. He figured that worst case, Buffalo’s offense would be backed up on its 2-yard line. That turned out to be wrong because of Jackson’s interception. But Harbaugh was right to make an aggressive call. That’s his nature as a coach, and a three-point lead probably would not have held up.

“I like to attack,” tight end Mark Andrews said when asked about Harbaugh’s decision in the postgame locker room. “I like that he likes to attack too.”

More troubling perhaps was the seeming disconnect between coaches and Oweh on whether to let the Bills score. “Yes, it was,” Harbaugh said when asked if the plan was clearly communicated to the entire defense. Oweh, however, said “the call was either strip the ball or let him score,” and he was the lone player who tried to stop Singletary.

As defeat bore down on the Ravens, Peters erupted. He did not stick around to explain his reasons after the game, but Harbaugh did not seem concerned. “Emotions run high,” he said. “We’re on the same page, he and I. We have a great relationship; we have an honest relationship. I love him, I hope he still loves me. We’ll see.”

So what do we make of all this disarray from a team that could be 4-0 but instead stands 2-2? Are the Ravens a contender working out kinks or are they on the brink of coming apart?

Their best players dismissed the latter, darker possibility. Jackson noted that they also started 2-2 in 2019, when they won 12 straight to finish with the league’s best regular-season record. Defensive tackle Calais Campbell said Peters’ outburst did not indicate wider frustration sweeping the team: “No, not at all. We all just want to win.”

The Ravens sowed the seeds of their downfall with missed opportunities earlier in the game.

Jackson overthrew an open Andrews in the end zone at the start of the second quarter, a play that could have put the Ravens up 21-3. After an overzealous pass-interference call against Andrews and a Von Miller sack, the Ravens settled for a 42-yard field goal from Tucker. It was the first opportunity they failed to capitalize on, but not the last.

Patrick Queen dropped a potential interception that could have kept the Bills off the scoreboard in the two-minute drill. A week earlier, he dropped a possible pick-six in the red zone, so this is a streak he’d rather not continue. Allen found Isaiah McKenzie for a touchdown a few plays later to cut the lead to 20-10. The Ravens had controlled the ball more than 70% of the first half and had forced two turnovers, but their margin did not seem remotely comfortable against one of the league’s elite offenses.

“When we get those opportunities, we’ve got to capitalize,” said Queen, who took responsibility for his drop, part of another difficult day for the 2020 first-round draft pick.

After the Bills sent the Ravens off the field three-and-out to start the second half, a palpable uneasiness settled over the crowd at M&T Bank Stadium. Fans had watched the Ravens blow a 21-point lead in the fourth quarter two weeks earlier against the Miami Dolphins, and their grip was slipping yet again.

When the clock struck zero and the Ravens’ 20-3 lead from the first half was a distant memory, it was easy to focus on what went wrong at the very end. But as Queen acknowledged, their troubles began with lapses that did not seem so momentous when they occurred. Against a team as good as the Bills, they could not leave the door open, and they did.

Rashod Bateman is a tremendous talent, but the Ravens need more consistency from him.

Of the six balls thrown Bateman’s way, three skipped off his hands, an unacceptable percentage for the team’s No. 1 wide receiver.

Bateman’s most harmful drop came in the third quarter, when Jackson hit him in the hands, in stride, on a third-down play that might have ended in the end zone and would surely have extended a crucial drive. Instead, the Ravens punted, and the Bills marched 80 yards to a game-tying touchdown.

To be fair, this was a difficult day for every pass catcher on the field thanks to slick conditions created by the remnants of of Hurricane Ian. The Bills dropped plenty of Allen’s passes.

But we did not see Bateman the next time the Ravens had the ball, with the game hanging in the balance. We did not see him on their final drive.

He was moving uncomfortably after the game, so health might have been a factor in his absence. He declined an interview request. “I’ll have to go back and look at that,” Harbaugh said when asked why Bateman did not return to the game. “I’m not sure why.”

The Ravens cannot allow Bateman’s difficulties to fester. He came into the game averaging 28.3 yards per catch and is easily Jackson’s top downfield target. At his best, he extends to snatch the ball out of the air like no one else on the team. But reliability is just as important as brilliance for a No. 1 receiver.

Patrick Ricard has never been more important to the Ravens’ offense.

The football gods could not have designed a better day to showcase a 305-pound fullback. On a damp, gray afternoon with his team out to an early lead, Ricard was set up to be offensive coordinator Greg Roman’s medieval war hammer. He did his furious duty, flattening Buffalo’s world-class edge defenders with savage blocks, plowing forward as a ball carrier on third-and-short and dragging a defensive lineman on his back at the end of a catch.

Ricard’s statistical line is never going to blow us away, but the former defensive lineman has made himself into more than a battering ram. He finished the Bills game with three catches on three targets for 17 yards and one carry for 3 yards. He came into the game as Pro Football Focus’ top-graded fullback, and he’s playing more snaps than any of the team’s running backs, a sign of his overall importance to the offense.

Not to mention the delight he inspires in coaches and teammates when he rumbles through a properly executed passing route.

“He is extremely versatile, and he’s a very valuable part of our offense,” Roman said last week. “I can’t stress that enough.”

The Ravens need a winning streak and they need it now.

But there is a sunnier way to look at their position: They are 2-2 in a league ruled by parity, analytics measures such as Football Outsiders’ DVOA say they’re a top team and they in no way looked overmatched against Buffalo, the preseason Super Bowl favorite. With the Cincinnati Bengals and Cleveland Browns also at 2-2, they’re not staring up at anyone in the AFC North.

“I’m not looking at this like we have had a disappointing season,” Jackson said, and he’s right to suggest there’s no use in dwelling on the circumstances of their defeats or on the fact they could be, probably should be, undefeated.

But that line of thinking is only good for so long, and the Ravens will be on shakier ground if they do not make a push in the standings over the next three weeks, when they will host the Bengals and Browns sandwiched around a trip to face the so-so New York Giants. They’re playing better than Cincinnati and Cleveland, so now’s the time to bank home wins against their toughest divisional rivals.

Right now, we’re watching a team that could build on its positive traits — Jackson’s brilliance, all those turnovers from the defense, Tucker and Duvernay on special teams — or backslide toward the despair of last season. The rest of October will reveal the Ravens’ direction.