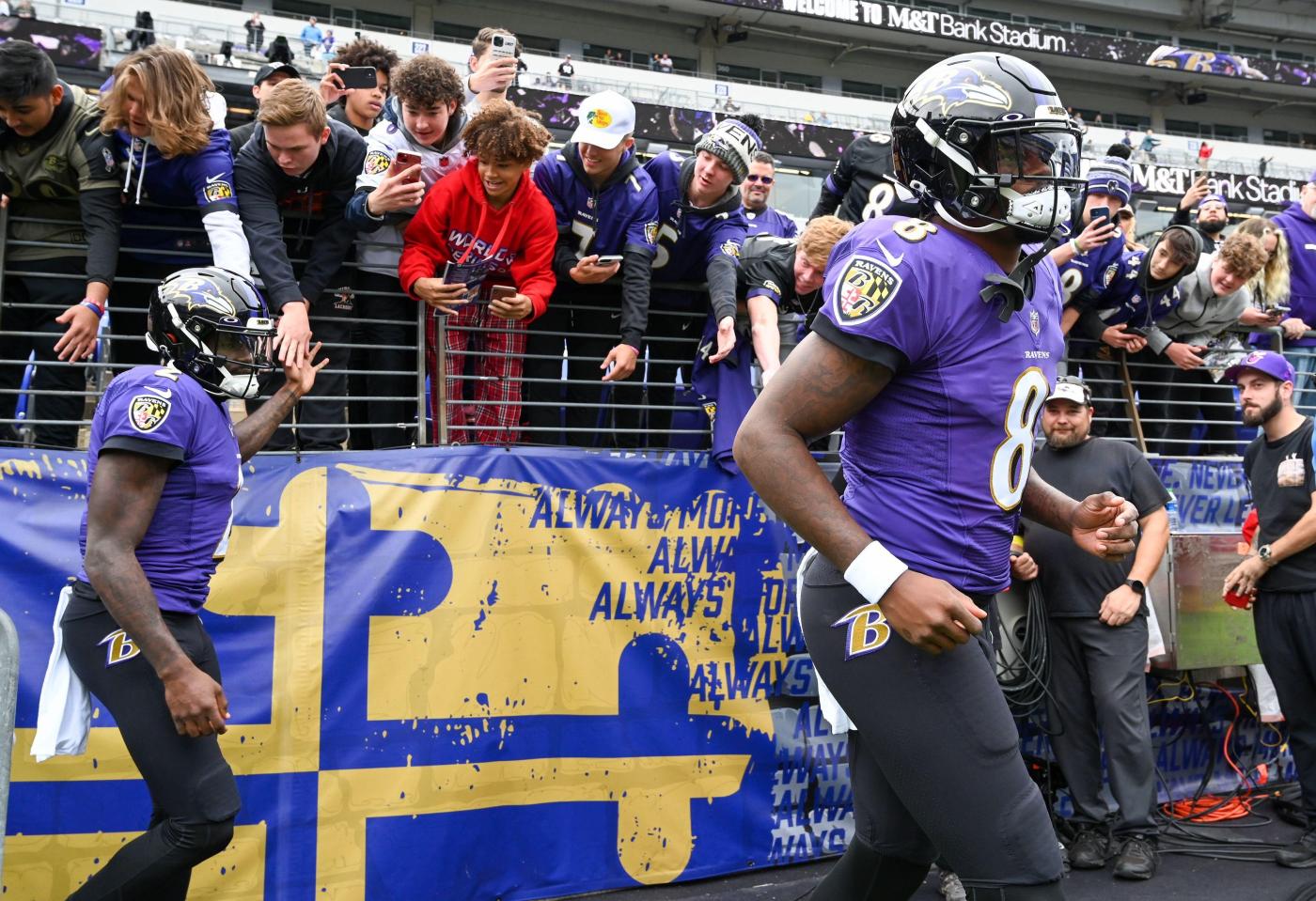 The Ravens keep finding new ways to make life difficult for themselves. This time, it was a fumble from running back Justice Hill after they drove deep into Cleveland Browns territory with a chance to go up six or 10 late in the fourth quarter. They escaped by the skin of their teeth when Malik Harrison blocked a 60-yard field goal attempt to preserve a 23-20 victory that was more about survivor’s grit than any kind of brilliant new direction.

Here are five things we learned from Sunday’s game:

The Ravens averted disaster but did little to chase away questions about their finishing kick.

How many times can we live through the same scenario without developing a collective ulcer?

Again, the Ravens built a double-digit lead in the fourth quarter. Again, their offense could not salt the game away as Hill coughed up the ball 16 yards from the Cleveland goal line. Again, their defense seemed in danger of melting at a critical juncture until Browns wide receiver Amari Cooper was called for pushing off cornerback Marcus Peters to negate a go-ahead touchdown.

“We had the lead again. What’s going to happen?” coach John Harbaugh said, acknowledging the anxious loop his team has inhabited through seven weeks of the 2022 season.

The Ravens extricated themselves on this tense Sunday, thanks to a blocked field goal attempt from Harrison (never was he so happy to be struck in the face by a football). Every win is precious in a league nearly devoid of sustained excellence. But of late, each Ravens triumph has felt more like a relieved exhale — the motion quarterback Lamar Jackson mimicked during his postgame news conference — than a statement of forward progress.

The Browns stumbled into this AFC North matchup, coming off a 38-15 thrashing on their home field at the hands of the New England Patriots. The middle of their defense was softer than scrambled eggs, and they had tossed away a string of close games in the fourth quarter.

But we have yet to see the Ravens dominate an opponent this season, and the Browns moved more efficiently than them, averaging 6 yards per play to the Ravens’ 4. Brilliant work on special teams, superior efficiency on third down and standout defensive plays — five sacks, five tackles for loss, three forced fumbles — saved them.

The Ravens hope they’re straightening out kinks by the week, even if their troubles seem to visit in a different form each time. “What we’ve been going through is just growing pains,” said outside linebacker Justin Houston, who returned from a groin injury to contribute two sacks.

But they need a no-doubt-about-it performance to break out of their cycle, and this was not it. As Jackson said: “I’d rather it not be close.”

The Ravens chose to grind rather than soar on a tough day for the offense.

Jackson’s passing line — 9-for-16, 120 yards, no touchdowns — was about as mundane as they come, continuing a difficult stretch that began with the Ravens’ Week 4 loss to the Buffalo Bills. He did not always sense incoming pressure and struggled to find open receivers even when granted sufficient time. The Browns swarmed tight end Mark Andrews, who made more impact as a short-yardage running threat than he did as a receiver.

Despite his paltry statistics, Jackson did not feel he lacked rhythm as a thrower. “We only threw the ball 16 times,” he said. “So I wouldn’t say bad rhythm. They made good plays; I got sacked on a couple. I had to get the ball out fast. … That’s just what it was.”

The Ravens ran 44 times out of 63 offensive plays, which Harbaugh described as a choice based on the flow of the game more than a pattern dictated by the Cleveland defense. “You’re just trying to win the game by any means necessary,” he said.

“Don’t think you didn’t win the game for us,” Harbaugh said he told Jackson after the game. “Because you did.”

Jackson did not turn the ball over and kept the Ravens moving with his usual clutch runs. He averaged 5.9 yards per carry on a day when the team averaged 3.6. Still, it’s difficult not to notice how much his production has tailed off since he threw for 749 yards and 10 touchdowns over the first three weeks of the season. He was not playing against the 1985 Chicago Bears; Patriots backup Bailey Zappe threw for 309 yards and a pair of touchdowns against the Browns in Week 6.

The Ravens will gladly take their grind-it-out victory and move on to planning for the Tampa Bay Buccaneers, but at some point, they’re going to have to break out of this aerial rut.

If you want to know why the Ravens rank first in special teams efficiency, this week was Exhibit 1.

Usually, kicker Justin Tucker is the lead actor, and he was perfect on three field goal attempts, including a dead-on 55-yarder in the fourth quarter to provide necessary breathing room.

This time, his partner Jordan Stout was just as good, flipping the field with a 69-yard punt in the second quarter and suffering a bit of bad luck in the closing minute when his 50-yarder just trickled into the end zone. The fourth-round draft pick from Penn State had not punted up to his own high expectations through the first six games of his career. This was more what he had in mind. “You just knew he was going to have a game like that,” Harbaugh said of the self-assured rookie.

And we can never forget returner supreme Devin Duvernay, who did a remarkable job waiting for his blockers and then picking his way along the sideline for a 46-yard punt return that handed the Ravens an easy three points in the second quarter. “The way he sets up blocks … he’s just amazing,” Harbaugh said.

We know how much time and money the Ravens put into weaponizing special teams. That investment won them this game.

Edwards, playing for the first time in 21 months, wasted no time marking the stat sheet as he carried the ball on the Ravens’ first three offensive snaps. He ran much as he did before he tore his ACL, LCL and hamstring, taking no extraneous steps as he pounded into the slivers of space available to him.

He would ultimately score both of the Ravens’ touchdowns — a no-frills hero in a no-frills game. “All that power,” Jackson said admiringly. “We’ve been missing that power, and it showed today.”

We sell Edwards short by not acknowledging his growth as an all-around runner over his first three seasons as a Raven. He became a threat to cut outside and pop off double-digit gains. But sledgehammer work was his original calling card, and as Jackson noted, the team does not have another back with Edwards’ skill set.

Edwards acknowledged the jagged path he traveled as he rehabilitated his knee through countless sessions in the cold tub and on the massage table. “It was up and down, up and down,” he said in his usual subdued tone.

Harbaugh hoped he would come back as the same blunt force. But “you never really know,” he said. “He looked good in practice; he looked like he was ready. We were patient with him, in terms of bringing him back, but until you get in a game it’s kind of hard to say.”

Twenty-one months after he last played in an NFL game, Edwards fought for the critical yards the Ravens needed to scrape through a divisional win. “He’s unique; he’s his own kind of guy,” Harbaugh said. “Every back has a different style, and Gus’ style is very valuable to us.”

We have overreacted to flashes from the 2020 first-round pick before, believing he had finally sorted himself out based on a sack here or a cluster of tackles there. But it’s difficult to remember Queen making as steady an impact as he has over the last three games.

Queen is usually best in attack mode, and he credited defensive coordinator Mike Macdonald with scheming up free lanes for him when he made consecutive tackles behind the line of scrimmage in the second quarter against Cleveland. Queen added a sack — he has 3 1/2 on the season — with a second-effort play and led the Ravens with 11 tackles overall.

To his credit, he did not overplay what he had done. “My confidence is definitely building, obviously, but it’s just a point of stacking and being consistent while doing that,” he said. “I feel like in the past it was I’d have a game like that, and then it would go down, then I would have another game like that, then it would go down. So, it’s just the point of being consistent with it now.”

Spoken like a player who understands the big picture of his career. Queen might not be the all-around middle linebacker the Ravens envisioned when they drafted him out of LSU, but when he’s firing into the backfield, he’s as capable of stringing together game-changing plays as anyone on the defense. Macdonald has a feel for how to use him, and we’re starting to see steady results.