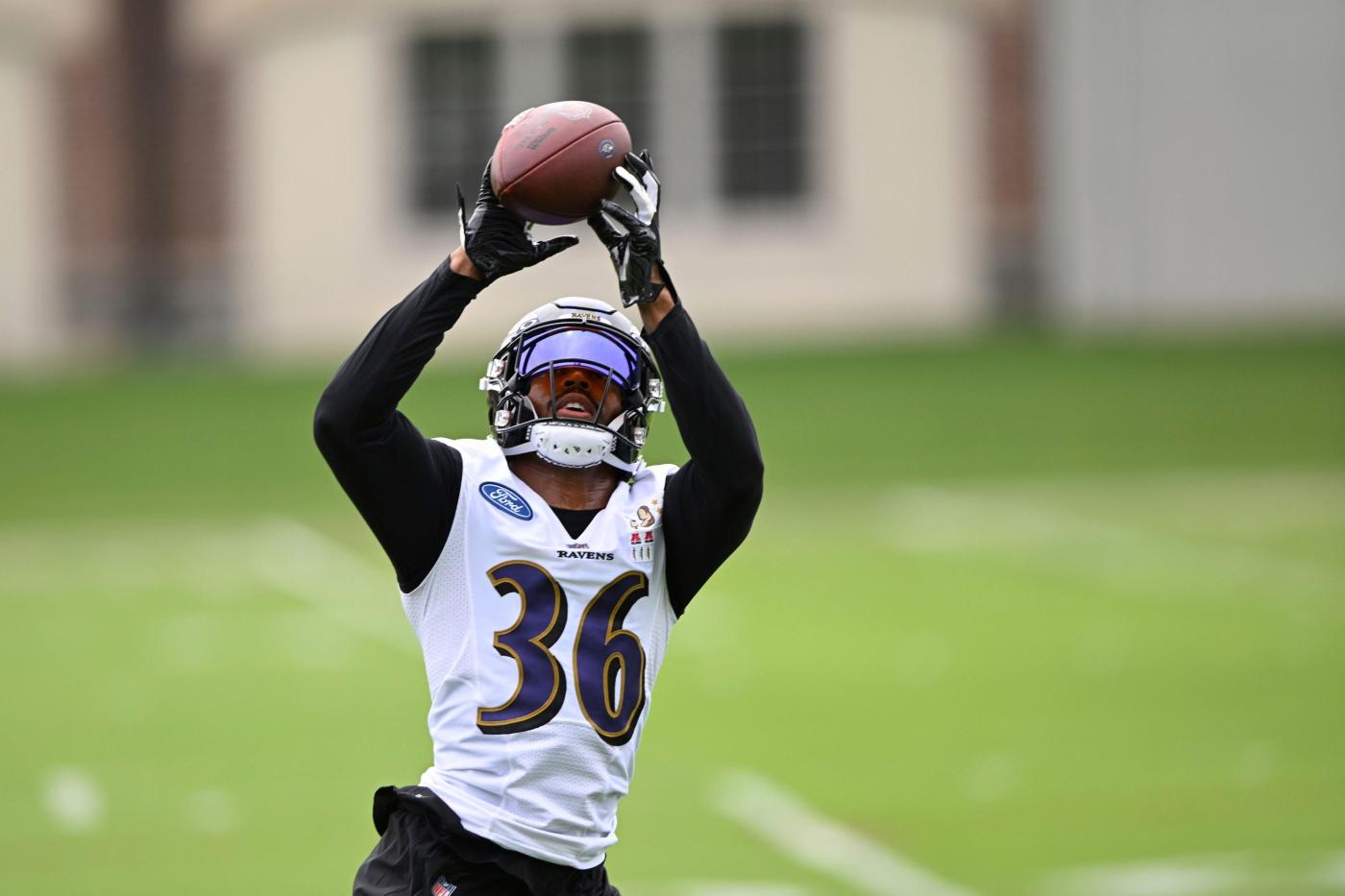 The 2021 Ravens no longer resembled the team they were designed to be over the last six weeks of the season.

We know they expect better in 2022, but with so many star players returning from serious injuries and turnover at other key spots, they will start the season with much to prove. With that in mind, here are five questions the team has yet to answer going into training camp:

We have seen Jackson’s buff physique and the zip he put on his throws during minicamp. We have heard him say he feels better than he did going into his 2019 Most Valuable Player season. But it’s fair to wonder how much he can produce with one of the league’s least accomplished pass catching corps.

Mark Andrews might be the best tight end in the world, so that’s a great start. But every other Jackson target will enter camp with a significant question to answer. Can Rashod Bateman build on flashes from last season and become a legitimate No. 1 wide receiver, something Marquise Brown never quite accomplished before the Ravens traded him in April? Can Devin Duvernay translate his explosiveness as a returner to his potential role as the team’s No. 2 receiver? Can James Proche II be the sure-handed threat on Sundays that he is during practice? Can Tylan Wallace become more than a special teams contributor? Can Nick Boyle’s body hold up after he looked trim and rejuvenated in summer workouts? Can fourth-round picks Isaiah Likely or Charlie Kolar produce in the No. 3 tight end role where Hayden Hurst thrived in 2019? Can a veteran free-agent addition help more consistently than Sammy Watkins did last season?

Those are a lot of what-ifs, no matter how optimistic we might be about individual players such as Bateman or Likely. We know the Ravens can move the ball without a typical No. 1 wide receiver; their 2019 offense was the league’s most efficient with no pass catcher surpassing 852 yards. But is that their direction? Or are they hoping for more of a hybrid of their league-best running attacks from 2019 and 2020 and the aggressive passing offense Jackson led early last season?

With national analysts already pinpointing pass catching as the Ravens’ weakness, no aspect of the team will be more scrutinized during camp and the early weeks of the season.

Will their efforts to revamp the offensive line pay off?

Even before the Ravens’ late-season losing streak, their offense had stagnated in large part because Jackson no longer seemed confident in the pocket. He either took sacks or rushed throws, looking nothing like the MVP candidate who carried his team through the season’s early weeks.

The Ravens responded by signing one of the league’s most reliable right tackles, Morgan Moses, and drafting a new starting center, Tyler Linderbaum, in the first round. We’re already penciling these new additions in beside right guard Kevin Zeitler, the team’s most dependable blocker in 2021. But so much still depends on the condition of left tackle Ronnie Stanley’s surgically repaired ankle. In retrospect, the Ravens’ outlook for 2021 dimmed as soon as Stanley took the field for Week 1 clearly not healthy enough to meet his All-Pro standard. His ensuing absence set off a chain reaction that never stopped as the Ravens surrendered 57 sacks, second most in the league. We’ve heard only optimism from Stanley and team officials, but until he holds up over an entire regular season game, doubts will linger. A few preseason snaps will not do the trick after we went through the same waiting game last year.

For all their investments in the offensive line, the Ravens still do not have a good alternate answer if Stanley cannot go. Ja’Wuan James would be the next man up, but he’s played three games since 2018, and his best NFL work came at right tackle. We know Patrick Mekari is ready and willing, but he’s best as a high-end utility lineman. The Ravens invested $98.75 million in Stanley because he was the best pass blocker in football. You don’t casually replace such a talent. And we have not even touched on the ongoing uncertainty at left guard, where no one has seized the starting job. The guess here is that Tyre Phillips will line up for Week 1 given his physical advantages over Ben Powers and the disappointing progress of 2021 third-round pick Ben Cleveland. Between that position battle and the nervous anticipation for Stanley’s return, there’s much we still don’t know about the men who will protect Jackson.

Who’s rushing from the edge in Week 1?

The Ravens did not have an outstanding pass rush last season, but they’d probably be happy if they could trot out most of the same group for Week 1. That’s how thin they are because of injuries, uncertainty over which veterans might join the fold and the death of Jaylon Ferguson.

Odafe Oweh proved he was more than a freak athlete, making several enormous clutch plays and rolling up 27 pressures as a rookie. Given his seriousness of purpose, he and the Ravens expect a significant step forward. But what’s the next sentence in our outlook for this position group?

Tyus Bowser, the team’s most versatile outside linebacker, will probably be back at some point this season, but it’s a lot to ask for him to be 100% percent in Week 1, about eight months after he tore his Achilles. Second-round pick David Ojabo is working to come back from the same injury, probably in the second half of the season if all goes well.

The Ravens created a little certainty beside Oweh when they re-signed veteran Justin Houston in early July. Houston is no longer an elite sack threat, but he played well for the Ravens at a modest cost, so his return, on another one-year deal, was welcome. The Ravens have flirted with another veteran, Jason Pierre-Paul, and they could find snaps for both him and Houston. In fact, such a platoon would be ideal.

There’s a version of this story in which the Ravens end up with a solid group by November. But there’s a bleaker timeline in which we might not see the best of Bowser or Ojabo this season and in which the Ravens do not find the right veteran to work beside Oweh. With this position group, training camp will tell only part of the story.

Are the running backs back?

We have treated it as a fait accompli that the Ravens will have their real backfield for all of 2022. They had it for none of last season after J.K. Dobbins and Gus Edwards tore knee ligaments before the first snap, setting off a mad scramble to dig up veteran stand-ins. Devonta Freeman and Latavius Murray produced some decent moments, but the dynamism was gone. The team’s per-carry average dropped from a superb 5.5 yards to a merely good 4.8 yards.

Though coach John Harbaugh has spoken optimistically about Dobbins and Edwards, both will start training camp on the physically-unable-to-perform list. Serious knee injuries always create uncertainty, especially at a position that demands so many quick-twitch stops and starts. Adrian Peterson and Dalvin Cook came back from ACL tears better than ever. Todd Gurley did not.

The Ravens signed veteran Mike Davis as insurance. They like sixth-round pick Tyler Badie, who stood out in minicamp. But as with Stanley on the offensive line and Marcus Peters in the secondary, their plan at running back is predicated on good health news for returning stars. Every person at the team facility will be eager for a glimpse of Dobbins and Edwards at full go.

Will Chuck Clark be on the team, and if he’s not, who will call defensive signals?

As soon as the Ravens used their first pick on Kyle Hamilton, speculation turned to Clark’s future with the team. You don’t draft the best safety in the class to stick him on the bench, and they had already spent $70 million to lock in Marcus Williams as their cover specialist on the back end. Clark handled the situation with exemplary professionalism, working hard in OTAs and minicamp. But the Ravens, aware of the uncomfortable questions that would come his way, did not put him on the podium for a media session.

In the short term, the roster is better with Clark on it. He’s a durable, versatile safety who will be able to play plenty of snaps beside Hamilton and Williams in defensive coordinator Mike Macdonald’s system. He’s also insurance against the injuries that have frequently ravaged the team’s secondary. The Ravens should not race to trade him for a middle- or lower-round pick, though it’s understandable why they might accommodate Clark, a stand-up character, if he’s eager to move on.

If they do move him, it’s not clear who would don the green dot as the defensive signal caller. The Ravens prefer the duty go to a player who’s on the field for almost every snap. Would they look to Williams in his first season in Baltimore? Or linebacker Patrick Queen, who performed better after the Ravens took responsibilities off his plate last year? It’s not the most crucial decision the Ravens will make over the next six weeks, but avoiding the question is another reason they would benefit from keeping Clark.