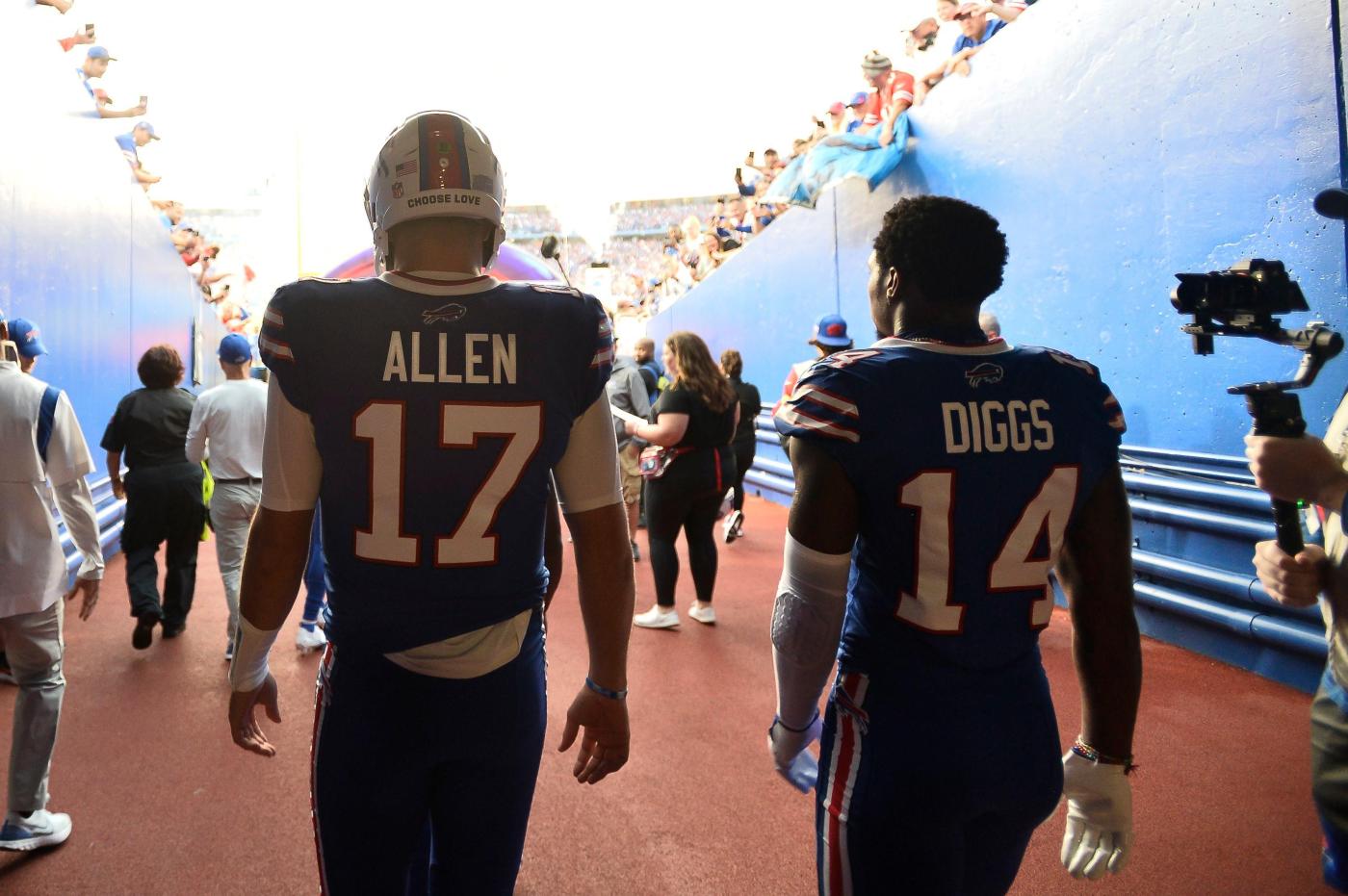 1. Pick a guy, let it fly. That was Dan Marino’s line and it should be Tua Tagovailoa’s Sunday. Due to injury, the Bills start two rookies at cornerback and two sixth-round picks with one combined start between them at safety. Tua Tagovailoa, Tyreek Hill and Jaylen White should be able to find places to pick on again this week. The Bills are without three-fourths of their starting secondary with 2021 All-Pro safety Jordan Poyer and second-time Pro Bowl safety Micah Hyde joining 2019 All-Pro cornerback Tre’davious White on the injury list. Hyde is out for the year. Poyer and Hyde combined for 10 interceptions last year, the most of any safety tandem. In their place are two sixth-round picks with one career start combined in Jaquan Johnson and Damar Hamlin. Hamlin has no starts and 78 defensive snaps over the past two years. Rookies Christian Benford and Kaiir Elam will start at cornerback. You don’t think the Dolphins passing game is salivating? Mike McDaniel should be able to create mismatches considering there are three reserves to go at. Tua threw against two fourth-round rookies last week in Baltimore. Now instead of throwing at veteran stars he’s going against bit players. There will be chances assuming …

2. Terron Armstead’s toe holds up. The Bills are also without two defensive tackles in Ed Oliver and Jordan Phillips. The middle of the Dolphins line should hold up fine. Armstead hasn’t practiced this week with a toe issue but is expected to play. He’s needed to block Von Miller, assuming the Bills don’t shuffle him to the other side to go at right tackle Greg Little. Last week, Little played as well as injured starter Austin Jackson. The Bills have a good pass rush with Miller and Greg Rousseau on the edges (though Rousseau moved inside at times last week). But a great Bills defense that’s given up a total of 17 points through two games is hurt by injury.

3. Contain Josh Allen. The Dolphins should be able to score, considering their firepower and the Bills missing five defensive players. The question is if Allen goes off on the Dolphins defense like Lamar Jackson did for three quarters last Sunday. Does a pass rush emerge? Allen can run with power where Jackson did with flash. He also can throw the ball and his offense put up 31 points at the Los Angeles Rams and 41 against Tennessee. You’re not going to stop Allen. But the idea is to not let him have the kind of game that can win the day. That means …

4. The Dolphins cornerbacks have to hold up. Xavien Howard didn’t practice with a groin issue this week, even though the idea was he should play. They need him because even with undrafted rookie Kader Kohou playing well for injured Byron Jones at the other corner, the Bills receivers are dangerous. Stefon Diggs and Gabe Davis make as imposing a receiving tandem as Hill and Waddle.

5. Depth. How deep are these teams? In the heat, with their injuries, this will be a big test for a Buffalo team that started its rebuild a couple of years before the Dolphins and has been a contender the past two seasons. The Dolphins have had a jillion draft picks in recent years to build up their depth. It’s early in the season to have to depend on it, but a 1 p.m. kickoff in September demands everyone play.

Prediction: Dolphins 34, Bills 31. I’ve added some more points from a mid-week prediction due to the injuries. At home, riding confidence and given the state of the Bills secondary, I think the Dolphins come out 3-0.