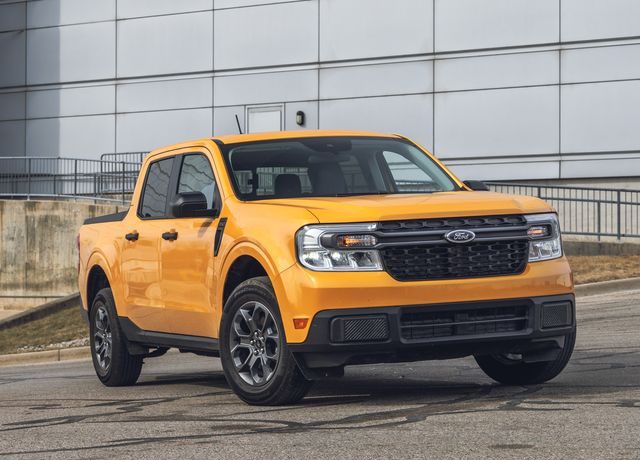 In 2022 Ford launched a new truck called the Maverick. With a starting price just below $20k, the Maverick is a smaller and less expensive option than the Ford Ranger. Rather than being built on a Ranger chassis, the Maverick is actually built on the Bronco Sport chassis. Less capable than the Ranger, the Maverick is built for people who need a truck but don’t need the power and towing capacity found in the Ranger or bigger F-150. The extremely affordable price point of the Maverick has caused the truck to sell out extremely quickly, with no 2022 models left available to order.

With a naturally aspirated 2.5L engine, and an optional upgrade to the 2.0 EcoBoost, how capable is the new Ford Maverick? This guide is going to discuss the Maverick’s performance, towing capacity, performance potential, and more. We will compare the standard 2.5L engine against the upgraded 2.0L engine for those debating which engine is right for them.

The standard Maverick engine is a 2.5L naturally-aspirated Duratec engine that combines a small electric motor, making it a hybrid powertrain. Interestingly enough, the standard 2.5L Duratec only comes in front-wheel drive. With how small the Maverick is, there likely isn’t enough rear weight for a rear-wheel drive configuration. The standard 2.5L produces a combined 191hp and 173lb-ft. of torque.

Overall, Maverick performance with the larger but naturally aspirated Duratec is quite weak. However, upgrading to the EcoBoost gives it a significant performance bump as 250hp is quite stout for a truck this small. Additionally, the AWD benefit helps improve towing and offroading capabilities. The Duratec Maverick is likely best kept on paved roads whereas the AWD EcoBoost version can handle tougher terrain that you’d expect a truck to be capable of handling.

The Maverick might not come loaded with performance and power from the factory, but what about performance modifications? Since the Duratec engine is naturally aspirated it is going to be quite limited in terms of power and tuning potential. You can likely throw some basic mods on it like an intake, exhaust, and tune and see a bit of a power pickup. However, it is going to be very limited in terms of power potential due to its naturally aspirated configuration.

On the other hand, the EcoBoost engine option allows for big horsepower improvements. A few simple 2.0 EcoBoost mods can take the Ford Maverick over 300whp. A simple intake, tune, and downpipe can supply nearly 70whp for the cost of about $1,500.

Overall, the upgraded 2.0 EcoBoost Maverick is the winner in both performance and tuning potential. If you are concerned about power output, choose the EcoBoost and put a couple of simple bolt-on mods on the engine and you will have a fast and powerful truck.

The standard towing capacity on a base model Maverick is 2,000lbs. with a 1,500lb. payload capacity. This is totally fine for towing a small trailer with lawn care or work equipment in it. This makes the Maverick a great affordable work truck for people who need a truck bed and some minor towing capabilities. However, 2,000lbs. is certainly limited.

When you upgrade to the AWD and 2.0L options, towing capacity increases to 4,000lbs. This is still nearly half of the Ranger’s 7,500lb. towing capacity and about 1/3 of the F150’s 13,000lbs. However, it is good enough for work equipment, jet skis, a small boat, and most small campers. Therefore, unless you are towing a big boat or a massive camper, you really don’t need anything more than the Maverick offers.

Overall, the EcoBoost is again the clear winner for towing needs in the Maverick.

Where the 2.0L EcoBoost doesn’t win is in fuel economy. The Maverick is great for commuting or as a work truck because the hybrid 2.5L Duratec gets crazy gas mileage. With a combined 37mpg EPA rating, you aren’t going to find better fuel economy in any truck, regardless of its size. This is thanks to the hybrid design with the electric motor.

While the EcoBoost wins in towing and performance, it does so at a cost. The cost is a combined 25mpg, which is 12mpg lower than the Duratec engine option. 25mpg still isn’t bad for a truck, but it is a big hit to fuel economy if you don’t need the extra power and towing capacity offered by the 2.0L.

At the end of the day, it depends on what you need the Maverick for. If you don’t ever tow anything and don’t mind a truck that is a dog entering the highway, then get the gas savings offered by the hybrid. If you need the power and towing, then you will have to sacrifice fuel economy. However, the 2.0L still gets better fuel economy than the Ranger and F150, for what it’s worth.

The Maverick is a great truck for anyone that needs a truck, but also wants fuel economy and is on a budget. Starting at less than $20k, the top Lariat trim fully optioned out will still only run you in the low-30s.

Performance and towing capacity are sacrificed for the combined 37mpg you get with the 2.5L engine option. Additionally, functionality is also somewhat limited by the front-wheel-drive configuration. However, upgrading to the AWD and 2.0L package gives the Maverick a big improvement with respect to power, performance, and functionality.

While the 2.0L engine sacrifices fuel economy, it doubles the towing capacity and adds about 60hp. Additionally, the turbocharged nature of the 2.0L engine makes it extremely capable of handling additional power with simple performance upgrades and modifications. Performance is not an issue with the upgraded engine option, whereas it can be with the standard 2.5L.