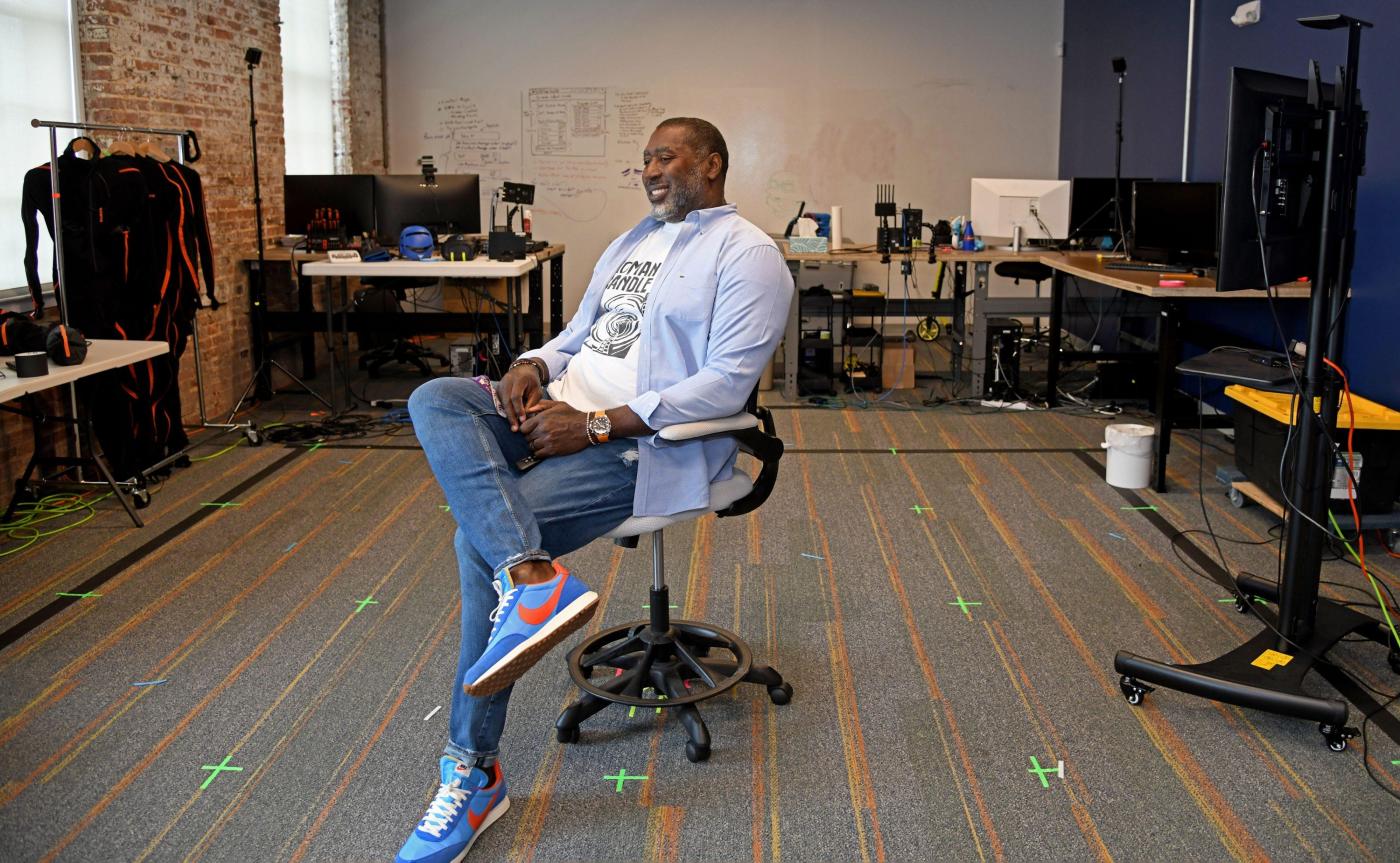 A century or more ago, Baltimore artists created, drew and produced beautiful images within the solid walls of the Hoen lithography plant on Biddle Street on the east side.

The headquarters of the producer of detailed maps, colorful canning labels and Maryland rye whiskey labels closed 40 years ago and fell vacant. Trees sprouted in its decomposing walls. It was a six-alarm fire waiting to happen.

“It was an absolute disaster,” said Trevor Pryce, 46, the former Ravens defensive lineman who has leased a considerable portion of the old high-end printing plant, redeveloped by Cross Street Partners, for his live animation business, the Outlook Company.

Pryce, who grew up in central Florida, attended the University of Michigan and graduated from Clemson University, and played 14 seasons in the NFL. He founded a record label, Outlook Music Company, in 2001 while playing for the Denver Broncos.

He settled permanently in Baltimore, first in Columbia and now in Reisterstown, after his two daughters and son graduated from McDonogh School. He liked the education they received and decided to put down roots here after he left the NFL.

After visiting 20th Century Fox in 2005, he became enthralled with visual media and computer animation.

He was soon focusing his creativity into the Kulipari series, now a Netflix show. And Kulipari is now produced in East Baltimore, at Chester and Biddle streets.

“We are becoming the first company of our kind in this part of the world,” Pryce said. “The closest similar operation is PBS Kids in northern Virginia with its ‘Curious George.’”

His Kulipari, an Australian Outback aboriginal word for poison, is set in the Amphibilands, a secluded community of tree frogs. Kulipari began as a Simon & Schuster book and made the jump to an animated series.

His digital action animation was once located on Mosher Street in a Maryland Institute College of Art building in Bolton Hill. He outgrew that space and found his current new space in East Baltimore in a neighborhood that suits Pryce.

“Th vacants are starting to becoming high-end town houses,” he said. “My goal is to turn it into a Burbank. There is room for it here.”

Burbank, California, is the home to the major players in animation.

He now has 62 people on his payroll and envisions his operation spreading to other 19th century, formerly moribund structures scattered north of the Johns Hopkins medical campus.

He sees it as becoming a “major virtual production studio for the East Coast.”

Cross Street Partners call the effort a “transformative redevelopment project will continue the ongoing revitalization of East Baltimore by repurposing an underutilized warehouse building on a blighted urban block into a nexus of opportunity.”

“This is eventually,” he said. “In time, people in the industry will come to Baltimore.”

He recently showed his current studio to a summer youth group from the neighborhood adjacent to his studio.

“Until you see it on your own, with your own eyes, you don’t really know what we do,” he said. “If you were a kid of a similar age in Burbank, California, you would know all about it. The industry is there and you’d have a cousin or friend working in it.”

He wants to share his world of creativity and video action to East Baltimore.

“I can have an impact in this city,” he said.

The day those children saw his artists at their screens — and recognized they were making another part of the Kulipari series, one of them told him, “This is the coolest place in Baltimore.”