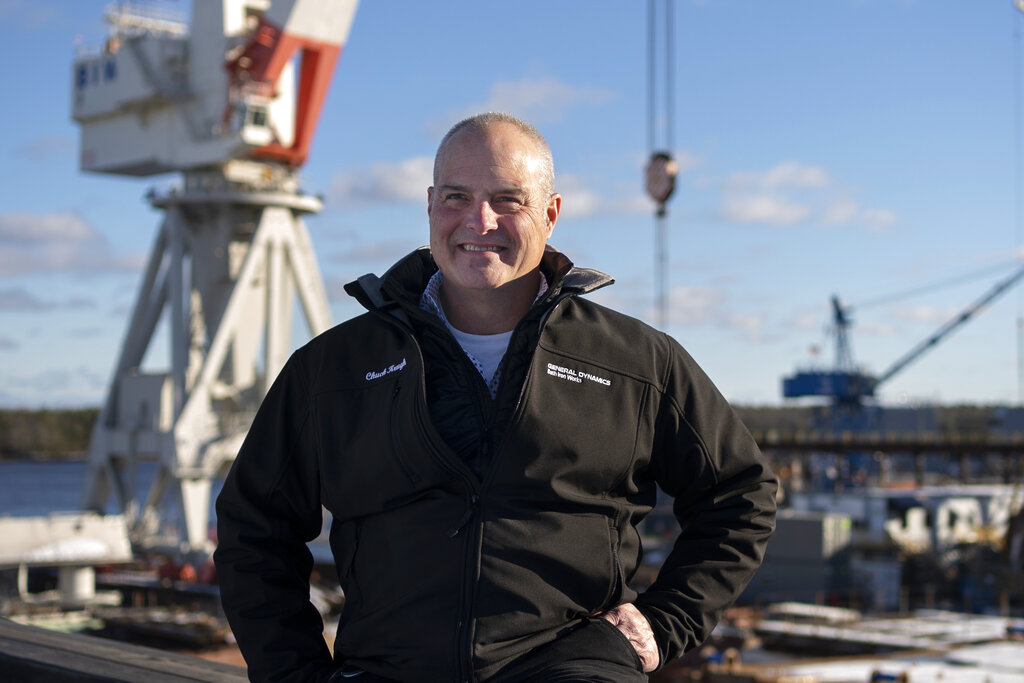 Charles “Chuck” Krugh said he wasted no time in getting his hands dirty, meeting daily with workers on the ships’ “deck plates.”

“I’m a hands-on guy that likes to get into the details,” he said.

Shipbuilders weren’t so sure at first whether it was just an act, but after six months they’re now accustomed to him regularly chatting with shipbuilders to get a handle on their workflow, at all hours of the day and night.

Labor relations have improved along the way.

“It’s all been good. We’re moving in the right direction. We’ve just got to keep moving that way,” said Rock Grenier, president of Local S6 of the Machinists Union, which represents production workers.

Krugh, 58, arrived in June after the abrupt departure of former Bath Iron Works President Dirk Lesko, who led the General Dynamics subsidiary through a difficult period that included a pandemic and a two-month strike.

The future USS Carl M. Levin that completed acceptance trials this month is more than a year behind schedule. The silver lining, Krugh said, is that the warship earned the highest marks for a Bath-built ship in years in a review by the Navy’s Board of Inspection and Survey.

Krugh said he’s encouraging the shipyard’s 7,000 workers to rethink processes to ensure they can complete tasks as efficiently as possible. A big part of that is ensuring proper planning before a task even starts.

“We show people that you can do the impossible, or the seemingly impossible, if you spend enough preparation time to get things ready. So that’s the good news side of what we’re doing, and we’re seeing a momentum building now,” he said.

The Army veteran formerly served at Gulfstream, another General Dynamics subsidiary, which builds business jets, before being tasked with overseeing a historic shipyard that dates to the late 1800s.

The future isn’t assured for the shipyard beyond the current decade unless the shipyard continues to become more competitive,  said Loren Thompson, a defense analyst at the Lexington Institute. Bath Iron Works competes with the larger Ingalls Shipbuilding in Mississippi for contracts to build Navy destroyers.

“It is imperative for the union and management to get along because if they don’t, the long-term consequences for the yard could be fatal,” he said.

As for Krugh, he said some mistakenly suggested he’d struggle with the transition from aerospace to shipbuilding.

“This is really personal for me. This is our country. We don’t build mixers here. We’re building the warships that are going to protect my family, your family and other Americans,” he said.