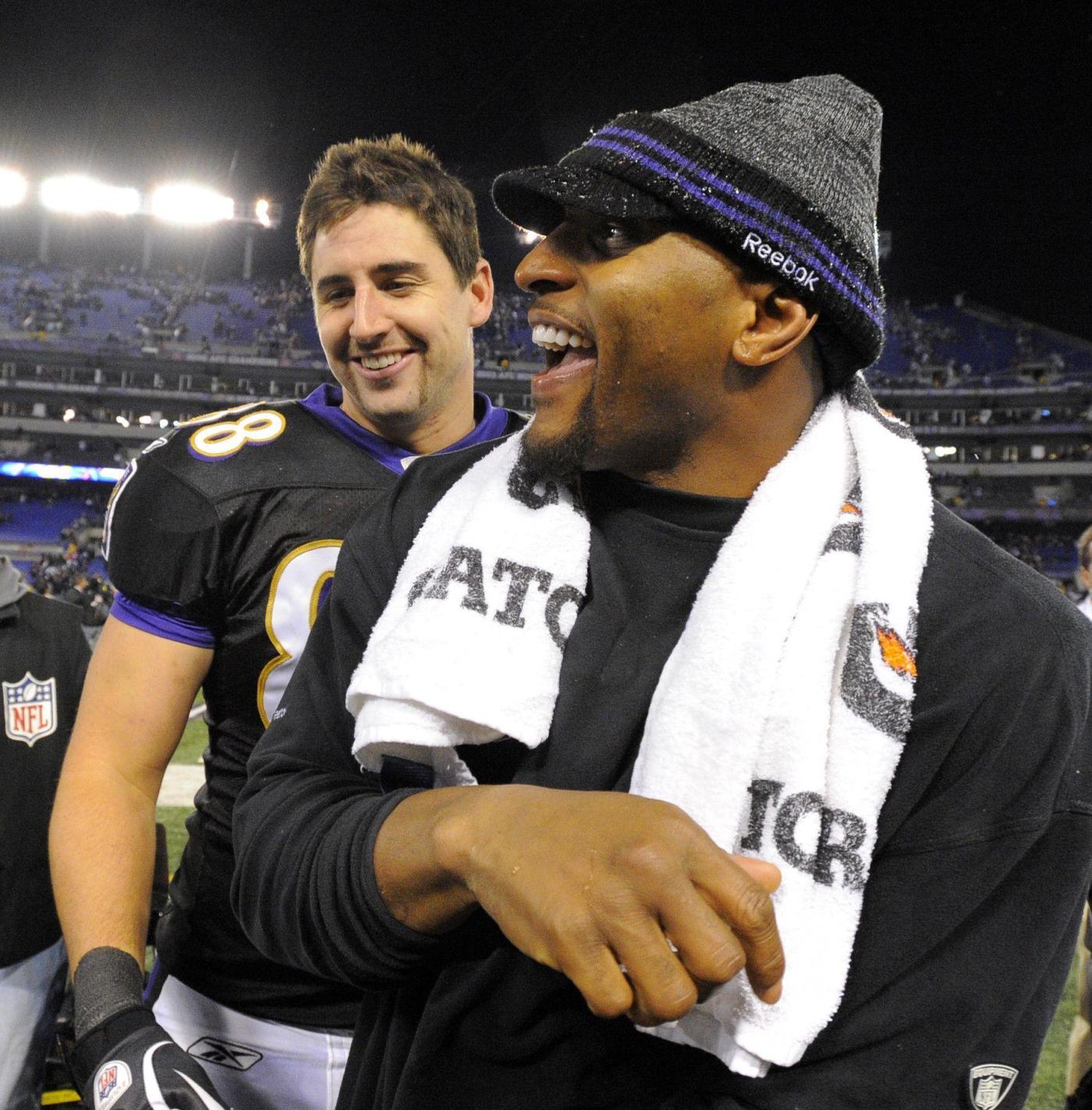 Does the 47-year-old man, who subjected his body to hundreds of bone-rattling collisions a year, look forward to pulling himself off the couch on a random Tuesday?

Does he feel pleasure when he dons skintight polyester instead of the old battle armor and rolls off on his custom bicycle with 50 miles of open road in his immediate future?

These questions are beside the point. “It’s an addiction,” Ray Lewis said.

A decade after his last snaps for the Ravens, the Hall of Fame linebacker constructs his days not around the sport he mastered, but around the one he used to replace it. He was a football player. He is a cyclist.

Lewis’ obsession is just one example of the fitness lifestyles former Ravens have embraced as they try to keep off the pounds and remain vital in a world beyond the game.

‘Tis the season of diet cleanses, exercise regimens and vows to drop unhealthy habits for a new year. But for NFL players, the reckoning often comes when helmets and shoulder pads are set aside for good.

These men have spent their adult years living by strict weekly schedules that make them swift, strong and vigorous enough to survive three hours of combat on Sunday afternoons. When that structure vanishes, the results are not always good. They have all heard sad stories of former teammates and opponents who carry unhealthy amounts of weight or struggle to get around the house because of persistent pain. These dangers lurk when they’re still young by the world’s standards; the average NFL career lasts less than four years.

“We would have conversations all the time in the locker room about past players; I was aware that I did not want to retire and let myself go,” former tight end Dennis Pitta said. “It’s always difficult when you retire from football, because your whole life has been working out. Your career ends and now, you have none of those responsibilities. So it’s completely on you. … It’s a whole new world for us retired guys that a lot of guys probably struggle initially to navigate.”

The NFL Players Association was concerned enough about the issue that in 2013, it launched The Trust, a sweeping post-career wellness program that includes customized fitness and diet consultations for union members. NFLPA executive director DeMaurice Smith has said his goal is to help players “get more out of football than football gets out of them.”

Only a handful of Ravens from the team that won the Super Bowl 10 years ago remain active in the NFL, so most alumni have had to contemplate how to stay healthy in a world without football. When they gathered for a reunion in October, they did not all show up in familiar shapes and sizes. Formerly sleek wide receivers carried a little extra around the middle, while ex-300-pound linemen were unrecognizably trim.

Those who embraced the gospel of post-NFL fitness took quite different paths.

Lewis threw himself into cycling as fervently as he’d hurled his body at NFL running backs.

Pitta had to stop playing in 2017 after a third major surgery to his right hip, so he could not rely on an exercise plan that would subject his leg to repetitive pounding. He turned to intermittent fasting, dropping more than 30 pounds from his playing weight of 245.

Pro Bowl guard Marshal Yanda feared the strain he would put on his heart if he remained at 305 pounds. He stepped away from the game on his own terms following the 2019 season and quickly replaced weightlifting and running with family walks and bike rides on gravel paths around his Iowa home. He’s about 50 pounds lighter and routinely inspires double takes when former teammates encounter him. “He looks 20 years younger,” his college coach, Kirk Ferentz, marveled.

“The fun part of working with them post-career is that when they’re playing their sport, you have to be very specific. But once they retire, it’s a great opportunity to work on literally everything, to unravel all those bad habits they needed to excel in their sport,” said Rebecca Schumer, a program specialist for MedStar Health Physical Therapy who has worked with Ravens players. “They can move so much better. That’s the biggest thing once they retire is mobility. They’re so tight in certain areas when they’re playing.”

She’s seen football players who can bench-press 500 pounds but can’t balance on a basic exercise ball. So activities like cycling, which require unfamiliar motions but don’t stress the joints, are good fits for these young retirees.

Yanda, 38, enjoys the jokes from old teammates, who love to say they could push him around in his current state, but his motivation for losing weight was deadly serious. He built his career on good habits, pushing himself to lift more weight every offseason, striving to practice perfectly even when he did not feel like it. So he applied the same discipline to retired life.

“Once you’re wired that way — it drives my wife crazy, because I get a little intense — it’s how you shape your life,” he explained. “You’re either doing something to be proactive, or you’re probably going to be putting on weight, and then I’m not going to be here as long for my family. If I’m 300 pounds for the rest of my life, one of the No. 1 killers is heart disease, so I’m shortening my life because my heart is not going to be able to take it.”

Before he moved from Baltimore in May 2020, he developed a routine of riding his exercise bike in the morning, then taking a walk with his family in the evening. No running, no weightlifting; his joints took enough pounding over 13 NFL seasons. Yanda adopted a diet given to him by one of his former strength coaches and when he returned to Iowa, began exploring his home state’s secluded roads on his bike. He lost 60 pounds and felt 10 years younger.

“I’m human. I’ve crept back up to 255, because I was helping my dad with harvest and not working out as much,” he said. “But it’s like, man, I feel this good, and I know what the recipe is, so that’s also what reinforces the habit of staying at that weight.”

After Pitta, 37, finished rehabilitating from his third hip surgery, he became a deep student of nutrition, something he rarely thought about as a young athlete burning thousands of calories a week in practices and workouts. He listened to podcasts, read books and articles, and concluded that simply not eating in the morning or within three or four hours of bedtime would be his best path.

The Orange County, California, resident still lifts weights a few times a week, plays golf and jumps into an occasional basketball game, but he relies on diet more than exercise. “For me, the most sustainable thing was intermittent fasting,” he said. “Just kind of tightening the window when I eat during the day. That and just kind of knowing what to avoid. There’s so much processed food and things that, growing up, you didn’t know were that bad for you.”

His playing weight, when he still worried about blocking 280-pound defensive ends, fluctuated between 245 and 250. Post-career, he dropped as low as 212 at the height of his intermittent fasting, a way to manage weight and prevent some forms of disease, according to Johns Hopkins Medicine. Now, he’s content at 225 pounds.

“You just want to be able to feel good, after all the injuries you sustained and the toll football took on your body,” Pitta said.

Lewis, the oldest player on the 2012 Ravens, did not worry about falling out of shape. He always hated seeing retired athletes with soft bellies, chiding them, “You going to let it go like this?”

“For me, it never changed,” he said recently from his Florida home. “My goal is to stay at peak performance. I live by a saying: ‘If you stay ready, you don’t have to get ready.’”

But he needed to find a new conduit for his famous work ethic. He had tried wrestling, kickboxing, yoga. He’d largely sworn off red meat in favor of fish. He first jumped on a bike at the suggestion of a friend after he injured his toe during the 2011 season. He was fascinated by how difficult the unfamiliar motions felt.

Lewis hooked up with cyclist Zack Morris, who fed him drills and training cycles that become central to his daily existence. “I get up and do all my business in the morning,” he said. “In the evening, and my family knows it, I’m training, so don’t mess with me.”

Lewis is so hooked that he stashes bicycles with friends and business partners in the cities he visits most frequently. When he’s in Maryland, for example, he loves riding along the rolling roads near his home in Hunt Valley. His next frontier is Colorado — all those mountains to conquer. If he can’t get outside, he’s on his Peloton. Five days a week, 40 or more miles a day, and he hovers right around his former playing weight of 240 pounds.

“Oh my God, it’s night and day,” he said, comparing how good he feels now with how he felt when he was playing. “If the Lord blesses me and says I make it to 100, I’ll probably be riding a bike when I’m 100.”