Frustrations continue on Mass and Cass in Boston 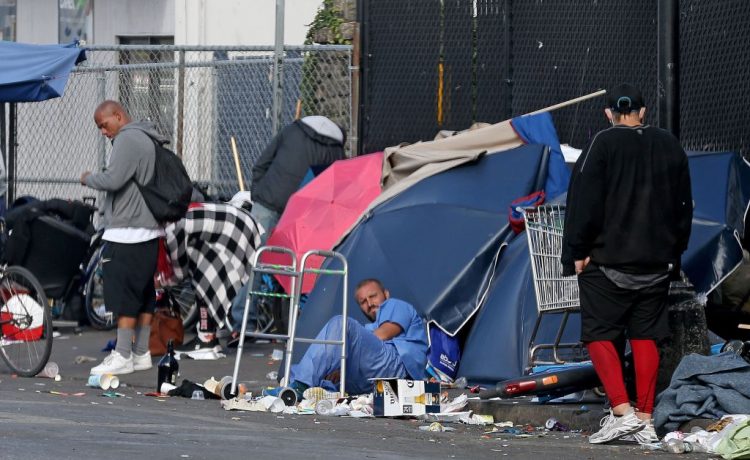 The churn along Mass and Cass continues, with large crowds still present and a double-sided Sisyphean struggle between people trying to erect tent-esque structures made from umbrellas, tarps and the like, and the city crews charged with taking them down.

Basically, those who spend time working on the area say, it’s the same old same old, a treadmill of despair that’s not getting much better — if any.

“Oh, hell no,” activist Domingos DaRosa said when asked whether it seems like anything’s improving. Anything the powers that be are saying about the situation, he said, is “lipstick on a pig” until more “law and order” is put into effect.

The troubled area continues to see what locals estimate to be about 125 to 150 people there on a given day, down from highs in the 100s last year, though still with many people easily visible selling, buying and consuming drugs.

The last big government action down here just south of the intersection of Massachusetts Avenue and Melnea Cass Boulevard — the roads that give it the Mass and Cass moniker, one activists and the city have sought to use rather than the more uncomplimentary “Methadone Mile” it’s also known as — was back in January, when the Wu administration went block by block, clearing out the dozens upon dozens of tents people had put up along the sidewalks in the area.

Though some activists opposed the move and said people should be able to live there if they want, the operation to get people off the streets and into various types of shelter was received largely — an early win for the nascent administration of Mayor Michelle Wu.

Now, though, more than half a year later, and with the area not catching the same headlines it did throughout last summer, fall and winter, people who live in the area say the conditions again have worsened.

Sue Sullivan, of the Newmarket Business Improvement District created last year in the area, said the BID’s private security gets called to Newmarket Pizza 15 to 20 times a day — and McDonald’s and the gas station there even more.

“We couldn’t believe how many new people were out there today,” Sullivan, whose organization represents the businesses, but also works with the homeless to try to clean up the area. She said she knows many of the people who are normally out on the streets, but is seeing more and more unfamiliar faces.

“It’s getting worse,” she said. And while “it is in no way, shape or form worse” than it was last year, “it’s more violent, and more people are coming in from outside of Boston,” and it’ll stay that way until the open-air drug market there is pushed out.

And now some tents are back — kind of. Some people on the streets do try to put up tents, but those are quickly removed, as they have been since January, when the city began its anti-tent push.

But now, “They’re trying to take tarps and umbrellas and skirt the system” with DIY tent-style configurations. Those, in the gray area, tend to stay up a bit longer, though the city cleaning crews do come through every couple of days, move everyone off the block of Southampton where people congregate, and pick up whatever’s left behind.

George Stergios of the nearby Worcester Square Area Neighborhood Association said the key to displacing the drug trade there is going to be “making it as uncomfortable to be down here” as it is in other communities.

“Right now it’s a sanctuary, right?” he said. “You’re doing the same old thing and you’re going to have the same old results.”