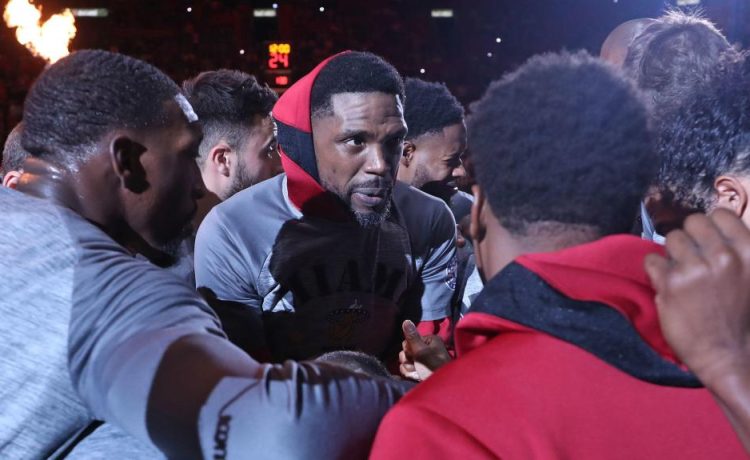 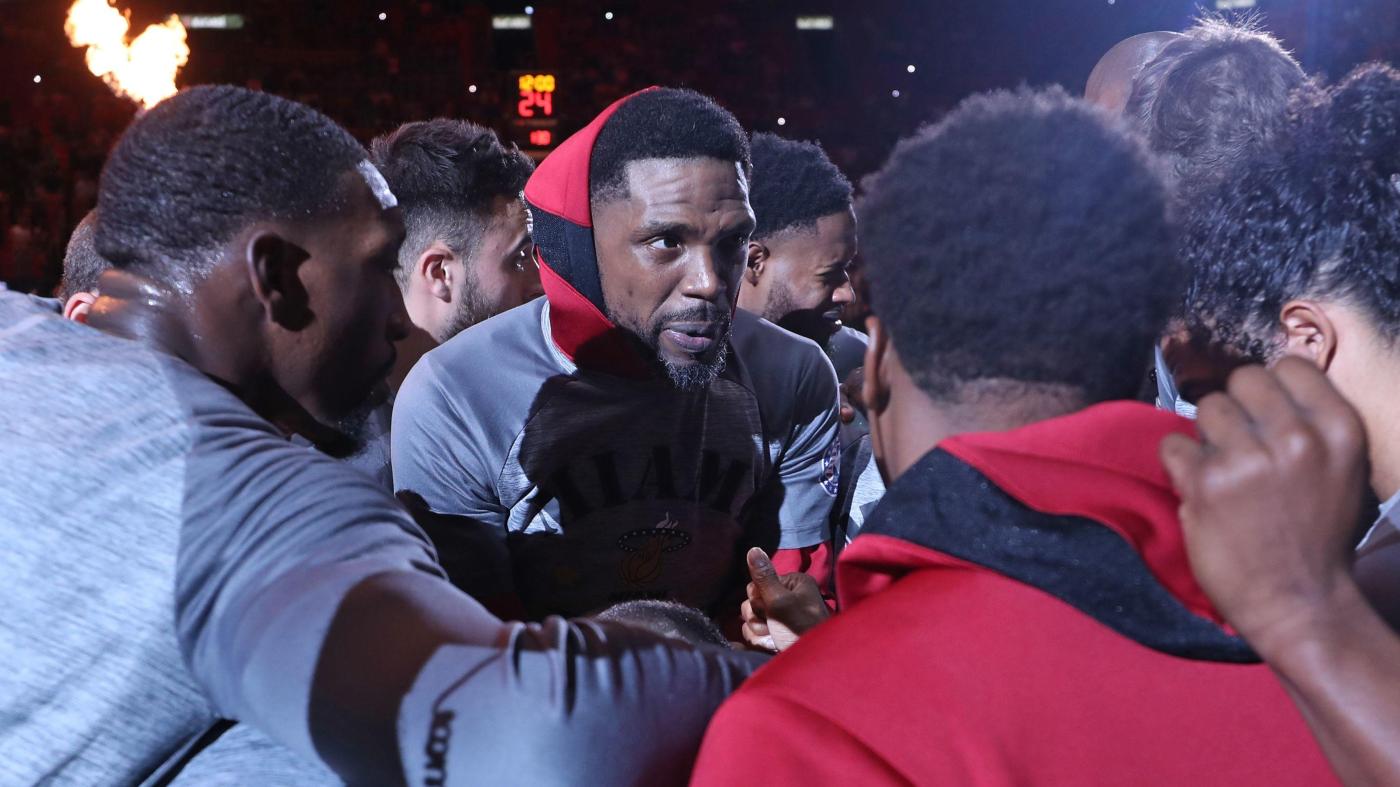 This was not an interview Udonis Haslem wanted to be having, making that clear immediately.

What has happened with FTX, the failed cryptocurrency exchange, and the ensuing charges filed against FTX founder Sam Bankman-Fried hit home for the Miami Heat captain far more than in the pocketbook.

“He’s not a good person,” Haslem said this past week. “That’s just it.”

Yes, Haslem served as a spokesman for FTX, in commercials played both during Heat broadcasts and at FTX Arena.

But what he was fronting, in his view, were many of the elements that have made him a South Florida icon, with FTX initially approaching him from a philanthropic perspective, to help Haslem further his community initiatives.

“I’m not ashamed of any involvement. I came in with pure intentions,” he said as the Heat pushed through their four-game trip. “My point of it was, ‘You guys are doing a lot for charity. You’re in Miami now. What can you do for my city?’ And that was the stance that I took and we got some stuff done.

In many ways, Haslem viewed the FTX ties the same way as the Miami-Dade and the Heat themselves did, a benefactor willing to provide a payoff that could resonate civically — as well as in the pocketbook.

“He did what he did and he got to pay the price,” Haslem said of Bankman-Fried. “He made decisions that affected a lot of people. I got a chance to meet a lot of those young kids that had relocated and packed their stuff up and came from wherever they were to move to Miami and put their hopes and dreams behind what FTX offered. Now these kids are in Miami starting all over again.

“Those are the people I feel sorry for.”

Bankman-Fried’s arrest came in the Bahamas, where he had set up shop. That, too, resonated with Haslem, with the Heat having held their preseason training camp in Nassau.

“I have a very large amount of contacts in the Bahamas, family members, just people that I’m close to,” Haslem said. “What they were doing for those islands and the people that were benefiting, those were the people that I was excited about and those are the things that I’m heartbroken about, because those people don’t have those opportunities anymore.”

Unlike athletes who invested with FTX, Haslem’s involvement was promotional.

“I got gypped out of $15 million,” he said. “That’s what my equity had grown to. He didn’t dupe me. I signed a contract with a company and that’s part of it.

“A lot of people got hurt, and that’s where I feel sad.”

Haslem said he was aware of the risk/reward element.

“I didn’t put no money in; I took it in equity,” he said. “I feel bad for the people that were hurt and lost money and really got caught up in that foolishness. But at the end of the day, I came in pure.

For the Heat, for Miami-Dade, for Haslem, is an unfortunate chapter not of their own making, but of a web of deceit with tentacles far beyond South Florida and the NBA.

“The good name of Udonis Haslem is not tarnished,” Haslem said “it was just linked.

“I was someone who got hired, with the best of intentions.”

QUALITY CONTROL: No, the Oklahoma City Thunder were not pleased with the officiating on the final sequence of their Wednesday night home loss to the Heat, contending guard Shai Gilgeous-Alexander was fouled by Caleb Martin on his tying attempt. But there also was grace from coach Mark Daigneault, considering the officiating crew on hand. “Here’s what I’ll say about that, in all honesty,” Daigneault said in his postgame media session. “Ed [Malloy], Brent [Barnaky], Leon [Wood], those guys have done 3,000 career games, over, and they’ve done 175 playoff games. And we do not get crews like that. That’s probably the most experienced, seasoned, trustworthy crew that we’ve had all year, and it’s one of the most trustworthy crews, experienced crews that we’ve had in two years. And I’m not going to complain about them one bit, because we’ll take a crew of that experience level every night. We’ll take them again Friday, we’ll take them again Saturday. They’re always going to miss plays, but you can’t replace having a steady hand on the game.” The game ended with Thunder guard Josh Giddey prone on the court, believing he, too, was fouled on a putback attempt. It turns out the NBA officiating report said Gilgeous-Alexander wasn’t fouled, but Giddey was.

RESPECT PAID: Seemingly every time he got a switch on a pick-and-roll in his Indiana Pacers’ loss Monday night to the Heat, emerging guard Tyrese Haliburton found himself defended by Heat center Bam Adebayo. It resulted in a one-point, 0-for-9 night from the field, with the Heat’s Martin often taking the primary defensive assignment. “They got a lot of guys who are really talented defensively,” Haliburton said. “The Martin twin, Bam, Jimmy [Butler], Kyle [Lowry], they got four or five guys on the floor at all times who can guard the ball really well. It wasn’t a successful game for me overall, and that’s just what Bam does.” Haliburton didn’t stop there, calling Heat coach Erik Spoelstra “a genius.” The teams meet for the third time this season on Friday night in Miami, with the four-game season series that concludes Feb. 8 in Miami tied 1-1.

CROWDER TIME: The latest update on the fate of former Heat forward Jae Crowder, who has been away from the Phoenix Suns since the preseason while awaiting a trade, was addressed by Sam Garvin, the Suns interim managing governor in the wake of the impending sale by disgraced owner Robert Sarver. Of Crowder, who has been linked to a potential trade to the Heat, Garvin told the Arizona Republic that the ball remains in the court of Suns President James Jones, the former Heat forward. “I think Jae is a good player,” Garvin said. “Removing myself from my prior roles of vice chairman of the Suns, just as a fan, I’ve always been a fan of Jae Crowder. I love his tenacity, I love his passion and I think he’s going to do well in the right situation with the right team. The arrangement that he’s not coming in, but getting paid was worked out by James. I know James and his team . . . they’ve had a lot of discussions with a lot of teams that are interested in Jae. As James said, there’s no magic wand of a timeline. It’s going to happen when it’s going to happen, but I think Jae is going to go somewhere and do well and I think we’re going to get value for Jae.”

HISTORICAL PERSPECTIVE: Count Spoelstra as a fan of the NBA renaming its postseason awards for such league icons as Michael Jordan, Hakeem Olajuwon, Wilt Chamberlain, John Havlicek, George Mikan and Jerry West. “It’s pretty cool,” he said. “I think you’re able to acknowledge the history and keep evolving, because the history continues to change. And I think the current players will be able to respect that, gives it some different meaning. And, look, the history of the game is one of the most special things about this Association. The part I enjoy the most is the current generation showing the proper respect and admiration of the previous stars.”

9-1. Spoelstra record for Heat on coach’s challenges this season. Opposing coaches are 10-2 on such officiating challenges.