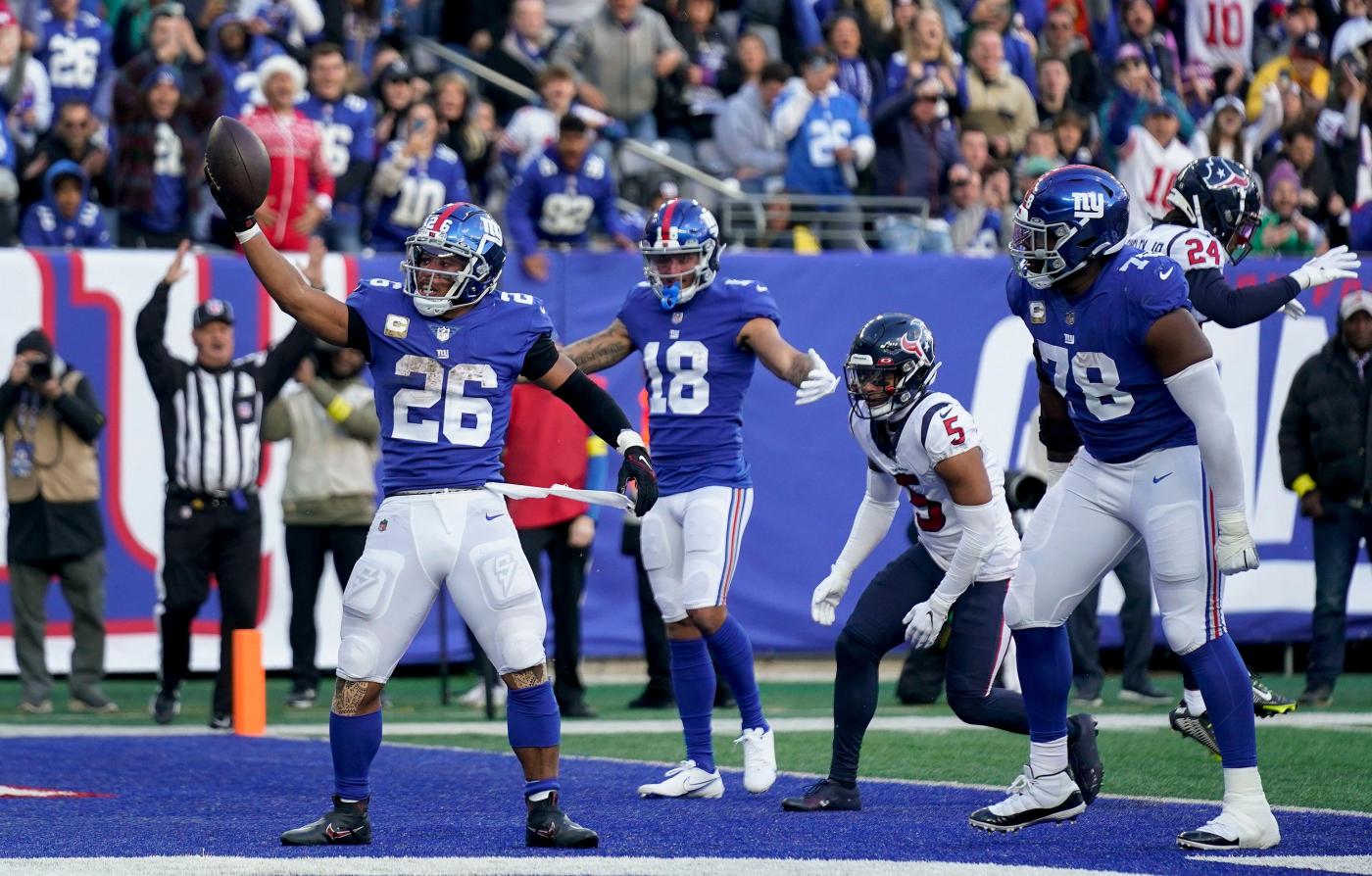 The win vaulted the Giants (7-2) into second place in the NFC East once the Dallas Cowboys (6-3) fell in overtime to the Green Bay Packers.

“It was a challenge, honestly,” Love said of pushing through McKinney’s absence. “Guys are put into different roles and positions. It was a grind of a week. We really wanted to get on top of things. It wasn’t perfect. But guys stepped up.”

Two Daniel Jones touchdown passes and a Saquon Barkley rushing TD gave the Giants their first season with more than six wins since 2016, with eight games to play.

Barkley carried the ball 35 times for 152 yards and the score, hours after national media had reported that the Giants and Barkley’s reps had discussed a contract extension but tabled talks until after the season. Darius Slayton had 95 yards receiving and a TD.

A playoff berth is on rookie head coach Brian Daboll’s horizon, even if they make none of these victories look easy. The Giants offense went quiet late after a 14-point third quarter outburst, putting it on the defense to finish the game.

Texans QB Davis Mills (319 yards passing) drove the ball easily down the field the entire second half, but Martindale’s unit was opportunistic when it mattered most.

“All plays in the red zone are big,” Lawrence said. “It’s guys being prepared and fearless.”

Leonard Williams punched the ball out from rookie Texans running back Dameon Pierce, and linebacker Jaylon Smith recovered the fumble at the Giants’ 11. Love had made a touchdown saving tackle on Texans tight end Jordan Akins’ 44-yard reception just prior.

“We like to strive for greatness, and we never think that we’re out of a fight,” Smith said.

Then on the next drive, Lawrence drew a holding penalty on Texans guard Kenyon Green to negate Mills’ TD pass to Brandin Cooks. And rookie safety Dane Belton — McKinney’s replacement for the foreseeable future — intercepted Mills in the end zone for a touchback on the next play.

Lawrence pressured Mills on the interception to Belton. Lawrence was a terror all game at defensive tackle. He recorded a sack, five tackles, five QB hits, a tackle for a loss, and a pass defended.

“He’s able to shine now that we’re winning,” Love said of Lawrence. “You can see his game taking over. We know he’s an All-Pro, Pro Bowl level player. We’re lucky to have him.”

The Texans managed two late Kai Fairbairn field goals, one after an Oshane Ximines forced fumble was overturned to an incomplete pass. But Graham Gano made a 49-yarder with 1:55 remaining for the Giants, as well.

Houston fell to 1-7-1 on the season. The Giants host the Detroit Lions (3-6) next week confident in their ability to pick up McKinney, who is out long-term with a left hand injury due to a bye week ATV accident in Cabo, Mexico.

“The number one thing for me was, being a vet, year seven, a leader, understanding how much ‘X’ loves this game and loves this team and wants to be there for us, it was immediately being there for him,” Smith said. “Wanting to make sure that his mental was OK.

“It’s not something he wanted to happen,” Smith added. “But it’s a blessing to still have him here. He still leads. For us, that next man up mentality matters. We’ve got to be able to rally together. So that’s the biggest thing about us staying as a unit and doing whatever we gotta do to get a win.”

After a slow first half, the Giants’ offense erupted for 14 points in the third quarter to take a 21-10 lead into the fourth. Daboll benched Kenny Golladay for the entire second half after two drops in the first.

Jones hit Slayton for a 54-yard touchdown for a 14-3 lead with 12:33 to play in the third. Slayton broke a Jalen Pitre tackle and got a good block from tight end Tanner Hudson down the left sideline. Jones delivered a timely ball under pressure.

Mills answered with a 12-yard TD pass to Nico Collins. Mills had 61 passing yards on the drive, almost double his 35 for the entire first half. That slimmed the Giants’ lead to 14-10 at 8:06 of the third.

But the Giants responded. Jones hit newcomer Isaiah Hodgins for a 26-yard completion on third down deep into Houston territory. Then Barkley punched in a 2-yard TD run with 2:21 left in the third and a 21-10 lead.

The Giants had led 7-3 at half after a frustrating first two quarters of offense that felt a lot like last season with a conservative approach, costly mistakes, and plenty of boos.

Daboll used a formation with eight offensive linemen several times and showed little faith in the passing game. And the fans booed Golladay for his drop and punter Jamie Gillan for landing a punt at the Texans’ 26 while trying to pin them deep.

But Jones put the Giants ahead early with a 9-yard TD pass to tight end Lawrence Cager on their first possession, and Houston managed -3 yards of total offense in the first quarter on nine plays and three drives.

Only when the Giants’ Lawrence came off the field for a breather did Pierce break free for a 44-yard run in the second quarter. Love made the touchdown saving tackle on Pierce to force a Fairbairn field goal, though, and foreshadow the finish.

“Good to get another win,” Daboll said. “I thought we did a lot of things well. Some things obviously to clean up on — like there always is.”