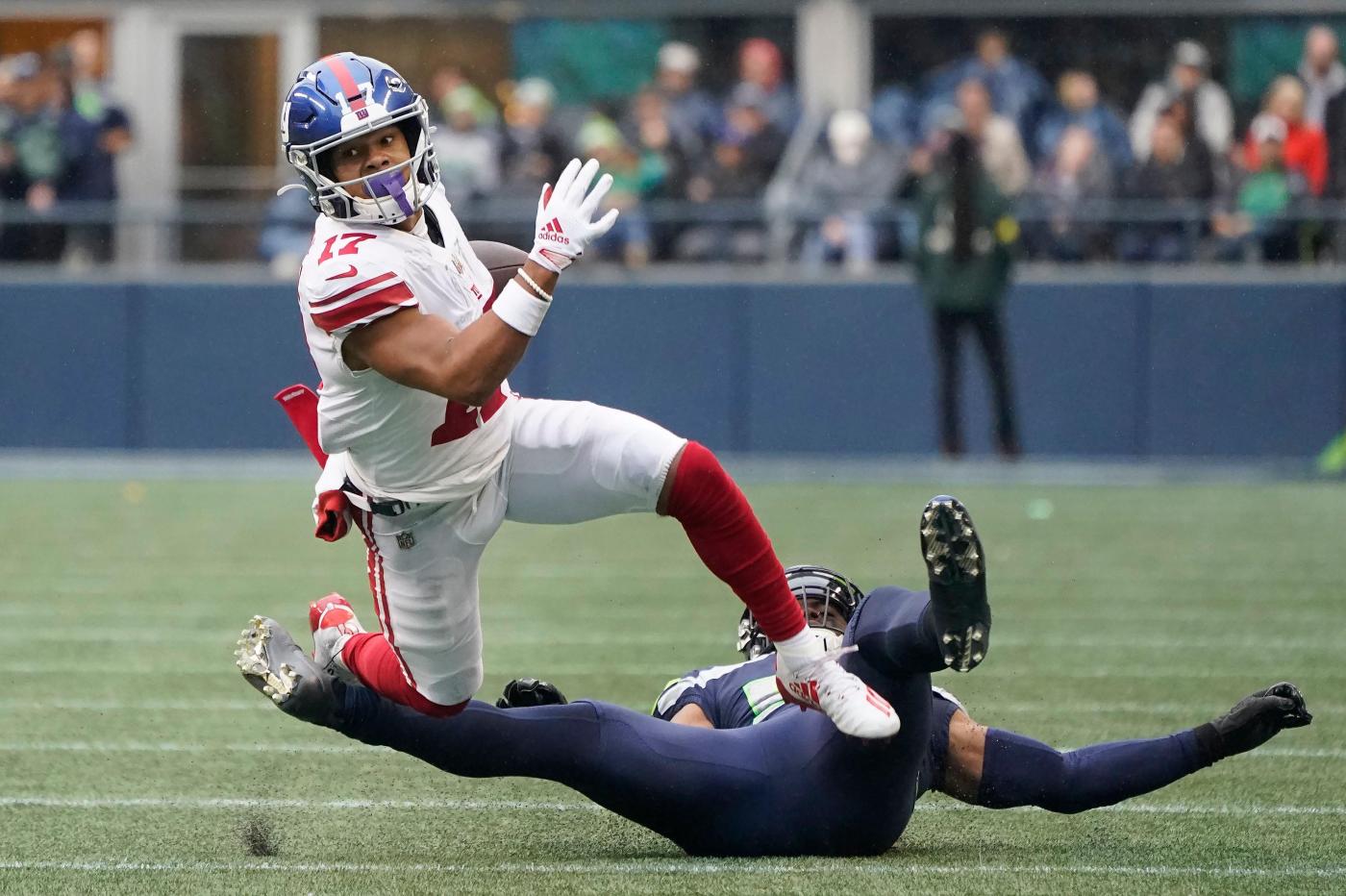 SEATTLE — This time, Geno Smith sat the Giants down.

Brian Daboll’s offense had its worst game of the season inside a deafening Lumen Field, and the Giants fell to the Seattle Seahawks, 27-13, to snap a four-game winning streak entering the bye.

“I’ve got to make a few more plays,” Daniel Jones said after the Giants (6-2) gained a season-low 225 yards of offense.

Smith, whose 2017 replacement of a benched Eli Manning prompted ugly blowback in New York, completed 23 of 34 passes for 212 yards and two touchdowns for upstart Seattle.

And he said this wasn’t about vindication or revenge. It was about proving a former Giants GM and head coach right.

“This game was for Ben McAdoo and Jerry Reese,” Smith said. “They believed in me. And so far as any other thing, I don’t really care for it. I’m happy to be here in Seattle. It’s like a family here. It feels like home.”

The Giants kept it close most of the day despite averaging only 3.5 yards per play, and they trailed 20-13 with just over six minutes remaining.

But punt returner Richie James lost his second fumble of the game on the Giants’ 32-yard line with 6:04 to play. And Seahawks rookie running back Kenneth Walker broke tackles for a 16-yard TD run to lift the surprising Seahawks (5-3).

“Taking care of the ball is one of our main goals and obviously we didn’t do it,” Daboll said. “Got the ball in good field position [at times] to capitalize on ten points. Turn the ball over on your side of the field, it’s tough. So we have to fix that.”

Smith played his best ball with the game tied at 13 apiece earlier in the fourth. He completed 5-of-5 passes for 75 yards on a five-play touchdown drive, capped by a 33-yard TD pass to Tyler Lockett with 9:18 to play.

Wink Martindale’s blitz-heavy Giants defense had sacked Smith three times in the first half, but he said Seahawks offensive coordinator Shane Waldron made good adjustments at half.

“I think they gave us like 20 Cover-0 (looks), which is probably the most I’ve ever had in my life,” Smith said. “We talked at halftime that if they were gonna give us that much space in zero, it’s basically 1-on-1 with a corner at least 10 yards off.”

On the touchdown, Lockett put a double move on Giants corner Adoree Jackson as payback for Jackson’s forced fumble on Lockett in the second quarter and a Lockett dropped touchdown in the third.

“We kinda saw on film opportunities that we could be able to take advantage of against Adoree,” Lockett said. “Luckily we were able to have a chance to do that, and we were able to score.”

Jackson said: “You just try to stay level-headed and understand the next play mentality. But at the end of the day, that’s a great team and they got the best of us today.”

After a quick three and out by Jones and the Giants’ offense, a defensive stop led to James’ second costly fumble, hit by Travis Homer and recovered by Will Dissly.

Smith eventually had the Seattle crowd chanting “Geno! Geno!” after a scramble late in the fourth quarter. Meanwhile, on the other end, Jones finished with 17 of 31 completions for 176 yards and was sacked five times.

On a couple occasions, Jones could have given Wan’Dale Robinson and Darius Slayton chances for deep shots but either didn’t see them or elected to throw underneath.

At other times, receivers dropped passes or failed to get open. Robinson had a red zone drop in the third quarter, for example, facing tight coverage from Seahawks corner Tariq Woolen.

“From a receiver standpoint, I think we need to do a better job of getting open, making plays on the ball and pretty much just doing our job,” said Slayton, who led the Giants with five catches for 66 yards. “As a whole today, we probably just didn’t make enough plays to win the game.”

The Giants outscored the Seahawks 6-3 in the early part of the second half to tie the game at 13 apiece with 11:17 in the third quarter. Graham Gano field goals from 31 and 45 yards more than matched Jason Myers’ 51-yarder in that span.

The Giants were fortunate to trail 10-7 at halftime, though, when they had only 17 yards passing at that point.

Jackson made the play of the first half: a forced fumble and recovery on the Seahawks’ 2-yard line with Seattle up, 7-0, threatening to take command. Jackson’s rip of the ball from Lockett set up Saquon Barkley’s 1-yard TD plunge to tie the game at seven apiece with 5:51 left in the second quarter.

James’ first lost fumble on a punt return gave the Seahawks a Myers 35-yard field goal with 1:38 left in the half. The kick knuckled through the uprights despite a Dexter Lawrence partial block.

But the Giants were still in a good place considering how slowly their offense had started in one of the league’s most hostile environments.

Jones’ offense went three and out on its first three series. Barkley didn’t touch the ball until the sixth offensive snap, on a screen that lost three yards. And he didn’t receive a handoff from Jones until the seventh snap due to play calls and run-pass-option reads.

The Seahawks outgained the Giants 108-46 in the half, primarily with a 15-play, 69-yard drive capped by a 3-yard Smith touchdown pass to DK Metcalf at 12:07 of the second quarter.

Sacks by Leonard Williams, Xavier McKinney and rookie linebacker Micah McFadden helped the visitors stay close and drag the Seahawks into a second half fight. That is all Daboll wants for his team each week: to have a chance to win at the end.

But this time, they couldn’t get it done. And Geno got the last laugh, even as he took the high road.

“Not at all,” he said, when asked if he had a sense of revenge. “I’m happy to be here in Seattle. I spent one year with the Giants, so that year to me is like a blur. My life has moved on from then. I don’t have any remorse towards anyone there.”