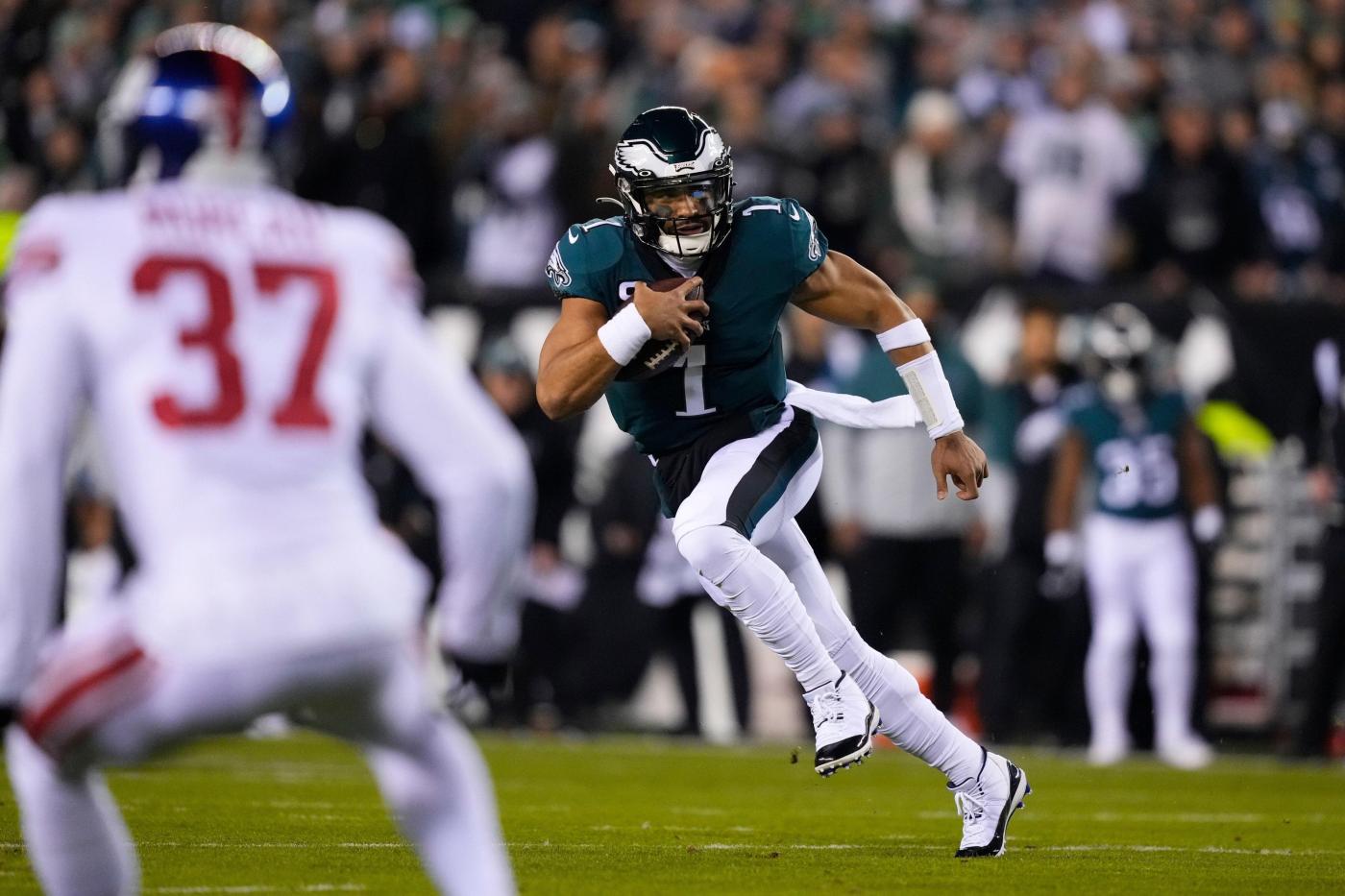 PHILADELPHIA — The Giants pulled off the road upset last weekend against the Vikings.

On Saturday in the NFC Divisional Round, Big Blue was looking for more underdog magic against a Philadelphia team that has had its number this season winning both previous meetings.

Unfortunately for the Giants, the third matchup in the series resembled the previous game in Philadelphia this season.

On a mostly cloudy, cold night at Lincoln Financial Field in front of a sellout crowd, the Eagles routed the Giants 38-7 to advance to the NFC Championship game, which Philly will host next Sunday.

Philadelphia has won the last 10 home meetings against the Giants.

There was a lot of talk about how healthy Eagles quarterback Jalen Hurts was, as he missed two games late in the season due to a sprained throwing shoulder. But on the game’s second play, Hurts threw a 40-yard pass to DeVonta Smith, which put the Eagles in Giants territory. He was 5 for 5 on Philadelphia’s first drive, leading to an open-drive touchdown.

He finished the game 16 of 24 passes for 154 yards, two touchdowns, and a passer rating of 122.9. Hurts also rushed for 34 yards and a touchdown on nine carries. The Eagles rushed for 268 yards on the ground as they averaged 6.1 yards per carry.

After having a career game against the Vikings a week earlier where he threw for 301 yards and two touchdowns, Giants quarterback Daniel Jones completed 14 of 25 passes for 130 yards and an interception. Running back Saquon Barkley ended the game with 61 yards on nine carries, with most of that coming on a 39-yard run during the third quarter.

The Eagles outscored the Giants 68-7 during the first half in the three combined meetings.

The Giants won the coin toss and deferred until the second half. Philadelphia started the game on its 25-yard line, but the team had no problems finding the end zone to begin the night. Smith’s 40-yard reception led to a 16-yard Hurts TD to tight end Dallas Goedert.

The Giants and Jones got to the Eagles’ 35 before back-to-back sacks on third and fourth down derailed their drive.

Philadelphia then took over at its 48 after forcing a turnover on downs and doubled its lead to 14-0. Hurts threw his second touchdown pass of the night, this time to DeVonta Smith, that ended an eight-play, 52-yard drive.

Following the Giants’ first punt of the game, the Eagles took over on their 37 at the start of the second quarter. Running back Miles Sanders was the MVP of the drive as he rushed for 42 yards on that possession alone. Philadelphia extended its lead to 21-0 on Boston Scott’s three-yard touchdown, his 11th career TD against the Giants. During that drive, the Giants defenders appeared tired as many had their hands on their hips after a long nine-yard, 63-yard drive.

Right before halftime, Philadelphia continued to rub it in on its NFC rival. The Eagles ran it down the Giants’ throat as Hurts capped off the drive with a five-yard touchdown run that put them up 28-0.

Finally, in the third quarter, the Giants found the end zone on a 10-play, 88-yard drive. Barkley’s 39-yard run helped set up a wildcat eight-yard touchdown pitch to Matt Breida, which cut the Eagles lead down to 28-7. With 5:16 left in the game, the Eagles added a 30-yard Jake Elliott field goal.

With the game in hand with less than two minutes in the game, Kenneth Gainwell scored a 35-yard touchdown that made the score 38-7.

The Giants season came to an end on Saturday night, but it was an exciting one for sure. The team improved from a 4-13 mark to 9-7-1 after clinching the sixth seed in the NFC in Brian Daboll’s first season as coach. This was the first season the Giants made the playoffs since the 2016 season and the first time they advanced to the divisional round since they won the Super Bowl in 2011.