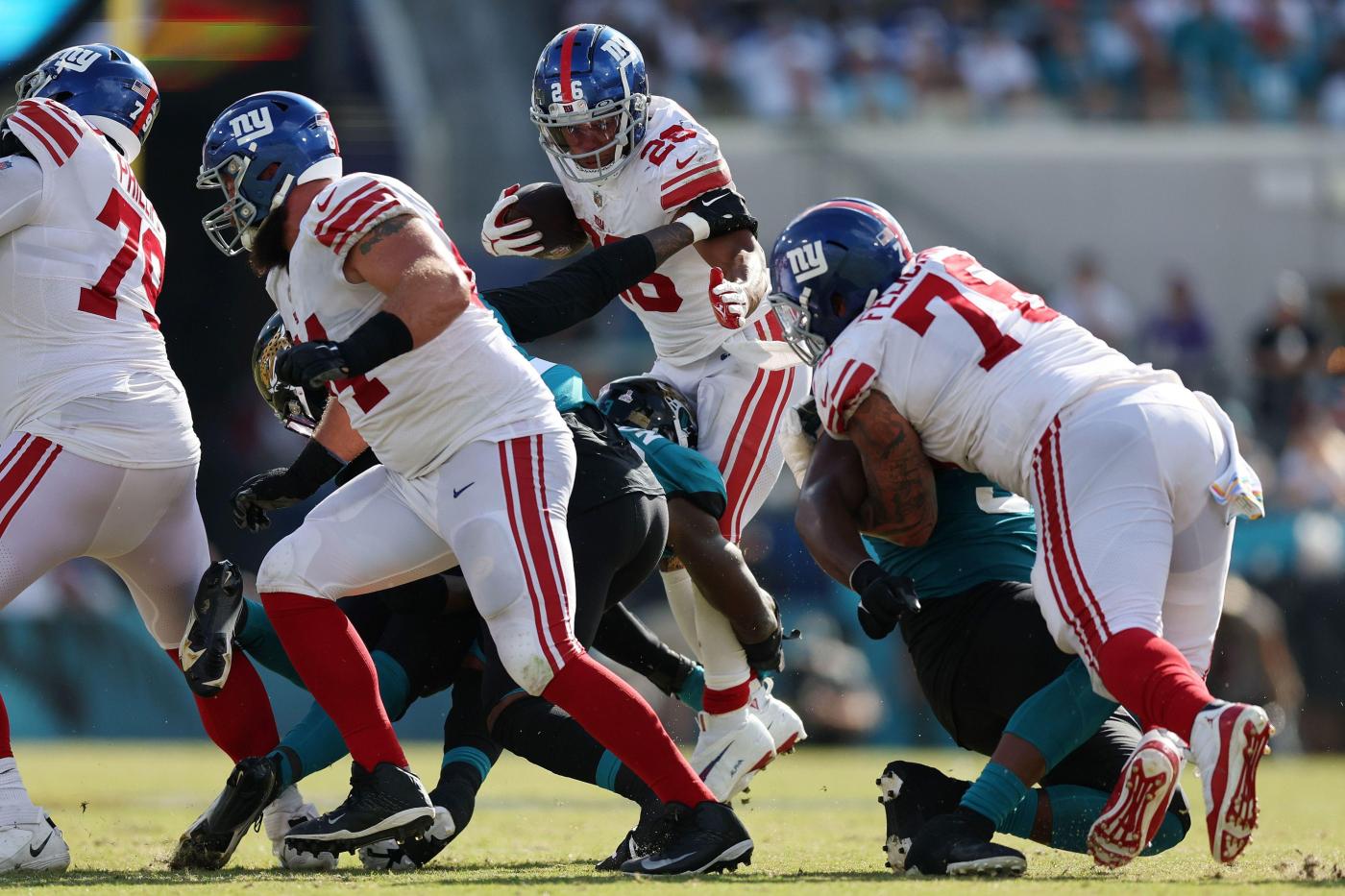 The Giants ran the same ‘Power’ running concept on eight consecutive plays on their final field goal drive in Sunday’s fourth quarter against the Jaguars.

“It’s rare for a team to do this,” ESPN analyst Dan Orlovsky, the former NFL quarterback, told the Daily News Monday. “But the offensive line has become the strength of the unit, and it gets the ball into the Giants’ best player’s hands.”

That player would be Saquon Barkley, who rushed six times for 44 yards on the drive, all six times to the right side.

“We did,” Barkley admitted postgame. “Can’t stop it, why not?”

The ‘Power’ concept added a sixth lineman, tackle Devery Hamilton, to the Giants’ front. And it pulled rookie left guard Josh Ezeudu from the backside and used tight end Chris Myarick as a lead-block fullback out of an offset I-formation.

They put Myarick in motion twice along the line instead of in the ‘I.’ They ran Matt Breida to the left side on one snap, pulling right guard Mark Glowinski to the left.

Jones also kept the ball and scrambled left for a 15-yard gain to wind the clock down to the 2-minute warning – with Myarick in motion left to right, Ezeudu pulling left to right, and Breida faking the handoff.

But all eight plays were the same ‘Power’ concept, and the Jaguars had no answer for it. The only reason the Giants didn’t end the game with it was because Barkley stepped out of bounds twice.

That’s one simple reason Orlovsky believes the Giants stuck with it: how effective it was on the first snap of that final drive, with Barkley bouncing outside for 13 yards.

“Once you call it on first down and he hits it like that you’re like, screw it, he is seeing it and feeling it,” Orlovsky said.

The former NFL quarterback also said power is advantageous for the Giants in a close-out situation because “You can run it against any [defensive] front.” The defense’s alignment isn’t going to change the plan.

Another reason the Giants stuck with their bread and butter is likely because they were playing two backups on the line: Ezeudu at left guard and Tyre Phillips at right tackle. And they simplified the calls to what their new personnel could best execute.

That’s good coaching, even if it means repeating a play that often.

“Yeah, we had a couple different personnel groups we couldn’t get into,” Daboll said of how the O-line injuries impacted playcalling. “Phillips had to jump in and then Ezeudu … young players that haven’t played a lot of football, in this environment, in a close game.”

Interestingly, Barkley noted that the Jaguars didn’t seem to notice the Giants’ repetition until it was too late.

This is a good example of how the Giants have so many options in their formations, as well as different paths back to their core concepts and gameplan. Players and coaches have noted this flexibility as a unique advantage and staple of Daboll’s and Kafka’s offense.

“I don’t know if they realized that it was the same play until probably like the fifth or sixth time, to be completely honest,” Barkley said. “Then we had something off of it when we [kept] it, and DJ made a big play, used his feet. It’s hard to [stop]. It can look like we’re running the same play, but you can run so many things out of that formation.”

It had to be demoralizing for Jacksonville to get punched in the mouth so frequently and effectively by the same play, right?

“Was it demoralizing?” Barkley said, repeating the question. “I don’t know. I can just tell when you lean on defense throughout the game, you can feel them starting to soften up, and [then you can] take them to the deep water and drown them.”