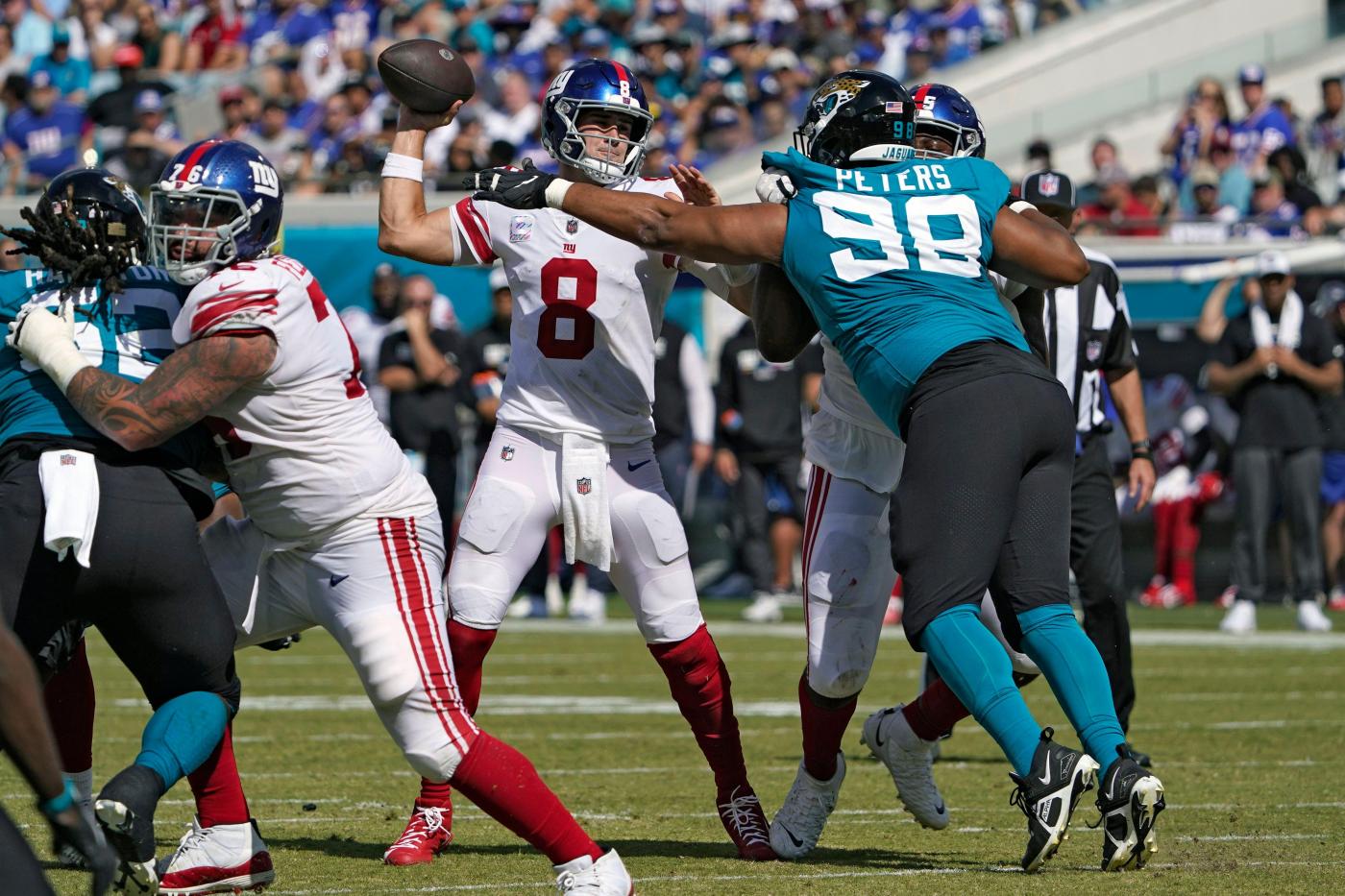 JACKSONVILLE – The Giants’ expectations have changed.

Brian Daboll’s players weren’t thinking like grateful underdogs who had scored a third straight upset after Sunday’s 23-17 nail-biter over the Jacksonville Jaguars.

They were carrying themselves like winners who expect to achieve a lofty goal beyond this regular season, unsatisfied with the mistakes that nearly prevented them from improving to 6-1.

“Other teams could just be happy right now that they got a win and they’re looking at their record, but that’s not what winning teams do,” center Jon Feliciano said. “It’s nice to have the win, but really, Jacksonville shoulda, coulda squeaked that out. We’ll come in Monday and work on the things we gotta work on.”

Saquon Barkley, their offensive focal point, committed the mother of all of Sunday’s miscues: He stepped out of bounds with 1:07 remaining, the Giants up three and the Jaguars out of timeouts. Staying inbounds would have run the clock under 30 seconds.

“You know you’re the reason they’re even in that situation,” Barkley said, shaking his head, despite finishing with 110 yards rushing.

Barkley also criticized himself for “running soft” while “thinking about the wrong things” in the first half — perhaps being protective of his right shoulder.

The defense was even more disappointed in themselves because they nearly wasted a dynamic day from Daniel Jones (career-high 107 rushing yards, 202 passing yards, two TDs).

“On those stops, we knew we had to make a play for our offense,” Smith said. “Our offense did a hell of a job today, with DJ moving the ball and keeping us in it. We knew it was our time to make a play, to do something, to have an impact on the game.”

Even Jones showed frustration and significant emotion on Sunday, which was out of character for the normally stoic quarterback but not necessarily unwelcome.

Cameras caught Jones yelling “catch the ball” after receiver Marcus Johnson’s 4th and 2 drop at the Jaguars’ 1-yard line. Another shot showed Daboll pushing QB coach Shea Tierney away from Jones to talk with the fired-up QB on the sideline in the fourth.

Jones felt bad if he appeared to show up Johnson, which was not his intent.

“Heat of the moment, and I wish I could have that situation back,” he said. “I pride myself on being composed in those situations. I wasn’t there. I’ve got full faith and confidence in the world in Marcus, and yeah, I’m disappointed I let that happen.”

It’s OK, though. Because Jones’ frustration, the defense’s frustrations, and Barkley’s frustrations are all coming from the best place: These Giants think they can be something this season.

Smith, the veteran linebacker, said “there’s one ultimate goal and we gotta focus week to week on that.”

McKinney said the Giants need to improve “in order to get where we want to be.”

They’re not saying the word “playoffs” out loud. But after overcoming a second-half deficit for the fifth time through seven games, they’re done thinking they don’t belong.

They see the task ahead: to keep winning, to improve, and to fortify themselves for a run of five NFC east games in seven weeks from Thanksgiving through Jan. 8.

McKinney, in fact, didn’t want to hear the weekly question about how many doubters the Giants still have. They don’t think of themselves as underdogs. They have higher standards.

“I don’t even care for that question anymore,” the safety said. “I’m kind of tired of answering it because it’s the same thing every week. Obviously we know that. We really don’t care.”