Todays Though > News > Giddy Up! and Whoa Down! for Week 7 – Boston Herald
News

Giddy Up! and Whoa Down! for Week 7 – Boston Herald 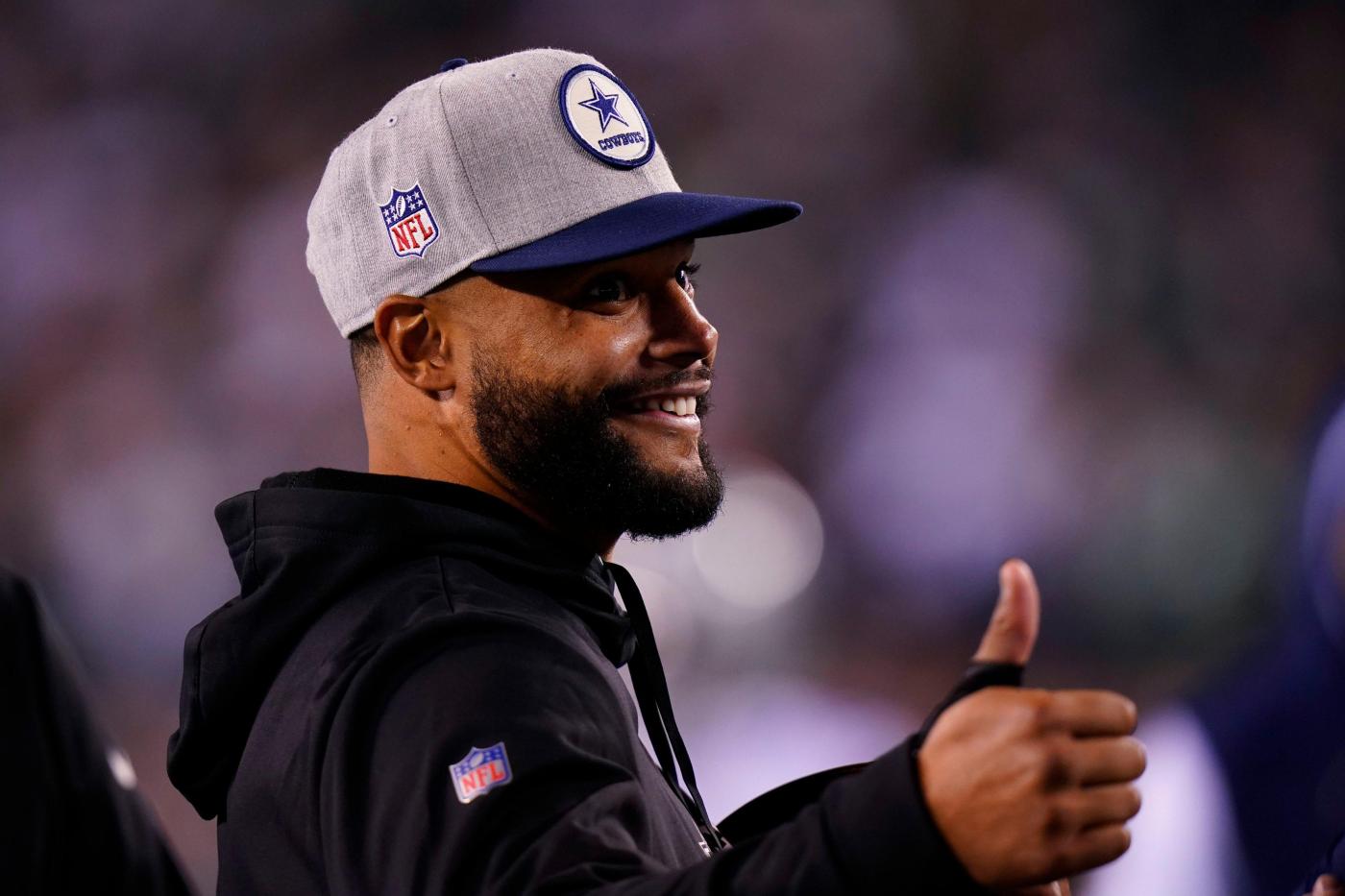 I will never understand the knee-jerk reactions of NFL coaches. RB Jeff Wilson Jr. has been stellar in the backfield for the 49ers. He is 12th in rushing in the NFL, ahead of such luminaries as Christian McCaffrey, Joe Mixon and Jonathan Taylor. 92% of all fantasy owners started Wilson against the Falcons as he was ranked a top-ten RB last week. Yet when he fumbled in the game, Wilson was summarily benched by coaching “genius” Kyle Shanahan and only touched the ball three more times. The 49ers went pass-heavy after that. QB Jimmy Garoppolo threw two interceptions in an embarrassing loss. Wilson’s Fantasy owners lost as well. He has fumbled just five times in his career, so the punishment was punitive and a blow to his psyche. I realize NFL coaches don’t cater to Fantasy Football, but thanks for nothing Kyle Shanahan. You’re not so smart. As we look at our Giddy Ups! and Whoa Downs! for Week 7, make sure to check the NFL injury reports before submitting your lineups.

Dak Prescott, QB — Welcome back Dak. Now that his fractured thumb has healed, I can think of no better opponent for Dak to face than the Detroit Kittycats. You know it’s a bad Lions pass D when even Carson Wentz put up three TDs and 300 yards.

Travis Etienne, RB — The RB pecking order in Jacksonville is shifting away from James Robinson and towards Etienne. He’s averaged six yards per carry over the last three games. It’s a perfect matchup this week since the Giants give up about … six yards per carry.

Kenyan Drake, RB — I love the Drake. He blew up the stats board with his shocking sixth-place PPR finish for RBs, subbing for an ailing J.K. Dobbins. If Dobbins is out this week, the sky’s the limit for the Drake against Cleveland’s sieve-like run D.

Chris Godwin, WR — Godwin has yet to score this year because Tom Brady has thrown for one TD in five of the last six games. Very un-Brady-like. Positive regression says Brady will put up three TDs on the Panthers, and Godwin gets his first tuddy.

Michael Gallup, WR — It’s been a slow recovery from a torn ACL for Gallup. His playing time has increased with each game. The Lions will concentrate their efforts covering WR CeeDee Lamb, giving Gallup a “Giddy Up” kind of day.

Gerald Everett, TE — The Seahawks are the worst team in the NFL covering TEs. Even the massively disappointing Kyle Pitts put up 87 yards on them. Everett is my seventh-rated TE for the week, right between Zach Ertz and David Njoku.

Taylor Heinicke, QB — Don’t look in the trash for Fantasy gold. I know Heinicke had some surprising Fantasy stats last year, but don’t get cute by starting him over Aaron Rodgers or Matt Ryan. Facing a ticked-off Packers team that just lost to the Jets is not an ideal spot.

Tua Tagovailoa, QB — If we remove Tua’s outlier performance against the Ravens, he is averaging 15 points per game. You won’t win many Fantasy games with a 15-point QB.

David Montgomery, RB — Da Bears offense is in hibernation. Traveling to New England for Monday Night Football to combat the top-ranked run defense is not going to wake Montgomery and his fellow bruins from their slumber.

Terry McLaurin, WR — “Scary Terry”? More like “Contrary Terry.” He’s done just the opposite of what was expected this year. Heinicke will have to throw quick outs to avoid the Green Bay pass rush. Looks more like a Curtis Samuel game.

Jerry Jeudy, WR — After two nationally televised disasters, it’s time to be Bronco busters. How can you possibly start Jeudy? Or Cortland Sutton or Melvin Gordon?

Robert Tonyan, TE — Tonyan had an impressive 10 catches for 90 yards last week. I think that total gets cut in half this week.