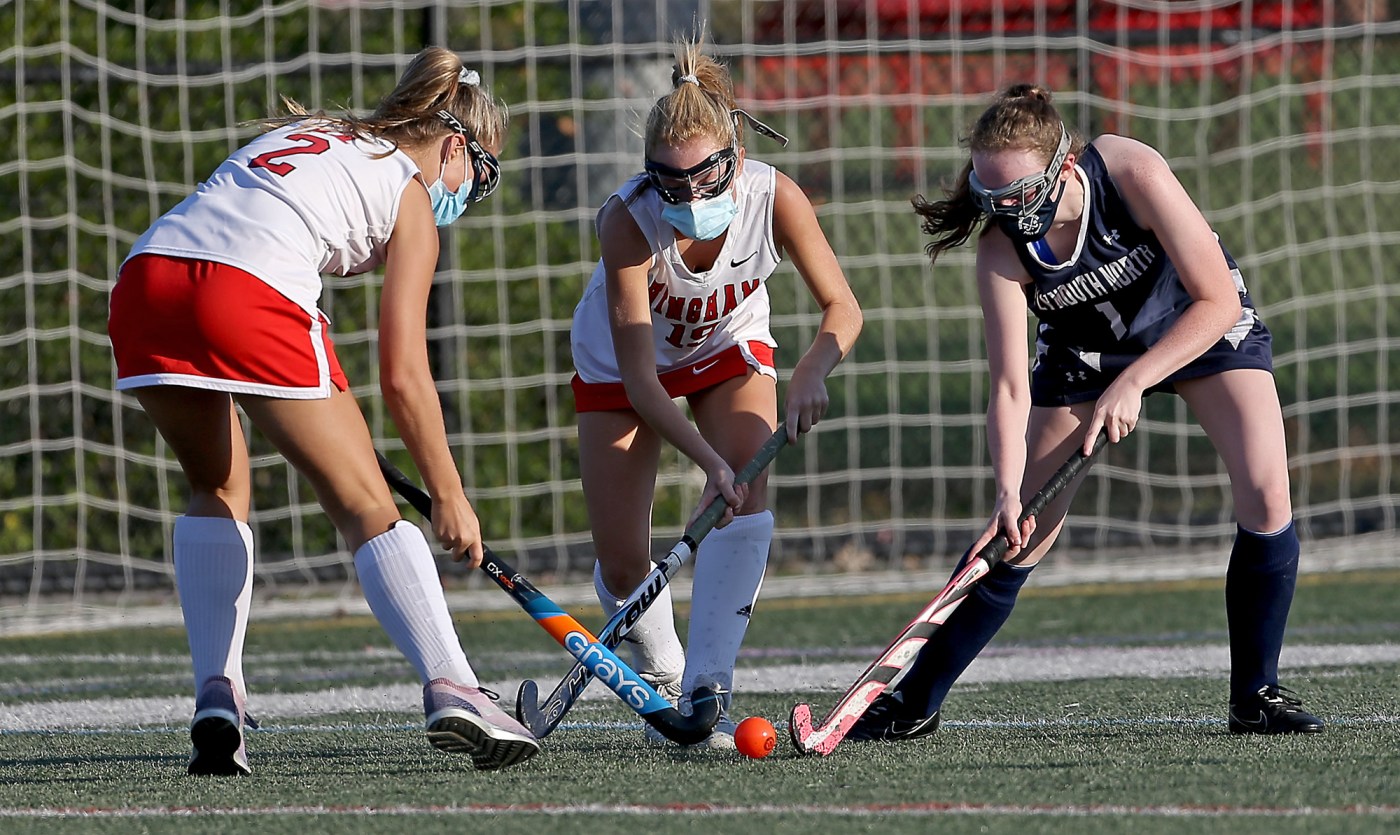 During her junior season, Affolter buried 58 goals to go with nine assists, helping Newburyport dominate the Cape Ann League. She was co-MVP of the league, and a First Team CAL All-Star. The midfielder was also selected as a second-team EMGLCA All-Star for the second straight season. Affolter is a member of the National Honor Society, and plays lacrosse for the Middlesex Bears in her spare time.

Berigan stood out as one of the top offensive players in the commonwealth this past year, as she racked up 105 points, including 79 goals. The senior also registered 36 caused turnovers and 33 draw controls to help lead Hingham to the Div. 1 Round of 16. Berigan will continue her lacrosse journey at Monmouth University.

Blake saved her heroics for the playoffs, as she played a primary role in guiding Medfield to a Div. 3 state title, the first championship for the program since 2012. The junior finished with 56 goals and 18 assists, with 56 draw controls as well. A Northwestern commit, Blake also has also played for Mass Elite Lacrosse, and boasts a 4.03 GPA.

Blake proved to be a sophomore sensation for Medfield during its championship-winning season, as she exploded for an incredible 159 points (101 goals, 58 assists). She tallied 177 draw controls, netted 43 ground balls, and caused 51 turnovers. She is a member of the 2021 U16 USA National Team.

Carney had 60 goals this past campaign, and dished out 19 assists. The junior also had a career-high 46 draw controls, as Franklin embarked on a trip to the Div. 1 Round of 8. An honor roll student, Carney is already committed to playing lacrosse at James Madison University, where she plans on studying art, architecture and design.

Deehan was the ultimate scoring option for Westwood, as the Wolverines captured their second consecutive Div. 1 girls lacrosse title this past June. She sniped 79 goals and added 19 assists, while accumulating 68 draw controls and 42 ground balls. She was selected as an EMGLCA First Team All-Star for her performances. She has verbally committed to Tufts in the fall of 2023.

A first team Eastern Mass. All-Star, Dibble helped Concord-Carlisle reach the Div. 1 Round of 8 in 2022. She was selected as a Dual County League All-Star as well. Dibble will continue her lacrosse career in the NESCAC, as she is committed to Wesleyan University for next year.

Diomede closed her fantastic career at Westwood with a Div. 1 state championship, and she was one of the key reasons why. She tallied 106 points (72 goals, 34 assists) and notched 61 draw controls. The Wesleyan-bound senior also was a pest defensively, hauling in 40 ground balls while causing 35 turnovers, as the Wolverines capped a perfect season (while riding a 48-game winning streak). Diomede plays for the Mass Elite club team, and enjoys traveling and volunteering.

Dumalac delivered by carrying Wellesley to an appearance in the Div. 1 girls lacrosse title bout. The senior had a career-high 85 goals and added 29 assists. She was one of the most dominant playmakers in the state, as she collected 130 draw controls and 24 caused turnovers. A two-time Boston Herald All-Scholastic and Bay State Conference All-Star, Dumalac is committed to Davidson College.

Fisher registered an 82-point campaign (64 goals, 18 assists) for Duxbury during its journey to the Div. 1 Final Four. She added 113 draw controls, and corralled 20 ground balls in the process. The recent graduate enjoys wakeboarding as a hobby during the summer. She will continue to play lacrosse for Saint Francis University.

During the course of her senior season, Fortier came away with 143 saves, with a percentage of 50%. The goaltender was named an EMGLCA First Team All-Star for the second straight year. Fortier finished with high honors every term of her high school career, finishing with an outstanding GPA of 4.45. A member of the National Honor Society, Fortier will attend Dartmouth College.

Geddes erupted for 92 goals. The junior also added nine assists in addition to 100 draw controls and 26 caused turnovers. She was named the MVP of the Middlesex League (Liberty Division), and an EMGLCA All-Star. A First Team US Lacrosse All-American in her own right, Geddes also holds Winchester High’s indoor track record in the 300-meter dash. She is committed to Boston University for lacrosse.

Hamilton netted 141 goals in addition to winning 60 draw controls, and was selected as the Cape Ann League Player of the Year. She was named a CAL First Team All-Star, and EMGLCA Second Team All-Star on top of things. Hamilton also enjoyed a stellar soccer career at Hamilton-Wenham, which featured a Div. 4 state championship in 2021. She is off to Middlebury College, where she will stick with lacrosse

A Quinnipiac commit, Harrington recorded 95 saves (52%) in 2022, and finished a state champion with Westwood. She added 11 ground balls and five caused turnovers, and was named an EMGLCA All-Star. The junior has also starred for Westwood’s field hockey program, and is a member of both the National Honor Society as well as the National Spanish Honor Society. During her downtime, Harrington also plays for the Mass Elite club organization.

She may have only been a sophomore, but Hilsabeck played like a seasoned veteran for Notre Dame (Hingham) during its dominant run to a Div. 2 girls lacrosse crown. She was one of the top scoring threats for the Cougars (64 goals, 21 assists) in 2022, and hauled in 42 ground balls. Hilsabeck also finished with 22 draw controls to go with 12 caused turnovers.

The 2022 South Shore League (Sullivan Division) Player of the Year, Johnson went on to score 39 goals while dishing out 17 assists. She accumulated a team-high 43 ground balls for Norwell this past season as well. Johnson is a member of the National Honor Society, the Foreign Language Honor Society, and the Student Athlete Advisory Committee in addition to serving as a peer educator. She will be attending Boston College.

Already committed to Boston College, Kenney propelled Notre Dame (Hingham) to a Div. 2 state title by sniping 85 goals to go with 17 assists. The junior corralled 23 ground balls, and was named an EMGLCA First Team All-Star. Outside of lacrosse, Kenney also is a team captain for Notre Dame’s cross country program.

The Southeast Conference was dominated by Lawton this spring, as she racked up an incredible 111 goals, 14 of which came during the course of three state playoff games. The Cornell commit netted 20 assists as well, helping to power Dartmouth (20-2) to the Div. 2 Round of 8, the best finish in program history. Lawton also has a knack for volleyball, having been named a Boston Herald All-Scholastic twice.

Mickelson emerged as one of the Cape Ann League’s premier goal-scorers in 2022, finishing with 70 overall to go along with 28 assists. Mickelson is a very active member of her community, having coached youth programs as a volunteer while also serving as a counselor at Cedardale Summer Camp. Mickelson was also selected to the Revolution Lacrosse Black Team (highest honor) this past year. She will attend Iona next, where she will continue her playing career.

Eclipsing 100 points in a season is pretty impressive. 169? That’s next-level, and that’s precisely what Morry put forth (105 goals, 64 assists) this year. The two-year captain was named an Eastern Mass. Coaches Association All-Star for the second time. Morry recently served as President of the National Technical Honor Society at Mashpee, and is a member of the National Honor Society. She will attend UMass-Lowell next, where she will continue to play lacrosse while majoring in nursing.

A first team EMGLCA selection, O’Brien amassed 141 goals and 42 assists for 183 points to go along with 108 ground balls and 134 draw control. For her career, O’Brien finished with 507 goals and 206 assists for 713 points. She will play college lacrosse at Johns Hopkins.

O’Rourke was MVP of the Hockomock League in 2022, and it was pretty clear why. The senior captain buried 46 goals and notched 15 assists. She registered 66 draw controls, and was chosen as an EMGLCA First Team All-Star. A US lacrosse All-American, O’Rourke is bound for the University of New Hampshire.

After battling injuries in recent years, Stephens returned to full strength this past spring and immediately returned to incredible form. The senior finished with 110 points (81 goals, 29 assists), and had a whopping 104 draw controls. She also hauled in 59 ground balls to go with 33 caused turnovers, as Cohasset embarked on a journey to the Div. 3 championship game. A nine-year member of the Laxachusetts club team, Stephens is committed to Brown University.

The Merrimack Valley Conference Player of the Year was a Swiss Army Knife for Billerica. She proved to be a scorer (80 goals,  47 assists), but also left her mark defensively with 72 ground balls. The senior midfielder had 140 draw controls as well, and was named to the All-Eastern Mass. Lacrosse Conference First Team. Trainor is committed to Long Island University, where she plans on studying nursing.

Wales erupted for 53 goals and 24 assists this season, and was named the Northeastern Conference’s Most Valuable Player. She was named an EMGLCA First Team All-Star, as Marblehead enjoyed a run to the Div. 2 Round of 8. A longtime standout with Marblehead’s girls hockey program and a member of the National Honor Society, Wales is headed off to Villanova next year.

Whelan was the catalyst for Walpole during a historic season, in which the top-seeded Timberwolves embarked on a trip to the Div. 1 Final Four. She sniped 87 goals while dishing out 46 assists, and finished with 111 draw controls. Whelan concludes her high school career as a two-time EMGLCA First Team All-Star. She is committed to UMass, where she expects to study business.

Zorn netted 86 goals to go with 36 assists and 22 caused turnovers this year, helping Bedford reach the Div. 2 title game (the first trip to a state championship in the program’s history). Zorn has also stood out for Bedford’s girls basketball program, having been named a 2022 Dual County League All-Star. A recipient of the Wellesley College Book Award, Zorn is committed to Tufts, where she will play lacrosse.