Todays Though > News > Going to a Chicago Bears game? Here’s what to know if you’re headed to Soldier Field this season. – Boston Herald
News

Going to a Chicago Bears game? Here’s what to know if you’re headed to Soldier Field this season. – Boston Herald 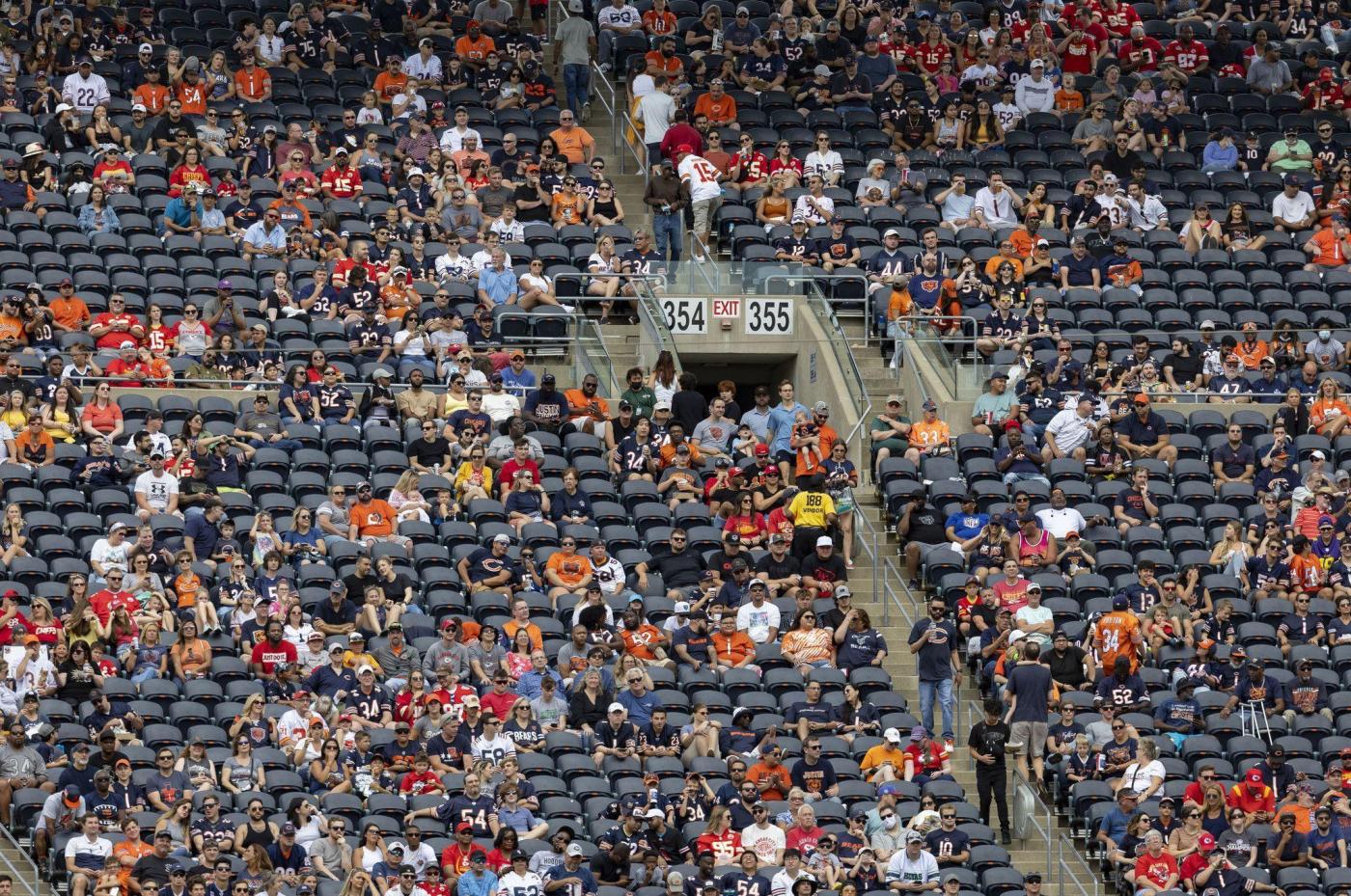 Welcome back to another season of Chicago Bears football at Soldier Field.

No, there’s no dome yet (but here’s what that would look like). And no, we don’t know how long the team will be playing by Lake Michigan (more on that here). But we do know that there’s a new head coach, new general manager … and new expectations for quarterback Justin Fields.

Here’s what to know if you’re going to a Bears home game this season.

There are 17 regular-season games this season — with nine at home. Here are season predictions from our Bears writers.

Only mobile tickets will get you into Soldier Field. Purchasers can manage their tickets on their mobile device or online, including the ability to share tickets or post tickets for resale. Here’s how to do that.

We recommend adding your ticket to your phone’s digital wallet before heading out (in case of weak signals or slow Wi-Fi on site). Screenshots of tickets are not valid for entry.

If you’re new to Soldier Field, here’s a seating chart — and how the field looks from that view.

Game times could shift starting in Week 5, thanks for flexible scheduling by the NFL (and for TV reasons). So check those tickets. If a game is canceled and not replayed because of COVID-19, tickets purchased through Ticketmaster will automatically receive a full refund.

What time do the gates open?

Gates open two hours before kickoff (so that’s 10 a.m. for noon starts). With increased screening and metal detectors at all games, arriving early is strongly encouraged.

One bag per person is allowed, but … that bag must be clear plastic, vinyl or PVC not exceed 12 by 6 by 12 inches. If you don’t have a bag that fits that requirement, a one-gallon resealable clear freezer bag or clutch purse no larger than 4½ by 6½ inches is acceptable. Medical bags are allowed as well.

Anything else new to know about?

Aside from the new Bermuda grass, everything inside Soldier Field will be cash-free. So that means credit, debit or prepaid card or mobile payment is what you’ll need for concessions, retail gear and roving food and beverage vendors. Fans can transfer cash to a Visa prepaid card for no fee at the ticket office window at Gate 8, the Gate 0 pro shop, the “Water Wall” pro shop and pro shop in the Club 100 Level.

What’s the best way to get to Soldier Field?

Soldier Field is located at 1410 Special Olympics Drive in Chicago.

Check out transitchicago.com for fare information, route schedules and maps.

Metra offers two weekend-pass options. Unlimited rides on Saturday or Sunday are $7. Up to three children age 11 and under can ride free with each fare-paying adult. A weekend pass includes unlimited rides for $10, available only in the Ventra app.

A limited number of Pace buses will be available at each boarding location — on Routes 236, 768, 769 and 776 — for transportation to Soldier Field during Saturday and Sunday home games only during the Bears’ regular season. All riders will be seated on a first-come-first-served basis. Buses begin boarding up to 30 minutes before departure. Cost is $4.50 each way. Check pacebus.com for the latest information.

How much is parking — and where’s the best spot?

If you go to a Bears game but don’t tailgate, did it really happen?

Fans can tailgate on all surface lots of the Museum Campus, the upper level of the Waldron Deck and the Southwest Parking Facilities (McCormick Place 31st St. Lot B, D and E only) — but keep the setup to your parking spot. Tailgating during the games or after night games and consuming alcohol in the “Family Friendly” No Alcohol lots are all prohibited.

“By the time I get in and set up and get everything rolling, it’s time to get in for the game,” said Ken Michalski, who has faithfully tailgated at Chicago Bears games for 38 years and was inducted into the Tailgating Hall of Fame in 2021. “It’s very limited on time.”

Pre-cook food in foil pans that can be heated up quickly on the grill, or stick to simple entrees such as hot dogs and hamburgers. Michalski also recommends streamlining what you bring, so breakdown is easier before you head into the game.

Everyone knows the old-guard options of how to fill that cooler: Bud Light, Miller Lite, Modelo and, of course, welcome to the club, White Claw. But a tastier tailgate can be had. Here are 10 recommendations.

What about eating around the South Loop?

There are spots — both indoors and outdoors — where non-tailgaters can grab some pregame grub (and a few bars too).

What else to see before the game

Statues of George Halas and Walter Payton were unveiled outside Soldier Field in 2019. The two 12-foot, 3,000-pound creathions are both Gate 0, the entrance on the stadium’s south side.

A doughboy statue to honor World War I servicemen can be found in the courtyard inside Gate 0. There is also a sculpture to celebrate Special Olympics, which started in 1968 at Soldier Field, between the Field Museum and the north end of the stadium.

Those entering the stadium from the north can walk into the stadium past the Memorial Water Wall, 250-foot long granite wall adorned with eight medallions and seals to honor each branch of the armed services.

Once you’re at the game

Well, first of all, it’s in Chicago — so there’s nice views of the downtown to the north, Lake Michigan to the east and a backed up Jean Baptiste Point DuSable Lake Shore Drive to the west.

A walk along the upper southern wall of the old the stadium not only gives a sense of scale to the huge new structure as well as the far smaller old one, but it is adorned with memorials.

Soak it in all, Bears fans. Because a move to Arlington Heights appears like a foregone conclusion.

What’s that I hear?

Among the longest-running traditions in the Bears’ long history is their fight song, “Bear Down, Chicago Bears.” The song, which is played every time the Bears score at Soldier Field, was created in 1941 by composer Al Hoffman, under the pseudonym Jerry Downs.

Bear down, Chicago Bears, make every play clear the way to victory;

Bear down, Chicago Bears, put up a fight with a might so fearlessly.

We’ll never forget the way you thrilled the nation, with your T-formation.

Bear down, Chicago Bears, and let them know why you’re wearing the crown.

You’re the pride and joy of Illinois, Chicago Bears, bear down.