Todays Though > News > Grading the Dolphins’ 34-31 playoff loss at Buffalo, plus stock up, stock down – Boston Herald
News

Grading the Dolphins’ 34-31 playoff loss at Buffalo, plus stock up, stock down – Boston Herald 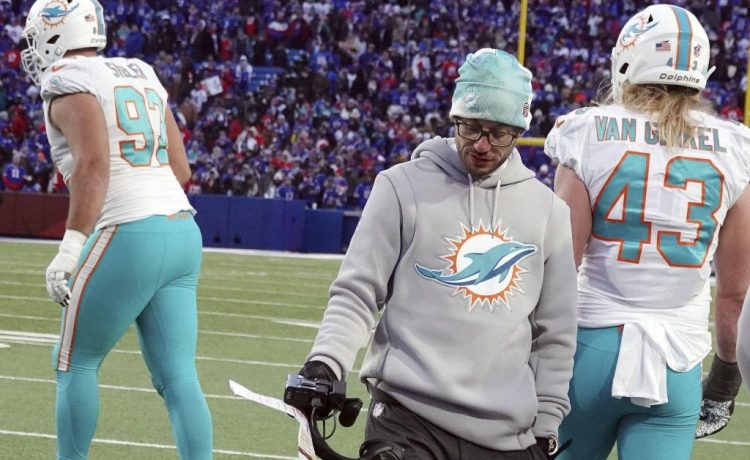 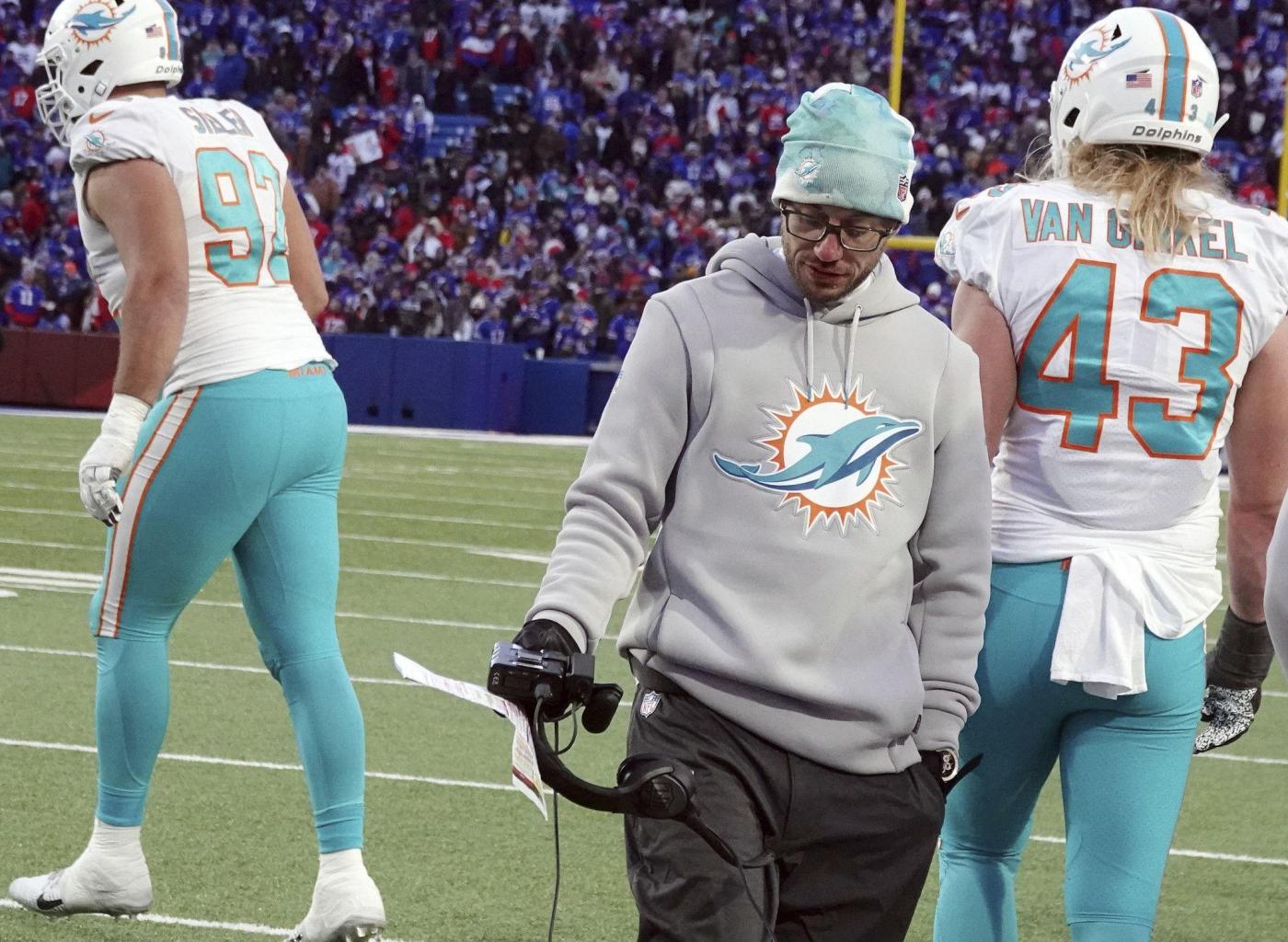 A wild Dolphins season that began with a rousing three-game winning streak ended Sunday with a hard-fought 34-31 wild-card loss at Buffalo. This season involved all types of excitement from the mysterious absence of cornerback Byron Jones (foot/ankle surgery in March) to quarterback Tua Tagovailoa’s concussion issues to dodging Hurricane Ian right before the Cincinnati game to the riveting five-game winning streak to the humbling five-game losing streak to the clutch season-finale victory over the New York Jets that earned them their first playoff berth since 2016.

The season was successful because of the playoff berth. But the Dolphins, who finished the regular season 9-8, have lots of work to do in the offseason to become a title contender.

The Dolphins earned lots of respect with that playoff appearance, fighting back from a 17-0 deficit with a rookie quarterback and a rookie head coach, who both showed their inexperience during the postseason.

Here’s a quick look at what happened during the Bills game.

Rookie quarterback Skylar Thompson (18 of 45, 220 yards, one touchdown, two interceptions, 44.7 passer rating) did what he could, and although he didn’t deliver the victory he filled his role to the best of his ability and that’s all you can ask. Wide receivers Tyreek Hill (seven receptions, 69 yards) and Jaylen Waddle (three receptions, 44 yards) each had a drop as well as running back Jeff Wilson Jr. Thompson was under duress considering he took five sacks and 11 hits, but that’s understandable considering the offensive line was missing two starters and did some shuffling to accommodate the absences. The big plays in the passing game weren’t there and that was a combination of Thompson not having a connection with Hill or Waddle, and good defense on either the front end, the back end, and sometimes both. Tight end Mike Gesicki (two receptions, 15 yards, one touchdown) got in on the act with a touchdown but he only had two receptions. More was needed in this area but it’s tough to blame Thompson. He’s a rookie seventh-round pick. The other guys, starting with McDaniel, need to pick up the slack.

This was a calamity. The Dolphins ended with 42 yards rushing on 20 carries and hardly put a scare into the Buffalo defense in the process. The unfortunate thing is a successful running game would have given Thompson and the offense a better chance of success because it provides balance, makes them less predictable and takes pressure off Thompson and the pass protection package. The Dolphins never got the run game going consistently this season, and that was a big flaw in the offense. McDaniel must find a solution to this issue next season, and it probably starts with play-calling.

Buffalo quarterback Josh Allen kept the Dolphins in the game with his sometimes careless play. His two interceptions, one by cornerback Xavien Howard and the other by safety Jevon Holland (nine tackles), and two fumbles, one of which was returned for a touchdown by defensive tackle Zach Sieler (six tackles, 2.0 sacks) , were crucial. Linebacker Jaelan Phillips (nine tackles, .5 sacks), safety Eric Rowe (seven tackles, caused fumble) and linebacker Jerome Baker (seven tackles) were also good. Defensive tackle Christian Wilkins made a major contribution with one sack, four tackles, two quarterback hits and steady pressure. The problem here was Diggs (nine receptions, 114 yards) took advantage of his matchup with Howard, and that hurt badly. Allen didn’t have one of his better games but he played good enough to win. The Dolphins’ pass defense wasn’t far behind.

The Bills rushed for 107 yards on 26 carries, although there was nothing special here they kept the chains moving against a run defense that finished the regular season No. 4. Running back Motor Singletary (10 carries, 48 yards) and James Cook (12 carries, 39 yards, one touchdown) weren’t necessarily good, but they did what they could. Buffalo came out throwing at the start, but added the run and it was a good idea. The defensive line, led by Wilkins and Sieler, but also with contributions from defensive tackles John Jenkins and Raekwon Davis, and linebackers Elandon Roberts and Baker, made sure Buffalo’s run game didn’t get out of hand. Nonetheless, the Bills were effective.

Kicker Jason Sanders and punter Thomas Morstead were good, and so were the return games and coverage units, save for one play. Punt returner Cedrick Wilson had a 50-yard return that led to a field goal and the punt coverage team was all over the fumble by Buffalo’s Nyheim Hines (the Bills eventually recovered the loose ball). Sanders made three field goals and Morstead, who was forced to make a tackle on a punt return early in the game, flipped the field successfully, for the most part. This was one of better performances from special teams, and it was timely.

Two words: clock management. Yeah, rookie coach Mike McDaniel sure appeared as though he was head coach in his first playoff game. He didn’t have his play-calling system smoothed out from the standpoint of getting the call from the sidelines to Thompson. This resulted in a second-half disaster that saw the Dolphins burn timeouts to beat the play clock and, as a final insult, take a costly delay of game penalty on their final possession because the play clock was expiring. Defensive coordinator Josh Boyer had his guys ready to play as did special teams coordinator Danny Crossman, two men whose jobs might be in jeopardy this offseason. They had their guys ready. McDaniel? Well, he’ll be better next year.

These guys proved to be tough-minded with an enduring spirit. They had opportunities to fold many times this season yet they kept fighting and battling until it turned into a playoff berth. And then in the playoffs they went on the road and played one of their best games of the year. This team wasn’t especially talented man-for-man, but they played hard and kept a positive attitude. Very well done.

This isn’t a big deal. Overall, he had a successful debut season. But the rookie crashed hard at the end. Defenses figured out his offense, he didn’t use the run enough, and at times, whether it was Thompson or veteran quarterback Teddy Bridgewater, there were problems getting the plays to the field quickly enough. Again, McDaniel had a good season. But let’s not ignore the obvious problems that plagued this team down the stretch. They’re all correctable. And they must be corrected if the Dolphins are going to build on the success of this season.