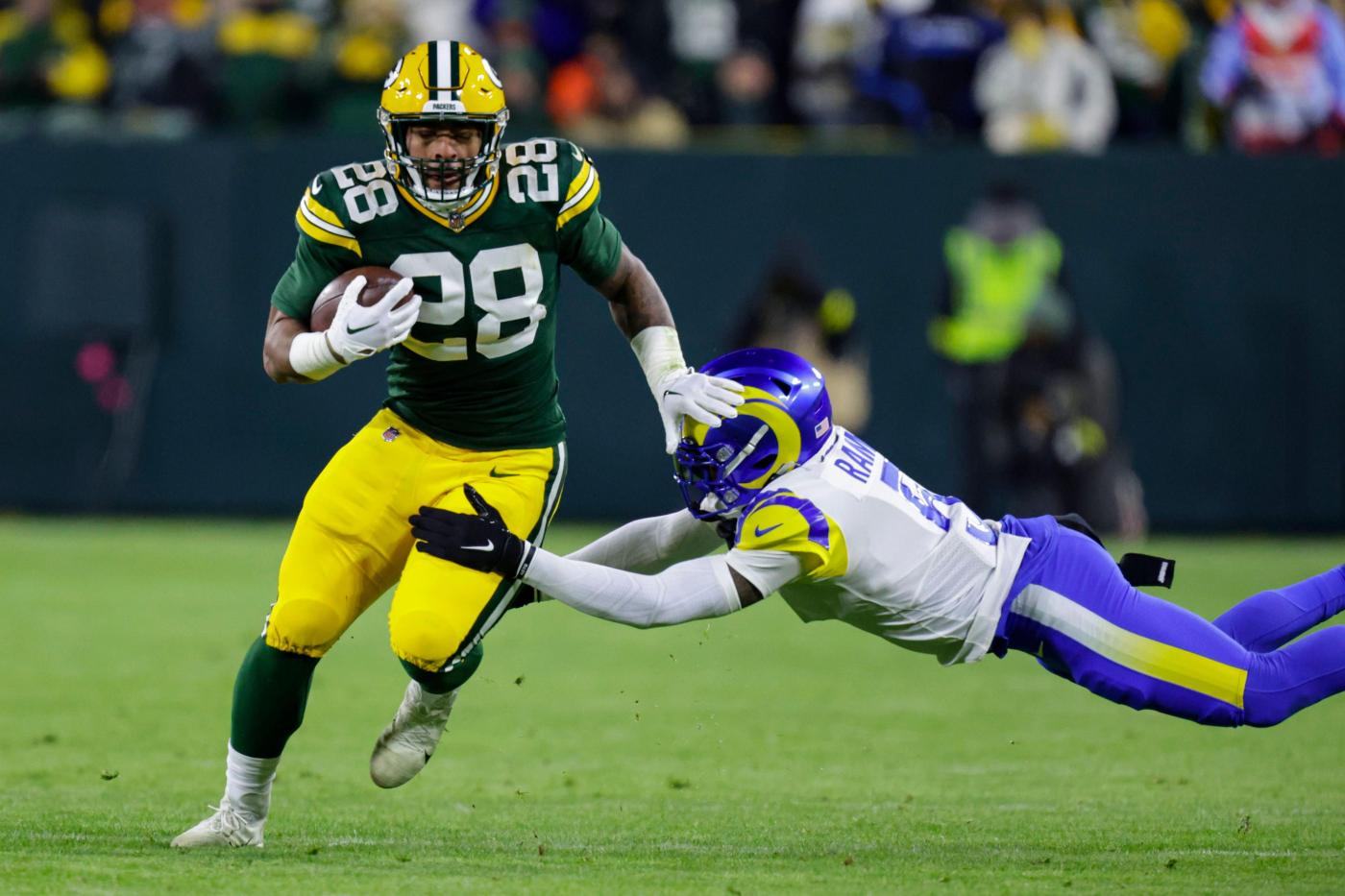 A.J. Dillon ran for two scores, Aaron Rodgers threw a touchdown pass to Aaron Jones and the Green Bay Packers kept their playoff hopes afloat with a 24-12 victory over the Los Angeles Rams on Monday night.

Dillon put the Packers (6-8) ahead for good with a tiebreaking 8-yard touchdown run in the second quarter and also scored from 1 yard out in the third quarter. He ran for 36 yards on 11 carries before leaving the game midway through the second half to be evaluated for a concussion.

The four-time MVP’s lone touchdown pass was a 7-yarder to Jones, who rushed for 90 yards and had four catches for 36 yards.

Rodgers’ latest Monday night victory came in freezing conditions. The temperature was 15 degrees with a wind chill of 7 just before the opening kickoff.

The Rams (4-10) have matched the highest loss total by any defending Super Bowl champion. When John Elway retired after leading the Denver Broncos to consecutive Super Bowl titles in the 1997 and 1998 seasons, the Broncos finished 6-10 in 1999.

Mayfield rallied the Rams to a 17-16 victory over the Las Vegas Raiders on Dec. 8, less than 48 hours after they claimed him off waivers from the Carolina Panthers. He wasn’t as effective Monday, going 12 of 21 for 111 yards with a touchdown and an interception.

He was sacked five times behind an offensive line missing center Brian Allen, who injured a calf on the first play from scrimmage. Preston Smith recorded two sacks for the Packers.

The Rams got field goals of 33 and 55 yards from Matt Gay, who also sent an extra-point attempt wide right. Gay’s 55-yarder matched the third-longest field goal anyone has ever made at Lambeau Field.

Mason Crosby had a 34-yard field goal for the Packers while playing in his 255th consecutive regular-season game to tie Hall of Fame quarterback Brett Favre for the longest streak in franchise history.

After Gay and Crosby traded field goals early in the game, the Packers pulled ahead thanks mainly to Dillon, the 6-foot, 247-pound running back whose bruising style thrives in this type of weather.

Facing fourth-and-3 from the 17, the Packers passed up a field-goal attempt and instead handed the ball to Dillon, who ran for 4 yards. Dillon then put them ahead for good with an 8-yard touchdown run in which he pushed Rams defenders backward for the last yard or so.

The Packers led 10-6 at halftime and broke the game open by scoring touchdowns on their first two drives of the second half. Rodgers’ 7-yard touchdown pass to Jones put them ahead 24-6.

The Rams cut the lead to 24-12 on Mayfield’s 8-yard completion to Tyler Higbee, the first touchdown catch by a Rams tight end this season.

Along with the Dillon and Allen injuries, Rams LB Jake Gervase injured an ankle late in the first half.

Packers OT David Bakhtiari missed a second straight game as he recovers from a appendectomy.

Rams: Host the Broncos on Sunday.

Packers: At the Miami Dolphins on Sunday.