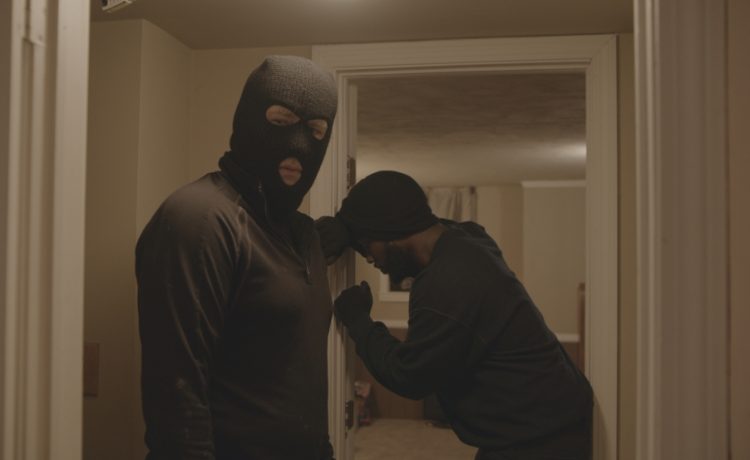 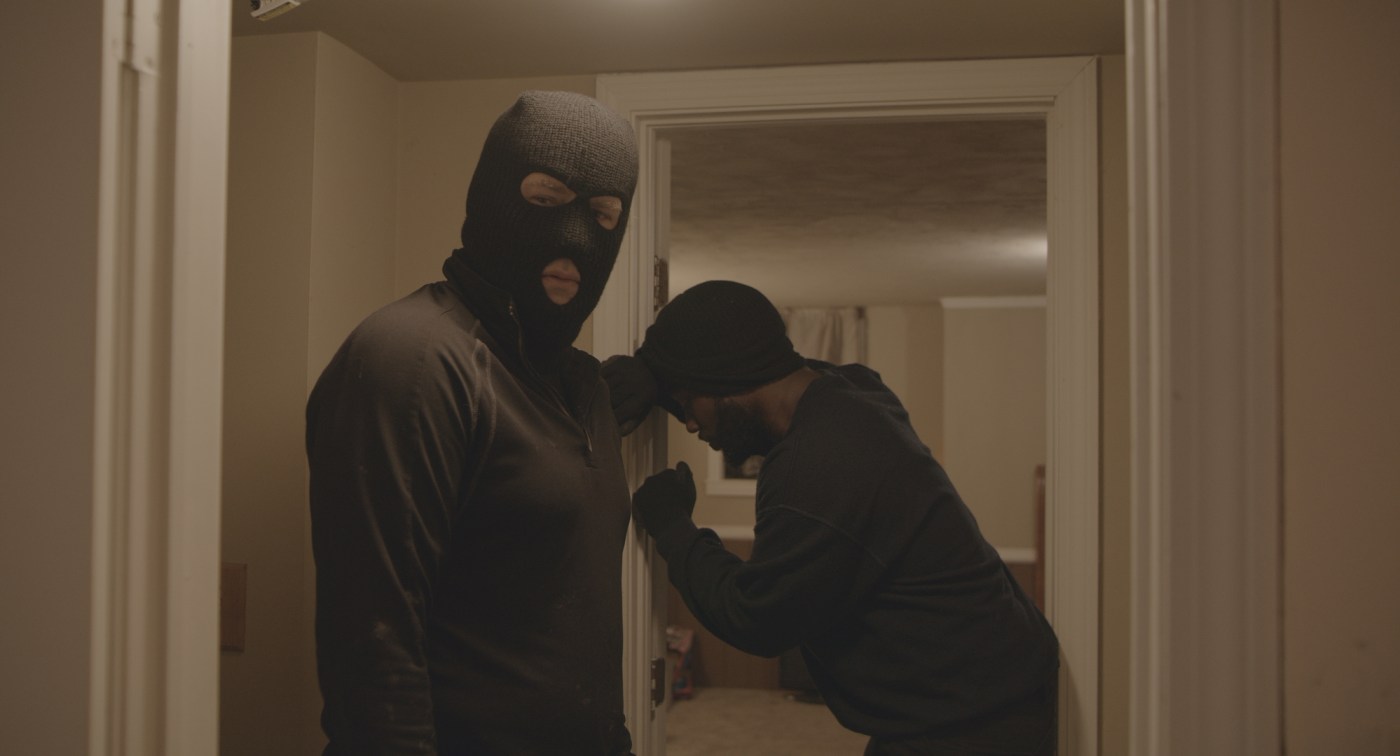 Not Rated. At the Somerville Theater.

Shot in 12 days in Boston and on the Cape and recipient of audience awards as IFFBoston and the New Hampshire Film Festival, “How to Rob” is the gritty feature debut of Boston writer-director and Emerson graduate Peter Horgan. The film tells the story of Boston boyhood friends Jimmy Winters (Joshua Koopman) and Sean Price (Chinaza Uche). Landscapers by day, gentleman-with-a-girlfriend Sean and slob-on-his-own Jimmy are a two-man stick up crew by night.

They meet as children when Sean asks Jimmy for help against two bullies and violent Jimmy hits a couple of home runs off the bullies’ heads. In opening scenes, featuring lots of Boston and suburban-area road signs, Sean and Jimmy, who live near Quincy, stick up a drug dealer who occupies his angry mother’s basement. The team’s conversation is littered with F-bombs. Jimmy, the clown prince of the partnership, farts a lot. Sean is more thoughtful and even-tempered. But like Jimmy, Sean is accustomed to violence. They take their orders from Ralph Judge (Kevin Nagle), who owns the Longfellow’s Pub in Yarmouth. Judge’s romantic and business partner Frankie (Vera Teixeira) wants Sean and Jimmy to settle their big bar tab. Their next job is a right-wing nut job with a stash of illegal guns. But Sean and Jimmy have a problem. Two Italian-American hit men for the Boston mob sitting in the now shuttered Domenic’s Restaurant talk about whacking a distinctive, white-and-Black stick-up team because of someone they hurt during a robbery. Sean and Jimmy’s luck might be about to run out.

Writer-director Horgan has a good eye and ear for the lives and language of low-life characters like the ones he has created for “How to Rob.” Aside from the occasional cliché, “How to Rob” sounds authentic and even Tarantino-esque at times. As Sean’s girlfriend Tina, Caitlin Zoz (Uche’s wife) adds a welcome romantic element. Tina wants Sean to go with her to Chicago to live and leave his life of crime, and Jimmy, behind. While Sean and Jimmy come across as authentic thanks in large part to the chemistry of Koopman and Uche, the Italian-American hit men, tossing the slang term “mamalukes” around, seem at times like dropouts from a Scorsese knockoff. Jacob Popoloski, on the other hand, adds to the narrative as the innocent stoner-next-door, who gets caught up in the violence.

Horgan has certainly soaked up a lot of influence from the Coppola-Scorsese-Tarantino trinity and given it a Boston tilt. Perhaps he might take a look of some of yet-to-be-filmed stories of Boston writers Dennis Lehane and Chuck Hogan for a future effort. In a nice touch, a psychic tells Sean that he and Jimmy have known and loved each other in different lives. Sean and Jimmy and the other characters in “How to Rob” have known each other in other films as well. With “How to Rob,” which at times recalls Scorsese’s early effort “Mean Streets,” Horgan has shown us that he has a flair for films about friendship and crime, Boston-style. I’m eager to see what comes next. A Q&A with cast and crew will follow the Thursday showing at the Somerville Theater.

(“How to Rob” contains violence, profanity, sexually-suggestive language and drug use)